FREDDIE WOODMAN wants to hit the bullseye with Swansea and then finish the season on a double.

His first target is to help the Welsh club win promotion to the Premier League. Then the keeper faces his hardest challenge … to beat the kit-man at darts! 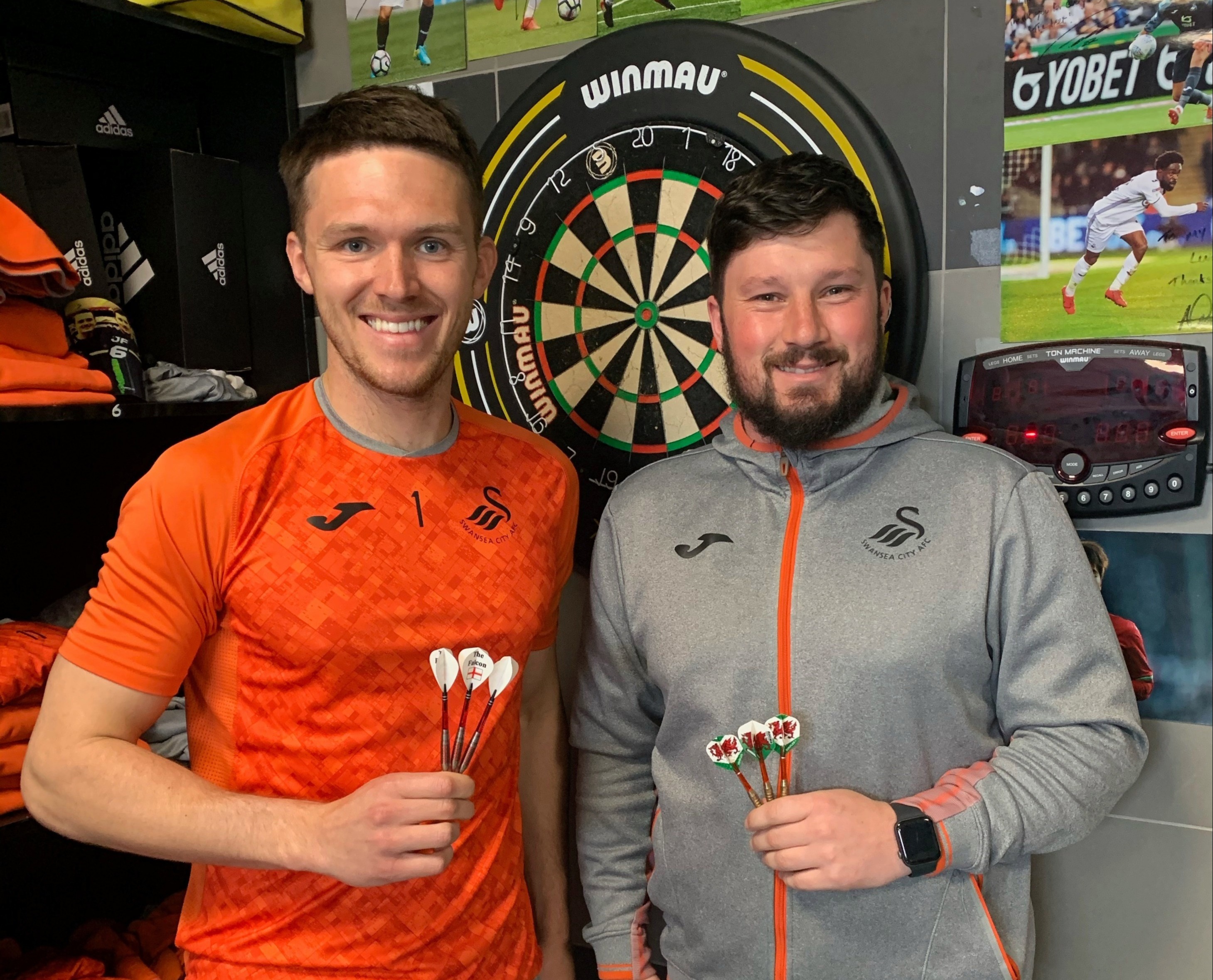 The on-loan Newcastle ace has even enlisted the help of Geordie darts star Chris Dobey.

But while he has been superb at shutouts on the pitch, his checkouts chucking arrows have left much to be desired.

Woodman calls himself The Falcon and got Puma to stitch that on to his boots.

Yet he is currently trailing Magic Mike – kitman Michael Eames – 46-30 in the season-long contest.

And he told SunSport: “When I was at Kilmarnock, I flat shared with Sean Longstaff, Callum Roberts (now Notts County) and Luke Hendry (now Grimsby) and we had a darts board so played all the time.

“It was, with no disrespect, the only thing you could do in Kilmarnock!

“I stopped playing but then came here and there’s a board in the kit room.

“Mike’s the main man of darts so we started playing every day and this season have kept a running total.

“I’ve been getting tips from Chris Dobey, a big Newcastle fan, and he sent me his darts to try to help me get in front of Mike.

“Hopefully I’ll reel him in before the end of the play-offs.”

Woodman got the idea to call himself The Falcon last season after on-loan Bournemouth striker Sam Surridge called himself The Eagle. 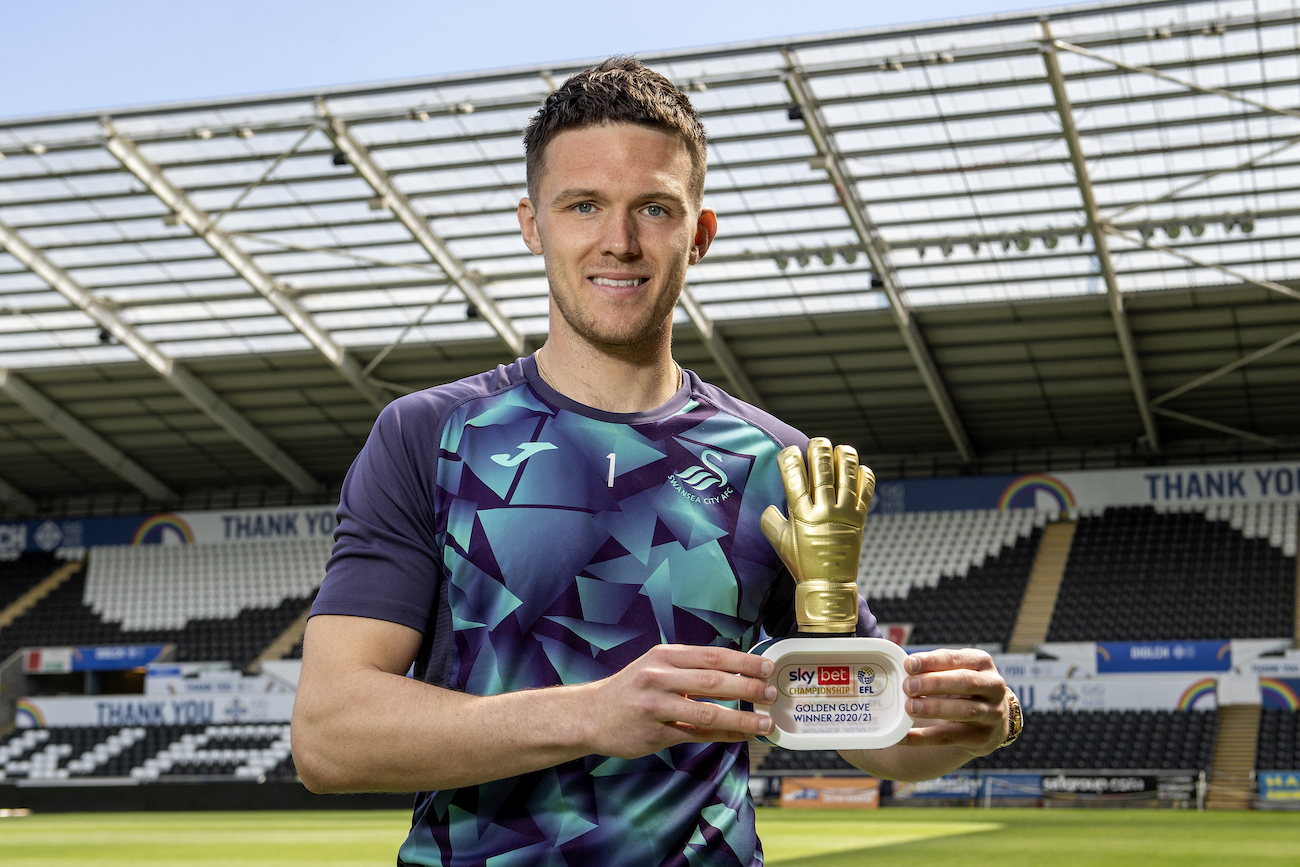 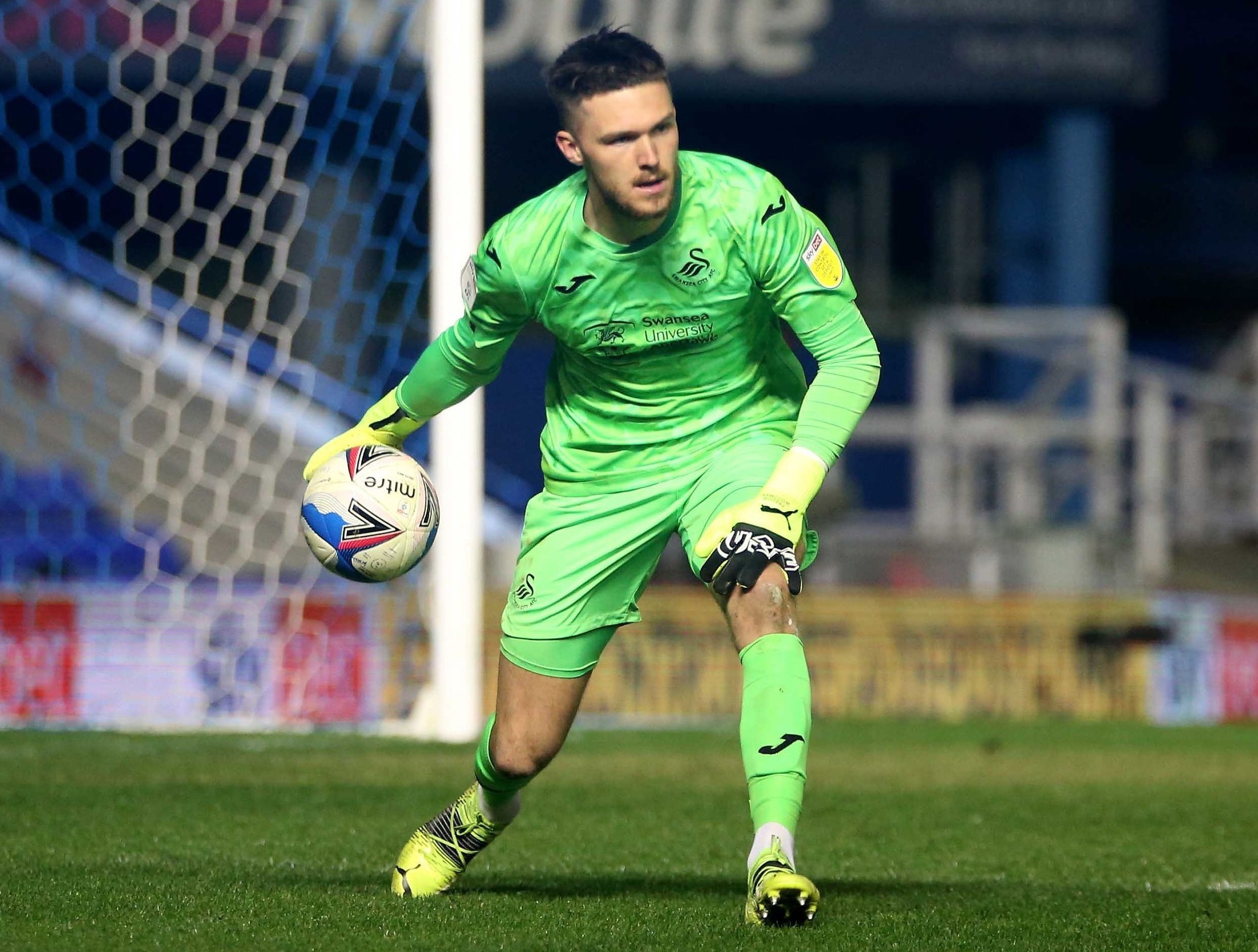 And he said: “I instantly thought, ‘Freddie The Falcon.’ I’ve now got my own darts shirt and flights with that written on it.

“Mike said, ‘You won’t get The Falcon put on your boots will you?’ Great idea – so I rang up Puma and am now running out with The Falcon on the side of my boots!”

Ironically, Woodman believes his best save of the season was against tonight’s play-off first-leg opponents Barnsley at Oakwell in January.

Woodman somehow managed to tip away a Callum Brittain 25-yard rocket in the 2-0 win – although he laughed: “I made a better save from our goalkeeping coach Martyn Margetson in the warm-up!”

But he has singled out his all-round performance in the 2-0 FA Cup win at Stevenage as his favourite.

He said: “That game will stay with me for a long time.

“Mike the kit man has become one of my best friends and he sadly lost his dad Nick that week and he wasn’t able to get to the game.

“Nick, who worked for the club, was my darts partner and we played for Mike’s local pub team.

“I saved a penalty and made top saves. That whole game will stay with me a long time.”

Woodman believes he has earned a name for himself after years living in the shadows of his well-known dad and famous godfather.

His father Andy was also a goalie who clocked more than 400 EFL appearances with clubs including Northampton, Brentford, Colchester and Oxford.

And he is also the godson of England manager Gareth Southgate.

But Woodman has now won his third career Golden Glove award – adding to those he won as England lifted both the Under-20 World Cup in 2017 and the Under-21 Toulon Tournament a year later. 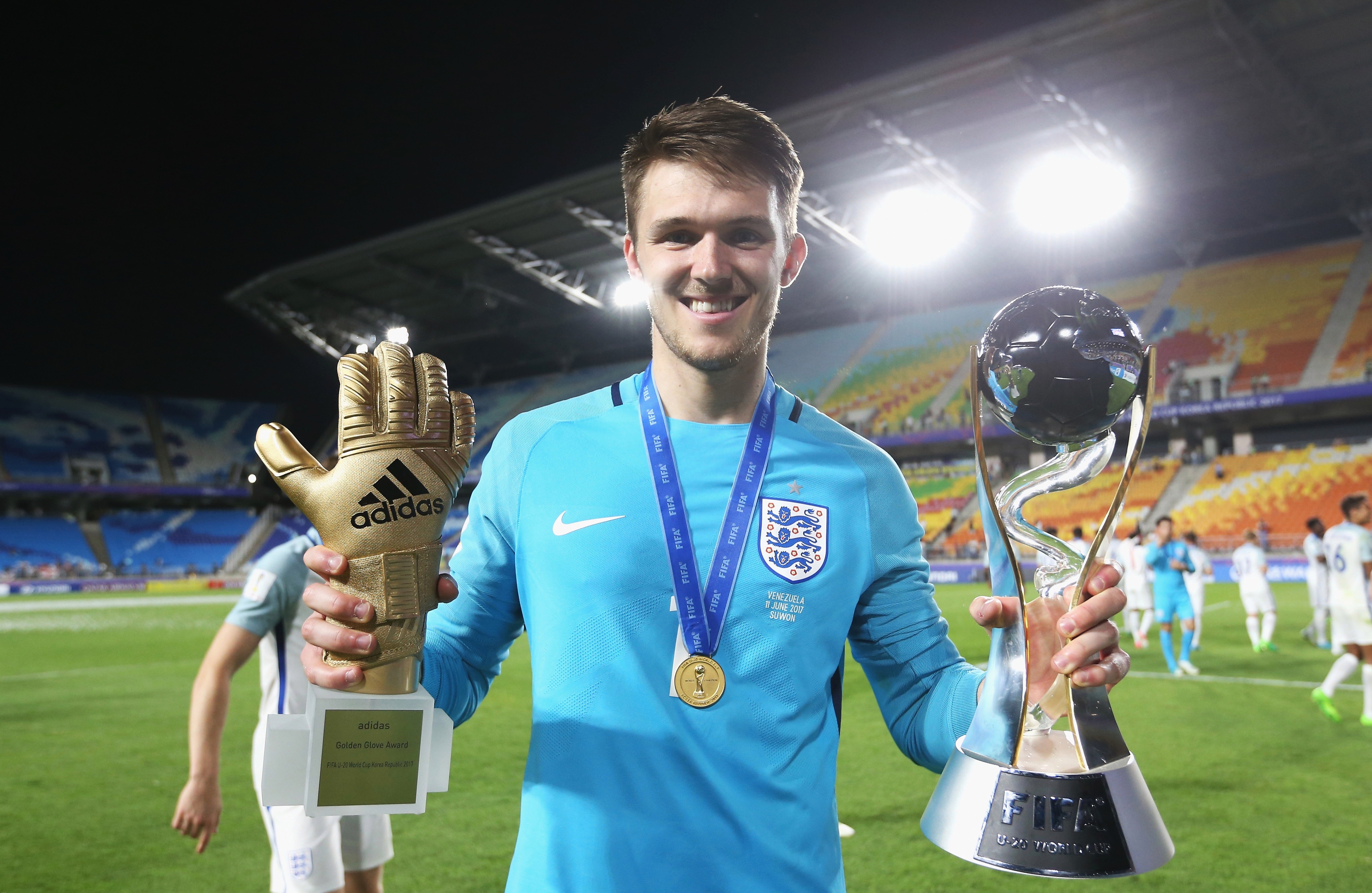 The keeper told me: “It’s been helpful having that football family background but hindered me too.

“I’ve gone to Newcastle and instead of being Freddie Woodman, I’m Andy Woodman’s son.

“And then when I played for England I wasn’t Freddie Woodman, I was Gareth Southgate’s godson.

“But you can’t pick your family.

“So I thought, ‘Let’s go and make that name for myself. How about win a World Cup and be Freddie Woodman.’

“I played for Newcastle reserves aged 14 and proved I wasn’t there because of my family but because I can stand on my own two feet as a keeper.

“Now I’ve won the Championship Golden Glove while playing a second full season with Swansea, hopefully I’m seen as Freddie Woodman rather than those other things.” 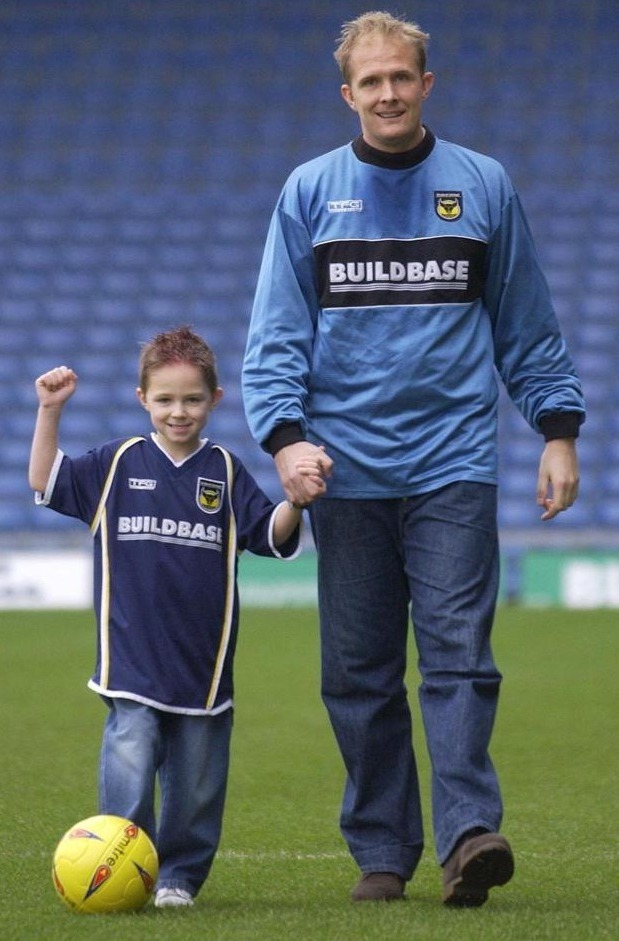 And although he had a decent playing career, Woodman believes he has regrets about not playing at the top level – and does not want him making the same mistakes.

He said: “Dad will call me 3pm on the dot every day after training, asking how I’m getting on, what did we do?

“Dad used to take me and my sister to school but rather than drop me off he’d take me training and I’d be around a football dressing-room environment.

“And when he took me home, mum thought I’d been at school all day!”

Southgate became Woodman’s godfather after becoming pals with his dad when they were together at Crystal Palace.

The Swansea keeper has not spoken to him since he played for the under-21s – and he said: “We kept it all professional but we’ve not spoken since.” 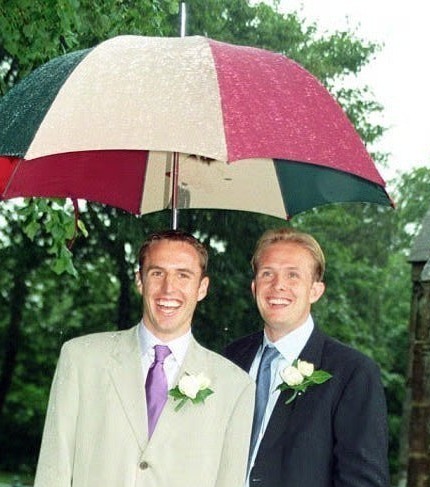 And he laughed: “I’m known as the youngest journeymen! But I’ve learned so much.

“During my first loan at Hartlepool I was washing my kit, getting the train to training, getting home 6pm and thinking, ‘This isn’t what I signed up for – this isn’t professional football is it?’

“At Crawley I got bashed up as an 18-year-old. Adebayo Akinfenwa cut my eye. I learned some lessons there.

“I went to Kilmarnock and learned how to play on a 3G pitch and got to play at Celtic Park with almost 60,000 in there.

“Then I went to Aberdeen – a team trying to win things rather than battling down the bottom."

And Woodman said: “When I was young, I looked at Joe Hart, Jack Butland, Peter Schmeichel. They all went out on loan and learned real football life in the lower divisions.

“I knew I had to do that. There wasn’t a day I was demotivated because I was washing my own kit or had to get the train at silly o’clock from Newcastle to Durham.

“Dad was always in my ear, ‘If you don’t work hard, you’ll end up playing in these leagues like I did!’ It motivated me because I want to play at the highest level.

“It’s funny because dad always told me, ‘Never be a keeper – there’s no money in it.’ And I had it in my head I was going to be working for my granddad’s roofing firm instead.”

Now he is on the brink of Premier League football.