China must remove its sanctions on Australian products to have any chance of improving relations between the two countries, Prime Minister Anthony Albanese has declared after joining the Quad summit in Tokyo with regional leaders to endorse a firm line against Chinese coercion.

Albanese issued the direct criticism of Chinese economic coercion while pledging stronger security ties with the United States, Japan and India at a summit that discussed the risks to the region from Beijing’s new security pact with Solomon Islands. 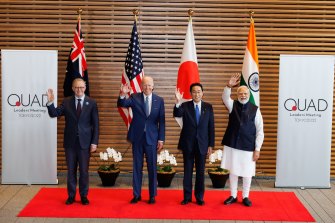 The meeting between Prime Minister Anthony Albanese, US President Joe Biden, Japanese Prime Minister Fumio Kishida and Indian Prime Minister Narendra Modi took a stronger line towards Russia over its invasion of Ukraine in a signal to China about the danger of any military action against Taiwan.Credit:Alex Ellinghausen

Striking a quick friendship with US President Joe Biden one day after taking office, Albanese promised greater action on climate change and more aid for the Pacific as ways to strengthen the Quadrilateral Security Dialogue between the four countries and gain support for the group in the region.

While Chinese Premier Li Keqiang sent a letter to Albanese on Monday to congratulate him on his election victory and seek “sound and stable” relations, Albanese responded with a pointed remark about Chinese restrictions on imports of Australian coal, barley, wine and other products in recent years.

“With regard to our relations, Australia seeks good relations with all countries. But it’s not Australia that’s changed, China has. It is China that has placed sanctions on Australia. There is no justification for doing that. And that’s why they should be removed,” he said.

The meeting of the four leaders, hosted by Japanese Prime Minister Fumio Kishida with Indian Prime Minister Narendra Modi joining Biden and Albanese, took a stronger line towards Russia over its invasion of Ukraine in a signal to China about the danger of any military action against Taiwan.

While India abstained in March from a United Nations resolution condemning Russia, it joined the Quad communique warning of the “tragic conflict” in Ukraine.

“We strongly support the principles of freedom, rule of law, democratic values, sovereignty and territorial integrity,” the four leaders said in a joint statement.

In a direct reference to Chinese military expansion in the South China Sea and its claims over Taiwan, the statement said: “We strongly oppose any coercive, provocative or unilateral actions that seek to change the status quo and increase tensions in the area, such as the militarisation of disputed features.”

Biden triggered headlines on Monday when asked in Tokyo if he was willing to “get involved militarily” to defend Taiwan and responded by saying: “Yes. That’s the commitment we made.”

Asked about his stance on Tuesday, Albanese said there was no shift in Australia’s position that there should be “no unilateral change to the status quo” but did not canvass the issue of a military response.

The Quad meeting was only the second face-to-face gathering of the grouping’s leaders after former prime minister Scott Morrison attended the first in Washington DC in September last year. Albanese used the occasion to commit his government to the partnership and invite the leaders to a Quad meeting in Australia next year.

Albanese acknowledged the Chinese pact with the Solomons came up and said his message to the security partners was that his government would add $500 million in aid to the Pacific and take greater action on climate change, a key issue that would help ties with the island nations.

Speaking to reporters after the formal Quad meeting and a working lunch with the other leaders, Albanese said the talks canvassed the atrocities in Ukraine and he had told the meeting that Australia had delivered on every request for assistance including the shipment of Bushmaster vehicles.

“Russia must pay a price for its actions. It’s as simple as that,” he said.

Albanese indicated he and Biden spoke to the Quad meeting about the importance of the AUKUS alliance on the development of a nuclear-powered submarine fleet for Australia, although he would not be drawn on a statement from British Prime Minister Boris Johnson on Monday that backed the idea of expanding the alliance into other fields.

Instead, Albanese emphasised his talks with Johnson on the phone on Monday and with Biden in Tokyo on Tuesday on the need for greater global ambition on climate change, naming this as a security issue rather than an environmental issue alone.

He said the other Quad leaders welcomed Labor’s pledge to reduce emissions by 43 per cent by 2030, a bigger target than the Morrison government.

“We know that China is seeking to exert more influence in the Pacific. And we know that climate change is such an important issue. I share the view that this is a national security issue,” he said.

“Climate change is not just about the environment, it’s about the shape of our economies, but also our national security going forward.”

With Albanese pushing for a stronger message on climate, the final statement from the Quad leaders promised to “deepen collaboration” in areas including climate resilience, saying this would help the region and contribute to growth.