Jack Bird feels like a new man. He looks like one as well; the former Shark has dropped five kilograms and added a moustache and a mullet, with the latter bringing what he considers a touch of Sydney culture to inner-Brisbane's uninspiring male hair scene.

"No one has hair like this up here. Only out in the bush," Bird insists. 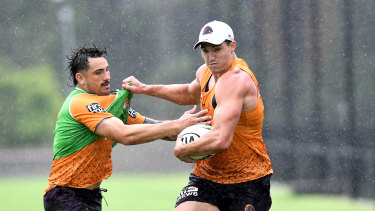 Corey Oates pushes away from the defence of Jack Bird at a soaked training session on Monday.Credit:Getty Images AsiaPac

"It's been a long time since I've been on the field. Hopefully I can get a season under my belt without any injuries."

Bird had asked Broncos coach Anthony Seibold about playing fullback before, with the coach showing little enthusiasm for the move. So it came as a surprise to Bird when Seibold turned the tables in pre-season.

"I started the pre-season at centre and out of the blue, Seibs came up and asked how I enjoyed playing fullback," Bird said. "It struck me a little bit because I didn't think he would give me a shot.

"I had tried speaking to him previously about it and he said no, so for him to have that belief in me to be able to come back from an ACL injury and play at fullback, I have to thank him for that."

Bird played some fullback as a junior and filled the jumper a handful of times for the Sharks when he first arrived in the top grade. But it has mostly been a learning experience through training, trials and watching some of the best in the business on video.

"I've done a bit of film on Teddy [James Tedesco], on RTS [Roger Tuivasa-Sheck] as well. I've looked at two elite fullbacks there and what they do and how they set up their play. I'm not there yet obviously but the more time I get there, the better I'll be.

"When I was young I played a little bit of fullback. I do enjoy it and I had to get my body in good shape to play there. I've shed five kilos and I'm back to 91kg. It's probably the leanest I've been and fittest I've felt."

Friday night will also see the Broncos debut of former Storm halfback Brodie Croft, who has been recruited to add some stability and structure, which Seibold hopes will be the difference between a top-four side and a team that will once again battle to make the top eight.