Pillage people! Not all ‘Vikings’ were Scandinavian – some were Scots who just jumped on the bandwagon, DNA study of skeletons reveals

Some ‘Vikings’ were not Scandinavian but Scottish people who had adopted Viking culture after the seafaring warriors invaded British shores, a new study shows.

A study of more than 400 skeletons at Viking burial sites across Europe found two Picts living in Orkney were buried as Vikings despite being of Scottish heritage.

The two men were buried with swords and other Viking memorabilia, suggesting they were respected as Vikings, despite not having Scandinavian ancestry.

Experts believe this shows the Vikings were not the murderous rabble we perceive them as, and were willing to mix with other cultures who accepted their way of life. 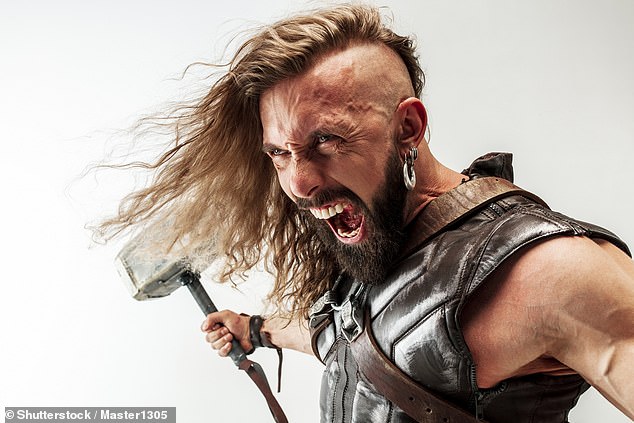 Study shows Scandinavian Vikings inherited genes from people who hailed from Southern Europe and Asia. As a result, the stereotypical image of burly blonde-haired folk (pictured) may be inaccurate as it is more likely that Vikings were brunette 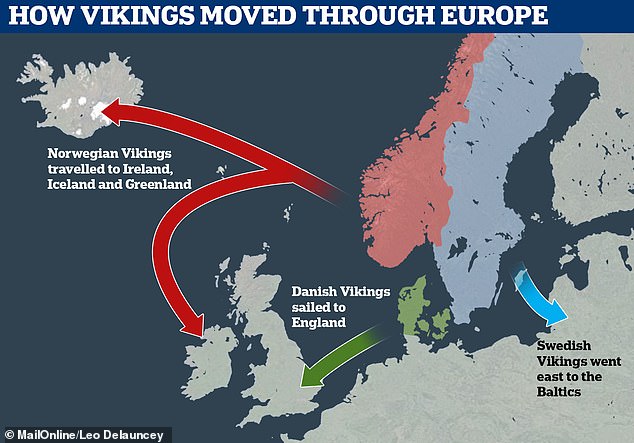 The study also reveals that Scandinavia was highly fragmented and different groups likely had little interaction with one another. It shows Vikings from Norway, Sweden and Denmark went and conquered different lands. The Danes went to England, the Swedes to the Baltics and the Norwegian natives conquered Scotland, Ireland, Iceland and Greenland

The study of Viking remains, which is the largest ever conducted, attempts to map genetic history of the now-extinct people.

The six-year project debunks the modern image of Vikings as brutal predators who travelled by sea from Scandinavia to pillage and raid, the researchers say.

Instead, the findings hint at a society that welcomed newcomers, with Picts appearing to benefit the most.

The Picts were Celtic-speaking people who lived in what is today eastern and northern Scotland during the Late British Iron Age and Early Medieval periods.

Dr Daniel Lawson, lead author of the study from The University of Bristol, explained: ‘Individuals with two genetically British parents who had Viking burials were found in Orkney and Norway.

‘This is a different side of the cultural relationship from Viking raiding and pillaging.’

As well as accepting outsiders into their midsts, the study also shows Scandinavian Vikings inherited genes from people who hailed from Southern Europe and Asia.

A lost Viking waterway that ran across Orkney and connected the North Atlantic and Scapa Flow 1,000 years ago has been discovered by archaeologists.

The canal-like network would have provided a shallow water routeway through which the Norse/Vikings were able to haul both their boats and heavy goods, such as grain.

Similar navigable waterways are known elsewhere in Scotland, for example, at Rubh an Dunain in Skye.

A team of researchers from the Universities of the Highlands and Islands, St Andrews and Wales worked to uncover the lost passage that formed an ‘ancient highway’.

The results showed that a complete route from Harray, through the Loch of Banks and including a portage at Twatt over to the Loch of Boardhouse into the earldom estates in Birsay was easily achieved.

A series of Old Norse place names, connected to the sea and boats, located in the middle of the Orkney Mainland initially drew the attention of the researchers.

Using the names, scientific methods, sensing, mapping and sediment samples allowed the team to discover a series of ancient waterways and canals.

Names with Viking origins are prevalent on the west mainland of Orkney which was a key area of power for the Norse Earls from the 9th to the 12th century.

As a result, the stereotypical image of burly blonde-haired folk may be inaccurate, as it is likely that most Vikings were brunette.

Professor Martin Sikora, a lead author of the paper and an Associate Professor at the Centre for GeoGenetics, University of Copenhagen, said: ‘We found that Vikings weren’t just Scandinavians in their genetic ancestry, as we analysed genetic influences in their DNA from Southern Europe and Asia which has never been contemplated before.

‘Many vikings have high levels of non-Scandinavian ancestry, both within and outside Scandinavia, which suggest ongoing gene flow across Europe.’

As a result of this plentiful passing of genes, the study shows the Viking DNA lives on in people living not only in Scandinavia, but in the nations the Vikings conquered.

The researchers estimate that in the UK population six per cent of a person’s DNA is of Viking origin. For Swedes, this figure is ten per cent.

The study also reveals that Scandinavia, home of the Viking culture, was highly fragmented, and different groups likely had little interaction with one another.

It shows Vikings from Norway, Sweden and Denmark went and conquered different lands.

The Danes went to England, the Swedes to the Baltics and the Norwegian natives conquered Scotland, Ireland, Iceland and Greenland.

The age of the Vikings spanned more than two centuries, from around 750 AD to 1050 AD, shortly before the Norman Conquest of England.

They were excellent seafaring warriors with a knack for adapting to any environment.

In Greenland, for example, the Vikings survived until the 1400s and made a living by trading the ivory from walrus tusks.

It is known that the Vikings had great success marauding around Europe. King Cnut, for example, was one of England’s first true monarchs.

Professor Willerslev concluded: ‘The results change the perception of who a viking actually was. The history books will need to be updated.’

The research has been published in Nature.

During this period many Vikings left their homelands in Scandinavia and travelled by longboat to other countries, like Britain and Ireland.

When the people of Britain first saw the Viking longboats they came down to the shore to welcome them.

However, the Vikings fought the local people, stealing from churches and burning buildings to the ground.

The people of Britain called the invaders ‘Danes’, but they came from Norway and Sweden as well as Denmark.

The name ‘Viking’ comes from a language called ‘Old Norse’ and means ‘a pirate raid’.

The first Viking raid recorded in the Anglo-Saxon Chronicle was around 787 AD.

It was the start of a fierce struggle between the Anglo-Saxons and the Vikings.

Related posts:
September 16, 2020 Lifestyle Comments Off on Not all 'Vikings' were Scandinavian – some were Picts
Celebrity News:
Times Square New Year’s Eve organizers say event will go virtual, no crowd on scene
Stacey Dooley: Strictly winner exclaims ‘I bl**dy give up’ after seeing tough competition
Larissa Lima SLAMS Claims She Staged ICE Arrest: Stop the Death Threats!
Jenna Lyons Has a New Job, and It's All About False Lashes
BTS Sends Encouraging Message Amid COVID-19 Crisis at 2020 United Nation General Assembly
Recent Posts
This website uses cookies to improve your user experience and to provide you with advertisements that are relevant to your interests. By continuing to browse the site you are agreeing to our use of cookies.Ok