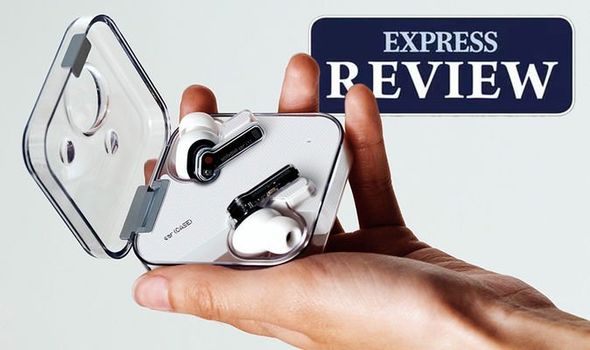 Billed as “the sound of change” start-up brand Nothing wants to be a breath of fresh air in the wireless earbuds game. The company was founded by Carl Pei, who knows a thing or two about consumer technology having co-founded Android giant OnePlus. Nothing’s first product in a planned “ecosystem” of gadgets is an AirPods competitor called ear (1). These seriously stylish earbuds are packed with loads of premium features and priced at just £99 to try make their mark in the competitive category. Every limited drop so far has sold out in minutes.

But can the buds live up to the hype? Express.co.uk got our hands on a pair ahead of their wider release this month and has been putting them to the test this week to find out.

First off, we have to talk about the looks. Ear (1) is supposed to be an antidote to the lack of different designs in other earbuds. To that end, they come with a unique transparent outer shell to reveal some of their finely-tuned inner workings.

It’s a great idea when it comes to the square case, because you can always tell whether your buds are in it when tossing it in your bag. But on the buds themselves, it’s not quite as eye-catching as you might think. Only the stem is transparent, with most of the rest of the bud still opaque. To our eyes, the white-tipped silicon earpieces still look pretty similar to AirPods.

One nice touch is the red dot that marks the right earbud. It can be a real pain to squint at other bud brands to make out the tiny ‘L’ and ‘R’ – so this seems an obvious upgrade that’s sure to be copied across the industry.

The transparent case charges the buds wirelessly and can hold 34 hours of charge. It’s Qi compatible, too but if you don’t own a wireless charger then a plain old USB-C cable works just as quickly and smoothly. The earbuds themselves boast 5.7 hours of listening time – dropping if noise cancellation is turned on – which is pretty comparable to competitors. Although the case looks great, popping the buds in can be a little tricky as they sit sideways – some fiddling is required especially if you’re on the move.

The buds are ultralight at just 4.7g each and very comfy in the ears. They come with three options of small, medium and large tips to fit all ear sizes. In one of the most important tests for earbuds, they felt snug and didn’t budge an inch through several gym sessions, eating and walking around.

Like other brands, the ear (1) can be controlled through simple touch gestures. Two taps pauses and plays, three skips a track and a quick slide of the finger adjusts the volume. These were quick to remember and although there were a few snags (admittedly maybe because of our butterfingers) overall it worked seamlessly.

Onto the big question: how’s the sound? Again, for the price the ear (1) excels. Its tiny speakers with an 11.6mm driver were designed from scratch by Teenage Engineering, an electronics maker specialising in synthesisers used by the likes of Depeche Mode and Bon Iver. Nothing told Express.co.uk the goal was to ensure music wasn’t distorted and kept to the original artists’ vision.

This held up in our review. Much like any earbud, the bass isn’t the best and you would never confuse the quality with over-ear headphones. But music was balanced and crisp no matter what genre we played.

Customisation is possible through the EQ option on the app. You can choose between four options: balanced, more treble, more bass and voice. It’s simple to use, but we would have preferred more options and maybe even sliders to really fine-tune the sound.

Active Noise Cancellation (ANC) was a big selling point for these buds and what’s meant to decisively set them apart from competitors at the same price point. The three built-in mics emit sound to cancel out, not just block, background noise. Again, the app provides four options: off, light, maximum and “transparency”, which allows voices through.

While the ANC worked well, effortlessly blocking out traffic, background construction noise and the blaring dance music at the gym, we couldn’t tell much difference between the modes. However, the “maximum” option in particular did reduce music sound quality a touch. But overall, it’s an excellent feature at this price point and one lacking from Samsung’s Galaxy Buds+ (£99) and Google’s Pixel Buds A-Series (£139).

But now for the downsides. Phone calls, unfortunately, were a mess. Voices sounded warbly and cracked through the buds, while the sound quality on the other end was distorted. It’s disappointing given ear (1)’s marketing boasts of high-definition mics and sound-improving algorithms. Of course, this is a common complaint even for the much more expensive AirPods – but we ended up swapping to wired earphones for Zoom meetings.

Fast pairing was another hitch. The buds use the latest 5.3 Bluetooth connectivity, and Android phones are supposed to pair right away by simply holding them near the ear (1) case. After a couple of attempts, we gave up and paired through the Bluetooth menu, which was painless.

There were more hiccups while using the buds. Several times when trying to reconnect to a phone the ear (1) wouldn’t play sound, or took a while to register the connection. This meant a few rounds of switching Bluetooth on and off to make sure they were synced. On a few occasions the sound dropped off for a second or two at random – just long enough to be annoying.

However, we were overall impressed with ear (1) – especially as they are less than half the price of Apple’s AirPods Pro. Great for everyday use, commuting and the gym, we can see these becoming a serious choice for style-conscious users who want a low-effort earbud. We can’t wait to see what Nothing comes up with next.

The ear (1) will go on sale in Selfridges online and in-store from 7th August 2021 priced at £99. There will also be limited drops at kith.com on 7 August at 4pm and mrporter.com on 13 August at 8am.