NSW's plans to drive 12 gigawatts of new renewable energy into the grid has propelled the state to the top of the nation's ranking for investor confidence in the sector.

The Clean Energy Council's annual poll of 60 organisations showed NSW overtaking Victoria as the most attractive state to invest in with a rating of 7.6 out of 10. Its southern neighbour was equal second with Queensland at 6.5. 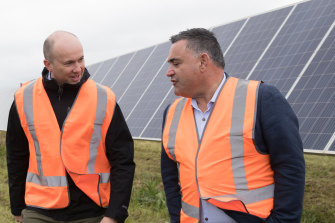 The survey was taken in November and came as the Berejiklian government prepared to pass legislation on NSW's energy roadmap that seeks to attract as much as $32 billion in private funds, in particular to three large renewable energy zones.

It preceded the Andrews' government's own $1.6 billion to support for renewables and energy efficiency in Victoria's budget late last month.

Nationally, confidence to make investments over the next three years was up from a year ago at 6.7, but lower than it was in July when the mean score was 7.3. A lack of a long-term integrated federal energy and climate policy was cited as among the top business challenges.

"It's been a pretty extraordinary last month in terms of states' ambitions" for renewable energy, Kane Thornton, the Council's chief executive, said, adding that the NSW energy plan was "a big game changer".

The leading concern remains grid connections and meeting technical requirements as new wind and solar farms jockey for access to the national grid. 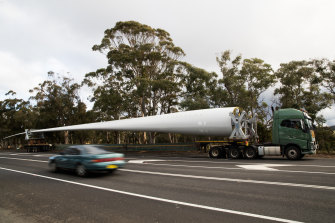 A truck carrying a giant blade for a new wind turbine bound for western NSW, in June 2020.Credit:Janie Barrett

The tumbling price of new renewable energy and also of batteries has reduced the roles of both coal and gas out of the national electricity market.

With the power sector accounting for about one-third of Australia's greenhouse emissions, its tumbling use of fossil fuels has contributed most of the national gains in cutting carbon pollution in recent years, the Morrison government said this week.

For instance, new modelling led the government to revise upwards its projection of the total capacity of rooftop solar panels that will sit on Australia's homes in 2030 by 60 per cent to 24 gigawatts, from a forecast of 15GW made a year earlier.

"That's an amazing result" given installations "dropped like a stone" in Melbourne for at least two months during the second, extended COVID-19 lockdown, Mr Edis said.

This year's large-scale solar and wind farm connections, though, will likely trail 2019 total, as congestion in some parts of the grid stalled connections, he said.

Victoria's Energy Minister Lily D'Ambrosio said her state's budget contained the largest allocation of any jurisdiction in the country to aid the take-up of clean energy.

"This is record funding for the grid that will unlock six renewable energy zones and transmission solutions to address bottlenecks and continue to attract investment in renewables," she said.

One sign of a near-term slowdown in the rapid expansion of the industry is that about 54 per cent of those polled by the Clean Energy Council said they expected to expand employment over time and 13 per cent forecast a cut in jobs.

A year ago, 70 per cent of those surveyed predicted an increase in employment while at the end of 2018 that share was 83 per cent.

Most Viewed in Environment