Australia’s outrage at the way UNESCO is raising alarm over the risk from climate change to the Great Barrier Reef misses the greater point – that the crowning glory of the world’s coral reefs is being torn apart by global warming.

The United Nations Educational, Scientific and Cultural Organisation (UNESCO) released a draft decision to downgrade the reef’s World Heritage status to “in danger on Tuesday”, citing climate change as a crucial factor. 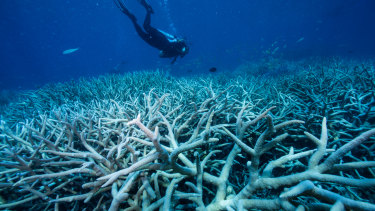 The warning is a big risk for the federal government in key marginal electorates in Queensland. If the listing is ratified by the World Heritage Committee at their next meeting in July, Australia risks losing even more face over its refusal to up its emissions reductions targets in line with other wealthy nations, and also lose a chunk of more than $6 billion in tourism and that the reef pulls in each year, supporting an estimated 60,000 jobs.

Environment Minister Sussan Ley came out swinging on Tuesday morning. Although she agreed climate change is the leading threat to the reef, she also pointed out China’s influence in leading the listing panel, and complained of an unscientific process where UNESCO failed to send inspectors to the reef or to conduct monitoring before dropping its bombshell danger warning.

But Ley’s complaint does not change the fact 21 nations determine UNESCO’s listing, which is based on the scientific advice from eminent, independent experts.

While UNESCO has subverted the normal process, its move is not a surprise.

It flagged in 2015 that Australia’s upcoming Outlook Report would be critical to the reef’s status when it listed the reef’s outlook as “poor”; it downgraded this in 2019 to “very poor”.

Scientists agree the reef is well-managed but point out the impacts from climate change are so dire that only immediate action to reduce global warming can save it.

Three mass bleaching events since 2016 show the reef cannot recover at this rate of change. Around half the reef’s shallow water corals have already been lost.

Of the world’s wealthy nations, only France and Japan have coral reefs and the rest live in waters of developing nation. This means Australia is unique in being rich and without a commitment to hit net zero emissions by 2050.

Questions over the fairness of the diplomatic process are irrelevant to the bigger picture painted by the reef’s in danger listing. Australia risks being labelled an international climate change pariah.

Related posts:
June 22, 2021 Lifestyle Comments Off on Outrage at UN’s Barrier Reef warning a sideshow to climate catastrophe
Celebrity News:
What Is Offset's Real Name?
How Did Courteney Cox Meet Boyfriend Johnny McDaid? What Is Their Age Difference?
It Was Love at First Sight When Track Athletes Tara Davis and Hunter Woodhall Met at Age 16
Scooter Braun Officially Files For Divorce From Yael Cohen – & Already Has A Prenup In Place!
OMG! Prince William Is Also Writing a Book After Harry's Memoir News
Recent Posts