For a moment, it looked like Federal Parliament had come together to hail the Victorian community for crushing the second wave of the coronavirus pandemic and even thank the Premier, Daniel Andrews, despite the rancour over his lockdowns.

But the paper covering the political divide was torn within minutes. 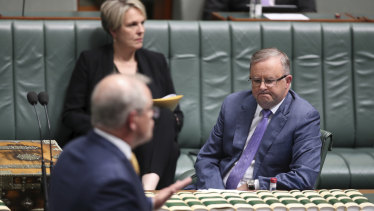 Anthony Albanese opened question time on Tuesday with an unusual move. Rather than challenge Scott Morrison with questions, the Labor leader asked the Prime Minister and all others to support a motion congratulating the state.

The motion noted the hardship Victorians have been through and conveyed "gratitude to the people of Victoria on behalf of a grateful nation" in a message to be sent to Andrews.

A government's usual response is to dismiss these motions and move on to other business. Albanese may have counted on this reaction so he could ask Morrison why he would not thank Victorians.

But Morrison accepted the dare. With a brief word, the government granted Albanese leave to speak.

Albanese spoke well on a motion the government should have moved.

"Victorians have indeed paid a price but now they reap the benefit," he said. He cited the fall in the state's daily case numbers from 723 in July to zero on Tuesday, over the same time the United Kingdom's case numbers have soared from 846 to 20,890 a day.

"That's why the sacrifice of Victorians should be acknowledged by our national Parliament, because the whole of Australia has benefited from this sacrifice," he said.

Albanese praised the "sensible" approach Andrews took on Sunday when he delayed the emergence from restrictions, but seemed to run out of things to say. He did not use all the 15 minutes allotted to him – and the government benches noticed.

"You've got another eight minutes, mate," called Damian Drum, the former AFL player and coach who is now the Nationals MP for Nicholls, in and around Shepparton.

Morrison chose to lead the reply. After months of federal sniping at Andrews, he could hardly lead with praise for the Premier. He pitched his message to the people instead, praising their resilience, determination and patience.

The interjections began as soon as Morrison mentioned national cabinet, the forum where he has been at odds with Andrews over school closures and business shutdowns.

"I would urge those opposite to cease the interjections because we are at one on this," Morrison said.

"What a fake," called one Labor MP in reply.

Morrison mentioned the state failures in hotel quarantine and contact tracing. A few Labor MPs interjected to suggest he mention the federal failures in aged care, too.

But Morrison was not out to provoke a political fight. He spoke well. Perhaps this fuelled the frustration among his opponents. The heckling grew louder.

While the Prime Minister thanked the Premier, he emphasised that this week's reopening should only be the first of three stages. And he had a message for all state leaders.

"Borders and lockdowns are not demonstrations or evidence of success," he said. "They are evidence of outbreaks that have got out of control.

"We cannot look to a future of lockdowns as a way of managing this virus."

In a remark that Labor later complained was overtly political, Frydenberg rejected the comparison of Victoria with the UK. He argued the comparison should be with NSW, Queensland and other states that kept outbreaks under control.

Albanese did not catch Morrison and Frydenberg by surprise. They made the most of the opportunity he offered.

"And the more than 800 Victorians who have lost their lives: their families will never get those ones back, and it all comes back to the failures in hotel quarantine for which we still do not have any answers."

Frydenberg was powerful and pointed: the failures could not be ignored. This was one of his best speeches in Parliament, but he infuriated an Opposition that wanted to honour Andrews, not find fault. He had no thanks for the Premier.

"I got a text message from a friend of mine the other day who said that a friend of his had taken his own life because he had lost his job in Victoria," he said.

That went too far for some Labor MPs. They saw it as a ploy to use mental health to make a political point. But Frydenberg was exasperated, even angry at what had happened to his home state.

As the Treasurer talked of rising unemployment in Victoria compared to job creation elsewhere, someone interjected: "So what?" Frydenberg leapt on the remark to become even more forceful.

These were not the speeches Labor probably wanted. Albanese did not catch Morrison and Frydenberg by surprise. They made the most of the opportunity he offered.

But the bipartisan moment carried an undercurrent of animosity. Every interjection revealed this bitterness. The truth is that Federal Parliament is struggling to bridge a growing gulf in the national answer to a global pandemic. It cannot agree even when it claims to unite.