ROBERT HARDMAN: Peter Bowles was the TV charmer whose career survived standing up Marlon Brando, snubbing Quentin Tarantino — and saying no to The Good Life

His career spanned plenty of roles playing a baddie and even more playing a toff. To most people in Britain of a certain age, however, he would always be the socially awkward refugee-turned-millionaire, Richard de Vere, in the phenomenally popular early-Eighties sitcom, To The Manor Born.

At the height of his fame — which came relatively late in life — he was fighting off female admirers and even had an impressive Hollywood fan cub, too.

Yet, through it all, Peter Bowles — who has died of cancer at the age of 85 — remained resolutely devoted to the stage and to his family in equal measure.

An uxorious workaholic, he was seldom happier than when pottering around his West London home in the company of the unchallenged love of his life, Susan, with whom he celebrated 60 years of marriage last year.

Superficially, Bowles seemed blessed with those two essential attributes of theatrical success: good fortune and work. He held the record for the oldest actor to enjoy star billing in a West End production at the age of 81.

His career spanned well over half a century — from his debut appearance in Romeo And Juliet at the Old Vic in 1956 to last year’s cinema release, Off The Rails. 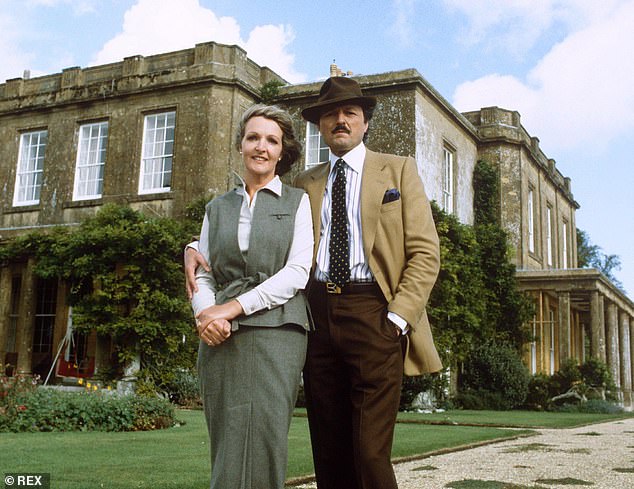 His career spanned well over half a century — from his debut appearance in Romeo And Juliet at the Old Vic in 1956 to last year’s cinema release, Off The Rails. Pictured: With Penelope Keith in To The Manor Born

Yet, by his own admission, he also had a talent for squandering heaven-sent opportunities. Back in the 1970s, Bowles was simultaneously offered the choice of appearing in a new Alan Ayckbourn play or a new BBC sitcom called The Good Life. He chose the former, paving the way for Paul Eddington to take on the role of the long-suffering Jerry, and then to enjoy further success in Yes, Minister and Yes, Prime Minister.

In later life, Bowles was sitting in a West End pub having just ordered a pint and a ham sandwich when he was approached by a familiar figure dressed in jeans.

‘I’m so sorry to disturb you, Mr Bowles,’ said the stranger, ‘but I am a huge fan of yours. Oh, my name is Quentin Tarantino, by the way. I was sitting in the restaurant across the road with my girl when I saw you come in here, and I wondered if you would care to join us for a spot of lunch.’

Bowles explained that he had only just ordered a sandwich, so it might be difficult. As he wrote in his autobiography, Ask Me If I’m Happy, Tarantino replied: ‘OK, fine. Rain check. Love your work.’ And with that, he was gone. ‘I could have been a killer in movies but somehow I didn’t want to disappoint the waiter,’ Bowles reflected.

On another occasion, Marlon Brando, also a big fan, was staying in London and requested a meeting via Bowles’s agent. The receptionist who answered the phone failed to pass on the message. 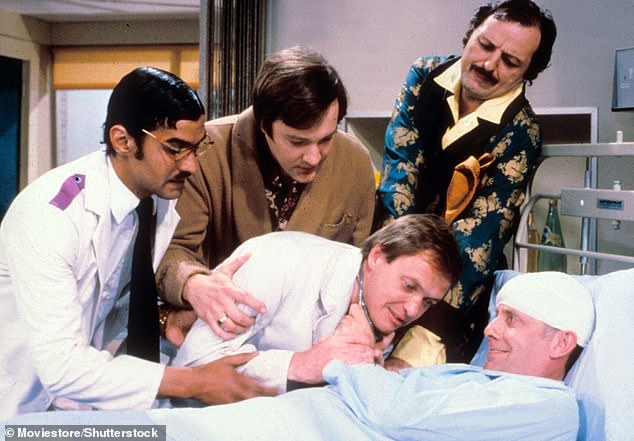 Yet, by his own admission, he also had a talent for squandering heaven-sent opportunities. Pictured: Peter Bowles in the ensemble cast of Only When I Laugh

Bowles only learned about the blunder years later when Michael Winner asked him why he had never turned up for his ‘audition’ with Brando. ‘I learnt from Mr Winner the date of the lunch — I could have been available — and will regret this missed chance all my life,’ he wrote ruefully.

However, the gods of stage and screen were looking down on the day he was offered the male lead in To The Manor Born, alongside that Good Life star whom he had previously passed up, Penelope Keith (or ‘Penny’ as he called her).

The series was a colossal success as soon as it hit British screens in the autumn of 1979, just as Mrs T was settling in at No 10.

The plot was a comedy of manners with light romantic undertones, featuring Bowles as a newly widowed self-made tycoon who buys the ancient Grantleigh estate from newly widowed aristocrat, Audrey fforbes-Hamilton (Penelope).

Having fallen on hard times, she has downsized to the Old Lodge on the edge of the estate, but has never really surrendered her role as lady of the manor. And thus, over 20 episodes, the two characters mine that rich seam of comic entertainment, the British class system, for all its worth.

Surprisingly, the series came to an end after just two years and three seasons. The grand finale, in which Richard and Audrey become engaged and then marry, was one of the great television moments of 1981, eclipsed only by the real-life union of the Prince and Princess of Wales four months earlier.

And then they went their separate ways, reuniting in 2007 for a one-off Christmas special to mark the de Veres’ silver wedding anniversary. However, Bowles’s career had been transformed.

‘The extraordinary success released a new confidence in me,’ he later admitted. He even fulfilled a lifelong dream by buying himself a Rolls-Royce, though he soon found it too conspicuous. Six months later, he traded it in for the first of the eight Porsches he would own over the rest of his life.

Plum roles were plentiful, including Lytton’s Diary, based on this newspaper’s very own Nigel Dempster, and The Irish RM. He was invariably cast as posh, rakish, often a bit of a cad — but usually a charmer. No newspaper article was complete without words like ‘debonair’ and ‘man-about-town’.

Yet, the irony was that he had been anything but ‘to the manor born’. As he was always the first to explain, he had been born into a family of working-class grafters. His father had been a valet to what he called a ‘hell-raising’ son of the Earl of Sandwich, while his mother had worked as a nanny for the future Duke of Argyll. 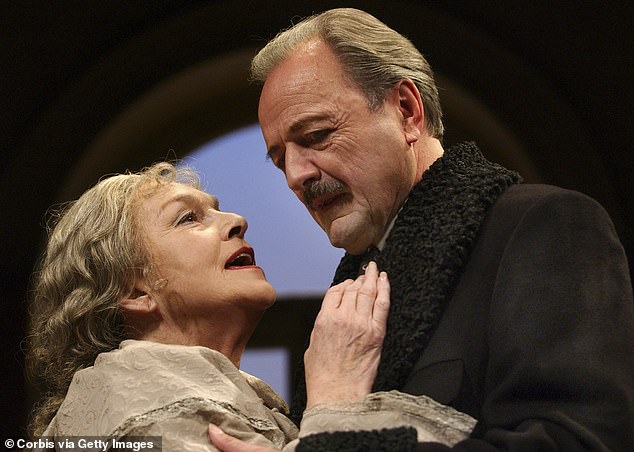 He seemed destined for a life of supporting roles on stage and television bit-parts, usually playing a villain. Pictured: With Barbara Jefford in a production of The Old Masters

They became an item before the war at an event which sounds like something straight out of Downton Abbey, the ‘Servants’ Ball’ at the Royal Albert Hall.

The young Peter grew up in staff cottages and a council house in a run-down part of Nottingham when his father started work at the local Rolls-Royce factory.

A bright boy, Peter won a scholarship to the local grammar school — where he appeared in a school play with the future satirist, John Bird — and then another one to RADA in order to fulfil his dream of being an actor.

His contemporaries included Albert Finney, Alan Bates and Peter O’Toole, just at the moment when stage and screen wanted a new breed of rougher, grittier actors. It was Bowles’s bad luck that he had worked hard to turn himself into an old-school well-spoken actor.

‘While the others were all developing into rebels,’ he said, ‘I came out perfectly trained for Rattigan drawing-room comedies of the kind they stopped doing in the year I was first looking for work.’

He seemed destined for a life of supporting roles on stage and television bit-parts, usually playing a villain. Yet, in those early years, he fell for a young actress called Susan Bennett — albeit while still in a relationship with a beautiful but schizophrenic ex-circus strong-woman. After a somewhat tempestuous courtship, he married Susan in 1961 and they went on to have two boys and a girl. 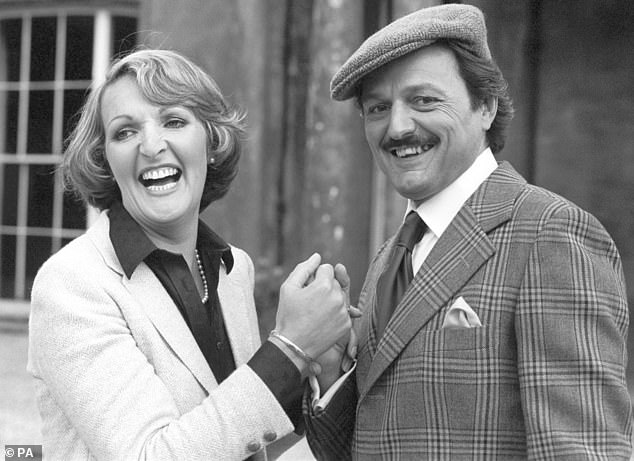 Penelope Keith, as Audrey Fforbes-Hamilton, with Peter Bowles filming for To The Manor Born, on location at Cricket House, Cricket St Thomas, Somerset

Although Susan’s career looked more promising than her husband’s, she waved goodbye to a role at the Royal Shakespeare Company because Peter was terrified she might be wooed away by a glamorous co-star. Instead, Susan got a job as a secretary to help pay the bills while Peter sought bigger and better roles.

He would be 43 by the time he landed the big one. From the day the credits opened on To The Manor Born, he would never look back, though he always felt his true home was on stage.

He hated being defined as a ‘sitcom star’, and when he was introduced as ‘Peter Bowles, the TV actor’ at a celebrity gathering, he and Susan stood up and left.

His autobiography closes with a quote from a rave review from the theatre critic of The Times many years after Richard de Vere had faded from view:

‘I cannot believe anyone now thinks of Bowles as a television actor of limited range,’ it stated. ‘Bowles is giving a performance that should establish him once and for all on the top table, alongside the deftest, wittiest and most complete actors we possess.’