Philanthropist Judith Neilson's newest cultural venture will relaunch after COVID-19 forced its shutdown 11 months ago after a single performance.

A collaboration between the Sydney Dance Company and choreographer Rafael Bonachela will kick off a series of digital performances commissioned for the $32 million performing arts venue, Phoenix Central Park, which opened last February in Chippendale only to abruptly close weeks later.

The short film captures the first moment the dancers were able to make physical contact again after months of adhering to a strict no-touch policy due to the pandemic.

The video was filmed and choreographed to respond to various spaces throughout the building, including the central performance space and the subterranean car park. 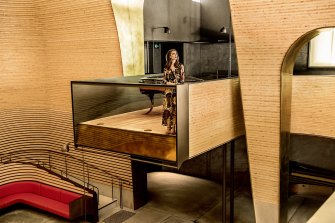 Creative director Beau Neilson, daughter of Judith, said unlike any other performance space in Sydney, the building's striking award-winning architectural spaces would be an important element in future creative collaboration.

The building's exterior defies symmetry, looking something like an awry Christmas Cracker hat. The gallery side of the building is dedicated to contemporary art and includes paintings as well as sculpture, installation and digital art. The bell-shaped ceiling of the central performance space is layered from individual strands of cross-laminated timbers. 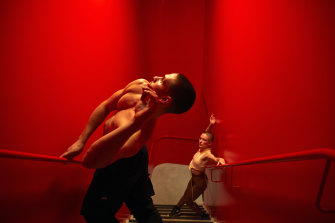 A collaboration between the Sydney Dance Company will kick off a series of digital performances commissioned for the $32 million performing arts venue.

The overall effect is akin to a description posted on Phoenix's Facebook page in December: a "cattle-prod to caution, a cathedral for chaos, a f— you to forgiveness".

"The aim has always been to nurture talent and expose them to new audiences, particularly Australian audiences – the space is very unusual, very special – and then by digital means share it with international audiences," Neilson said.

It was also established to bring the arts to more of Sydney – beyond Carriageworks in Eveleigh and performances spaces around the harbour, she said. Nearby, Judith Neilson's White Rabbit Gallery opened in 2009 to showcase a significant collection of Chinese contemporary art. 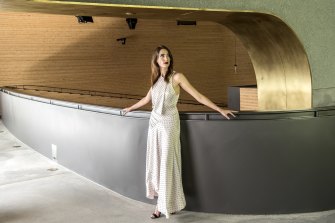 Creative director Beau Neilson said the space aimed to bring arts to Sydneysiders beyond Carriageworks and the harbour.Credit:Steven Siewert

In the 11 months the centre closed to the public, Phoenix invited more than 100 musicians and bands to document in house and impromptu performances that cut across the genres of jazz, experimental blues, and rockabilly. The auditorium was subsequently nicknamed The Nest, having served as a place of solace and shelter for artists when they needed it most, Neilson said.

The first film series, titled Space|Action, includes commissions from artists including Sydney Dance Company, Loose Fit and Party Dozen and will be released on Friday.

They will perform using three pianos in the space: a Fazzioli concert grand piano, an 1853 Sebastien Erard Grand piano, and a 1931 Poul Henningsen PH Piano.

"It's going to be fun and filmed in a quite unusual way," Neilson said.

Neilson said she had received many proposals from artists with ideas for the space. "I think there are going to be some really exciting talented performances," she said. "We have this idea of live musical performance while mentioning genre or a few keywords about the performance without releasing the name of the performer because we do like the idea of mystery."

Neilson said the space would not be available for commercial hire, with tickets only available to performances that form part of a curated program. Live performances will resume mid-year.

"Hopefully [audiences will] come out of this space better informed or inspired and put them on a different path."

COVID-19 lockdowns only proved, Neilson said, that "people need art, people need creativity, the public as well as the performer themselves, and that needs to be nurtured".

"There is no limit to how much art we can enjoy. If we think about children one of the first things that they do [is] draw, it's a big part of being human and sometimes we forget that as we get older."

Related posts:
January 14, 2021 Lifestyle Comments Off on Philanthropist Judith Neilson’s cutting-edge arts venue reopens
Celebrity News:
Luke Combs Earns 10th Consecutive No. 1 On Billboard’s Country Airplay Chart
'Riverdale' star Lili Reinhart reveals an imposter has been posing as her in interviews
Steve Harvey comments on stepdaughter’s romance with Michael B. Jordan: ‘I might approve of you’
Songs From Inauguration Special See Jump In Sales
Love Island's Dani Dyer welcomes first baby with boyfriend Sammy Kimmence
Recent Posts
This website uses cookies to improve your user experience and to provide you with advertisements that are relevant to your interests. By continuing to browse the site you are agreeing to our use of cookies.Ok