Liberal and Labor MPs want mandatory education for politicians on how to prevent and respond to sexual harassment and other serious incidents once an initial response to cleaning up parliamentary workplaces is introduced.

Prime Minister Scott Morrison personally briefed Coalition MPs on the recommendation from his department’s deputy secretary Stephanie Foster for an independent team to handle complaints of sexual harassment, assault or systemic bullying among MPs and their staff. 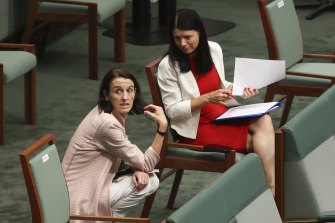 The briefing was seen by colleagues as a sign of how serious Mr Morrison is about addressing the problems.

The government is now wrapping up cross-party consultations about how to proceed, with cabinet to make the final call on when it will be done.

The review was set up as an initial response to former staffer Brittany Higgins making public allegations she was raped in a ministerial office in Parliament House in March 2019. Sex Discrimination Commissioner Kate Jenkins was subsequently asked to conduct a more thorough review of the culture in parliamentary workplaces, due in November.

Ms Foster said the immediate response should include “targeted, personalised, face to face training for all parliamentarians and staff”.

However, her report says politicians would be offered such education on a voluntary basis.

Ms Hammond said it should be considered akin to the compulsory professional development or workplace health and safety training required in many fields.

“I consider the recommendations in the Foster report regarding education and training for MPs and senators as critically important to ensuring cultural change and prevention,” she said.

“I am also of the view that they could be strengthened – and therefore have deterrent and accountability elements – if certain training or education was made mandatory at induction for new MPs and senators and thereafter reinforced with ongoing requirements for each member and senator throughout the life of each Parliament.”

Dr Martin, a psychologist before entering politics, said proper training about dealing with sexual harassment and bullying should be compulsory for all new MPs as part of their induction and followed up annually.

“Due to the manifest inadequacy of existing online training provided through the Department of Finance, the ALP has already initiated a program of training on the prevention of sexual harassment and workplace bullying,” they wrote in a letter to the senior bureaucrat, offering to share insights with prospective trainers ahead of a Parliament-wide program. 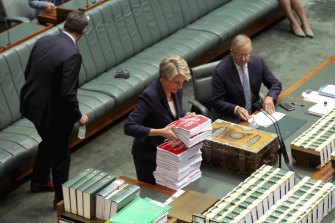 Despite disquiet over the need for mandatory training, the Foster recommendations were well-received by MPs on all sides of politics, eight of whom spoke with the Herald and The Age.

It is broadly seen as a good first step to cleaning up the culture of Parliament and one which Ms Jenkins will be able to build on with her investigation.

Ms Plibersek said it was vital things start to change as soon as possible.

“It’s really important that we have better procedures worked out than the way Brittany Higgins matter was dealt with,” she said.

“I’m not sure anything fundamentally would change if the same thing happened tomorrow.”

Related posts:
June 27, 2021 Lifestyle Comments Off on Politicians urge anti-harassment training for MPs become mandatory and ongoing
Celebrity News:
It Was Love at First Sight When Track Athletes Tara Davis and Hunter Woodhall Met at Age 16
Scooter Braun Officially Files For Divorce From Yael Cohen – & Already Has A Prenup In Place!
OMG! Prince William Is Also Writing a Book After Harry's Memoir News
Courteney Cox: My cooking is a lot better than the restaurants I used to go to
Are Shailene Woodley And Aaron Rodgers Planning Their Wedding?
Recent Posts