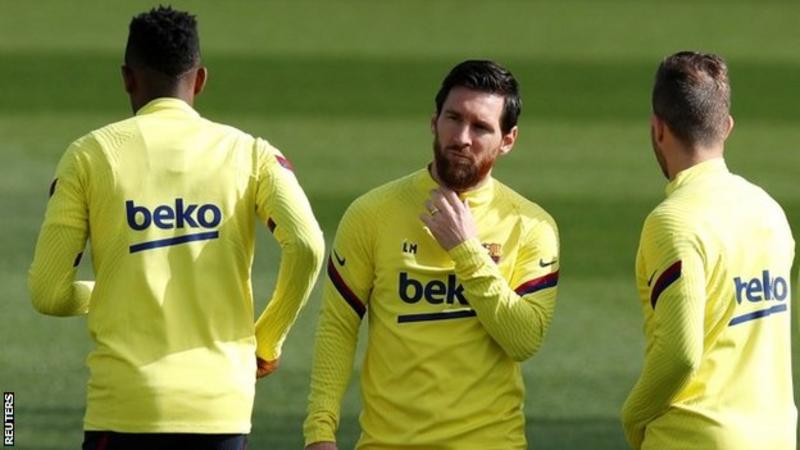 Barca are two points clear of Real at the top of La Liga going into one of world football’s great fixtures at the Bernabeu.

“For them it’s a key game, maybe not decisive, but more important than for us because if we win we’ll go five points clear,” said Setien.

Real manager Zinedine Zidane says his side are in a “delicate moment”.

Madrid’s 2-1 home defeat by Manchester City in the Champions League on Wednesday was their third consecutive game without a win in all competitions. Their last home win was a month ago, against city rivals Atletico Madrid.

Barcelona, who drew 1-1 at Napoli in the Champions League on Tuesday, are unbeaten in four games.

Zidane said: “What we need to ensure is our mood is positive. It’s by sticking together that we’re going to get out of this and not listening to what’s being said.

“What we need is for our fans to be with us from the first minute to the 90th. I can understand if they are frustrated or annoyed, but we need them.”

Zidane hopes his side can play as they did against City – except for the closing minutes when they conceded twice.

“Anything can happen in a game against such good opposition, but the important thing is how we react and we’ll have to play how we did for 78 minutes against Manchester City,” he said.

Barca are unbeaten in their last seven meetings with Madrid.

Former Real Betis manager Setien, who only replaced the sacked Ernesto Valverde in January, is preparing for his first Clasico.

“In these games the past is forgotten,” the 61-year-old said. “It’s a Clasico, both teams will always give their all regardless of the situation they’re in.

“I’m expecting a tightly contested game, very evenly matched. And it’s a question of who gets things right to win the game.”

Barcelona could hand a first start to striker Martin Braithwaite, who the Spanish champions were allowed to signed from Leganes in an emergency transfer. The 28-year-old Dane made his Barca debut as a substitute in a 5-0 win over Eibar last weekend.

The champions will be without the injured Luis Suarez, Ousmane Dembele and Sergi Roberto but left-back Jordi Alba has recovered from a thigh problem.

Eden Hazard may not play again this season for Real, but captain Sergio Ramos is able to play. His red card against City means he will miss their next Champions League match.