Shay Mitchell may be best-known for her roles on the hit TV series Pretty Little Liars and You — as well as her current Hulu hit Dollface — but it’s her latest role that has her facing doubt, wondering if she’s doing a good enough job and savoring even the smallest compliments, while also relishing the entire experience. Yep, we’re talking about her role as as new mom.

The model, actress, author and entrepreneur gave birth to her first daughter, Atlas Noa, in October 2019, and since then has experienced the joys, fears, fails and ridiculous mom-shaming that pretty much every mama does — which is why she was thrilled to join Pampers’ #ShareTheLove campaign along with fellow multi-hyphenate mom Chrissy Teigen. More than just a hashtag, #ShareTheLove is a movement rooted in the desire to inspire and support moms.

“It’s about sharing the love — and who could not love that?” Mitchell explained to SheKnows in an exclusive interview, when asked why the campaign appealed to her. “Truly, as a new mom myself, it really was important to hear positive compliments from people just being like, ‘hey, you’re doing a great job.’ Those went such a long way, especially on those late nights-slash-early mornings.

“And Pampers also discovered that nine out of 10 moms don’t feel like they’re doing a good enough job, and I could definitely relate to that. You know, I’ll have days where I’m like, ‘Oh, I’m failing you’ and then other days where I’m like, ‘OK. It was a good day.’ So it comes in ebbs and flows. But  sharing love can never be a bad thing — on any day, to anyone, especially moms.”

Mitchell opened up to SheKnows about making Atlas laugh, parenting missteps (note: she doesn’t like to call them “failures”) and how she’s not above stealing a baby name. Keep reading below…

Calling all moms! @pampersus & @pamperscanada found that 9 out of 10 of us worry we’re not doing a good enough job. I know I can relate. Tag 3 moms who need a reminder of how great they are! @kayrochic @ladyluofthewolves and @preciousm1954 you are amazing and inspire me everyday! ? P.S. You can create your own adorable affirmation sticker by searching “Pampers” under Gifs in your stories. I can’t wait to see what you make! #ShareTheLove #PampersPartner

SK: Is there a parenting moment that stands out for you when you were like, ‘You know what? I’m doing OK’?

SM: When I made her laugh for the first time. I was like, ‘Oh, wait, you don’t even notice that my hair hasn’t been washed in five days or I’m wearing the same shirt as I have the past week or haven’t brushed my teeth.’ They don’t care about any of that stuff. They just want love and attention and affection — and I can definitely do that. And I was like, ‘OK, I’m doing a good job. I made you laugh’ and it meant a lot.

SK: Who or what — besides your daughter — reminds you that you’re doing a good job?

SM: My friends, my partner, my mom, my dad — just the community that I have around me that have really helped me throughout this entire journey, but especially since having her. And like I said, I feel like just getting the, ‘Hey, you’re doing a good job’ or ‘We acknowledge you’ or ‘Thank you.’

SK: You’ve been open on social media about your parenting journey. You shared news of your miscarriage. Why it was important for you to go public with a topic that for many people still feels a little taboo?

SM: Right, and because of that, I didn’t want to not talk about it. It was too important to deal with by myself. I wanted to have that conversation. And by me coming out about it, I [found] out that a lot of people that I had known had actually gone through the same thing, and we had a conversation about it. So the more we can talk about it, the better. And definitely making it feel less taboo — there’s no need for that.

SK: Is there anything that you won’t share on social media about parenting?

SM: I think it’s a fine line, and it’s gonna be an interesting dance as she gets older with how much I share of her. You know, right now I’m just so excited. She’s a baby and she’s going to change. And who knows how I’ll feel in six months. But it’s definitely something that you have to ask yourself on a daily basis, or at least for us. We’re like, ‘Hey, is this OK?’ There are, of course, some personal moments that we don’t need to share with everybody, and that we’ll save just for us. But there’s also so many moments that I do want to put out there. 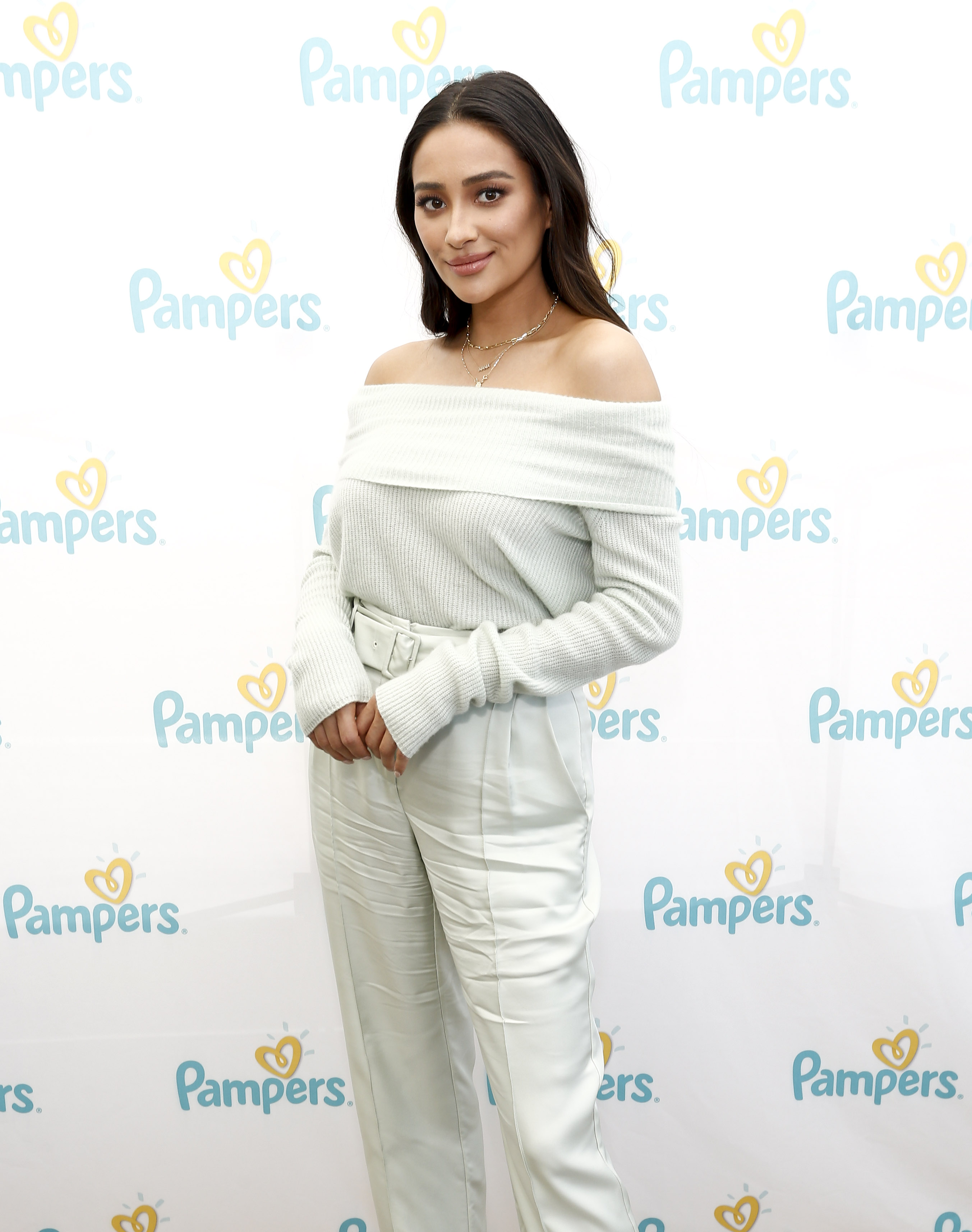 SK: What has surprised you most about motherhood? Is there anything you’ve found especially hard or amazing?

SM: I think the community that comes from it — but both the positive sides of social media and the negative sides, with all that comes also the mom-shaming stuff, too. But I’ve truly learned to tune that out because getting to come home to that little face is where I want to put my attention. And also that the friends and the community that I’ve built from having a child and entering this mom group has been really amazing.

SK: Can you share how you came up with her name?

SM: Good friends of ours had just recently had a daughter themselves. And so they were calling us like, ‘Hey, what you guys think about these names?’ They went through a list. And as soon as I heard her say Atlas I was like, ping! I looked at [partner Matte Babel]. He was like, ping! I’m like, this is perfect. And I’m like, ‘You should go with the other one! And then she ended up going with a different name, which is actually perfectly suited for her daughter, and we took the name Atlas.

And then Noa was something that I actually randomly saw on Twitter.

SM: Yeah! Somebody was like, we’re guessing what Shay’s baby’s name is gonna be. And I’m like, well, that wasn’t an idea before, but it is now. And I just took the H off, so N-O-A. Atlas Noa.

SK: Cool. Did you tell your friends who had thrown out Atlas as one of their options?

SM: Yes. I told them, they know it’s because of them. So they will always remind me that they gave us the name, which I’m totally OK with crediting them for.

SK: What if they had named their child Atlas? Would you still have?

SM: Probably, because I loved it so much and it just felt so right. I spoke to people who were like, don’t come up with any name. You have to meet them first. And I’m like, oh, no, I just kept her in me for nine months — I’m going to name her whatever I want.

SK: So you came up with that and were sure of it before you met her…

SM: Yes, yes. And, you know, looking at her now, I’m like she is definitely going to be a world traveler. Loves a plane.

Oh, the places we will go…

SK: You talked about mom shaming and being able to tune it out. Was that a learning experience for you?

SM: I had practice from before. You know, people come at me while I was pregnant. You shouldn’t eat this. You shouldn’t do that. Well, you don’t have to do it. That’s my answer. Thank you very much. I’m going to do what feels right. And that’s the messaging that I want to say to anybody: Do what feels right. This is your experience. Nobody else is living it. And that’s all that matters.

SK: Any advice for moms who maybe don’t have quite such thick skin from being in the public eye already?

SM: I’d say nobody is perfect. We’re all figuring it out. And show me one person who never messed up once. That would be impossible because there isn’t. And also, why would you want to be perfect? Isn’t it funny to share those stories about your little missteps? You know, I don’t want to call them failures because they’re not. They’re missteps. And I think it’s so funny. I love hearing stories about, ‘Well, your mom did this one time…’ I mean, those are great to look back on. I want a bunch of those. So bring it on.

SM: Not bringing enough outfits. I took her out for lunch one time; It was one of the first few times that I’d taken her out and I was so excited. We made it out of the house. I was having lunch with a girlfriend and [Atlas] had an accident. Changed her. And then she had another accident. No more clothes, no other clothes. So I wrapped my T-shirt around her and made it work. Luckily it was L.A., so nobody noticed my bra top. I was like, it’s a it’s a bikini!

SK: Any other advice that you would give to moms?