Despite Prime Minister Scott Morrison’s popular determination to tackle climate change with “technology not taxes”, the decision might not long remain in Australian hands if the G7 leaders’ statement from the weekend meeting in Cornwall is anything to go by.

Soon we might have to decide if we want to pay a carbon tax to our own government, or one to someone else’s. 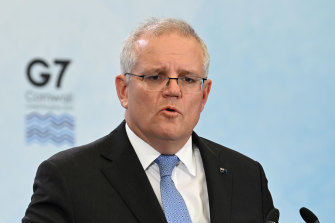 Naturally, the communique issued by the leaders of the world’s richest nations doesn’t mention anything as coarse as a tariff, let alone a carbon tax.

“We endorse the conclusions of G7 Trade Ministers on promoting the transition to sustainable supply chains,” reads the relevant passage, “and acknowledge the risk of carbon leakage, and will work collaboratively to address this risk and to align our trading practices with our commitments under the Paris Agreement.”

“Carbon leakage” is one of those terms that can cause eyes to glaze before its significance sinks in. To understand it, it helps to know a bit about how carbon prices work.

In the European Union, industries currently pay about $80 per tonne for permits to emit planet-warming carbon dioxide. The price is designed to act as an incentive to drive innovation in low-emission technologies and processes.

The incentive fails if producers in jurisdictions outside the EU that have no similar carbon price – places such as Australia – are allowed to undercut locals with carbon-heavy imports.

This is carbon leakage, and it is what the G7 leaders just agreed they would shape their trade practices to prevent.

Within the coming weeks the EU is set to reveal details of its planned ‘Carbon Border Adjustment Mechanism’ designed to make sure its local industry is not undercut by un-carbon constrained offshore competition.

In other words, a border tariff.

Chief executive of Australia’s Carbon Market Institute John Connor notes such a measure would not be “protectionism” as the Australian government has asserted, but levelling the playing field to ensure against outside “freeloaders”.

Pascal Lamy, former director general of the World Trade Organisation and former EU trade commissioner, and one of the architects of the tariff, recently told The Sydney Morning Herald and The Age that he is certain the European model was in keeping with WTO rules.

“It is a precautionist measure, not a protectionist one,” he said.

Connor believes that once the EU model is in place it will only spread. Even before the G7 made its weekend statement the United States, Japan and South Korea had made it clear they were considering similar measures.

China is in the process of developing a carbon price, and hardly appears likely to cut Australia any trade slack.

The Resolve Political Monitor, conducted for The Sydney Morning Herald and The Age by research company Resolve Strategic, shows 61 per cent of respondents prefer the use of new technologies, compared to just 13 per cent voicing a preference for putting a price on emissions via a mechanism such as a tax or trading system.

It might come as a surprise to these voters if Australian industry is suddenly clobbered with border taxes because it has no effective carbon tax.

But it won’t come as any surprise to anyone who has been watching the growing global consensus that carbon must be priced.

Most Viewed in Environment

Related posts:
June 16, 2021 Lifestyle Comments Off on Should we pay a carbon tax to our own government or to someone else’s?
Celebrity News:
What Is Offset's Real Name?
How Did Courteney Cox Meet Boyfriend Johnny McDaid? What Is Their Age Difference?
It Was Love at First Sight When Track Athletes Tara Davis and Hunter Woodhall Met at Age 16
Scooter Braun Officially Files For Divorce From Yael Cohen – & Already Has A Prenup In Place!
OMG! Prince William Is Also Writing a Book After Harry's Memoir News
Recent Posts