Stop this trashing of monuments – and of our past: The Tories seem afraid of condemning it… but Churchill’s biographer ANDREW ROBERTS says most Britons are shocked and repulsed by the Left’s assault on the statues 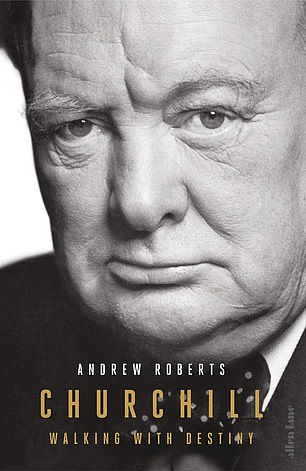 The Cenotaph, Britain’s memorial in Whitehall to her dead of the two world wars, has been boarded up to protect it from desecration during the demonstrations this weekend. The statues of Winston Churchill, Sir Robert Peel, Henry Dundas, Earl Haig and others have been defaced.

A mob threw a statue into Bristol Harbour. William Gladstone has been expunged from Liverpool University. Captain Cook, Sir Francis Drake, Clive of India: all and many more are under threat. The Mayor of London – never one to miss a chance to grandstand – is setting up a commission to remove more memorials, as are 130 Labour-led councils.

Robert Baden-Powell, the hero of the Siege of Mafeking and founder of the Scouting movement, is under threat in Poole. Maps of the statues of other imperial heroes are being published on Leftist websites to encourage attacks, and the museum curator Madeline Odent – yes, a museum curator – has posted advice on the best acids for destroying bronze statues. 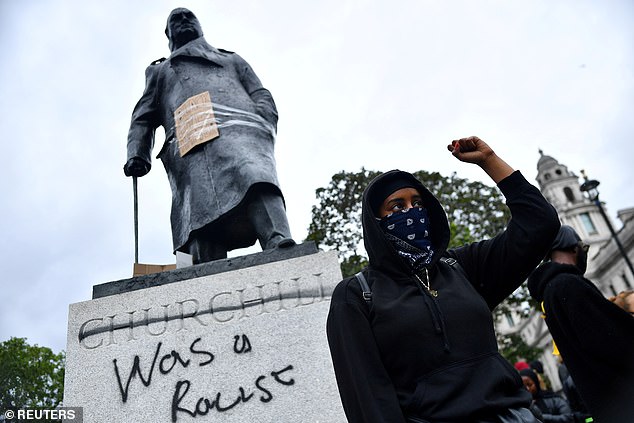 The statues of Winston Churchill (pictured), Sir Robert Peel, Henry Dundas, Earl Haig and others have been defaced. 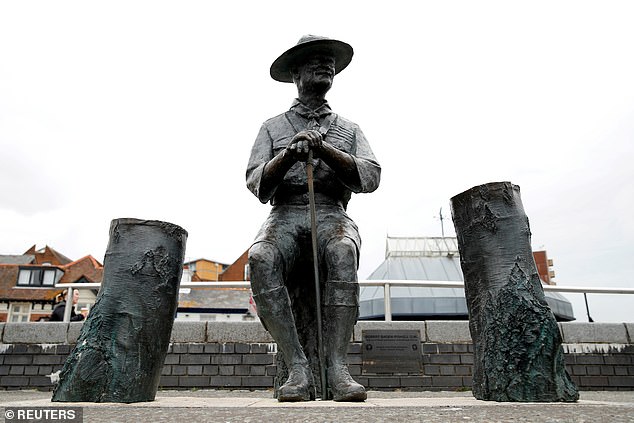 Robert Baden-Powell (pictured), the hero of the Siege of Mafeking and founder of the Scouting movement, is under threat in Poole

The culture war that many of us have been predicting ever since our imperial past started to be routinely trashed in our schools has now begun in earnest. (One of the ringleaders of the Bristol mob was a teacher, unsurprisingly.)

For decades now, the Left-dominated educational establishment have been intent on trying to make us ashamed of the British Empire, and to despise our forefathers for building and defending it.

People who think this latest campaign is primarily about either statues or the slave trade, and will therefore end once slavers’ statues are removed, are deluding themselves.

King George III signed the legislation into law that abolished the slave trade more than two centuries ago in 1807, yet there have still been calls to remove his bust from a churchyard in Lincoln.

Cecil Rhodes – contrary to what one ignoramus on a Radio 4 vox pop recently asserted – never bought or sold a slave in his life, yet we have been given orders that he ‘must fall’. This is thus not principally about slavery – it is about a much wider issue than that.

Of course black lives matter greatly, but so does our national identity, and they do not need to be in conflict. Nobody alive today knows anyone who knew anyone who knew anyone who was a slave of the British Empire, so this ought to be a discussion that can be conducted with rationality and evidence, not by anarchy and mob rule. The discussion about Churchill’s attitude to the native peoples of the British Empire, for example, is a nuanced one that cannot be summed up by three words spray-painted on his statue.

He undoubtedly made remarks and the occasional joke about non-white people that today we would find completely unacceptable, although it is worth pointing out that he also made equally or more disparaging remarks about Europeans too. Unlike Karl Marx, Churchill never used the N-word, which dyed-in-the-wool racists tended to in those days.

When Churchill was at school, Charles Darwin was still alive, and people believed that a hierarchy of races was scientific fact, however obscene and ludicrous we know that to be today. Yet throughout his life, Churchill fought to protect the non-white peoples of the Empire, and was proud of the way that Indians’ life expectancy doubled and their population massively increased under British rule.

He considered it his lifelong duty to try to improve the lives of the Empire’s native peoples. Black lives mattered to Winston Churchill. For Dr Shola Mos-Shogbamimu to denounce ‘the way he used his privilege, power and influence to cause untold misery and atrocities on non-white nations’ betrays an utter lack of understanding of the altruism that underpinned much of the imperial story. 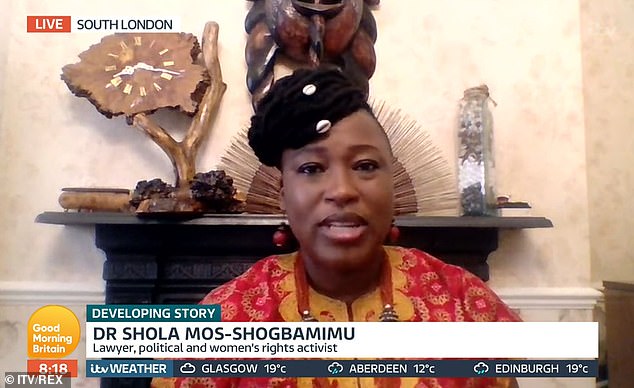 For Dr Shola Mos-Shogbamimu (pictured) to denounce ‘the way he used his privilege, power and influence to cause untold misery and atrocities on non-white nations’ betrays an utter lack of understanding of the altruism that underpinned much of the imperial story

To wrench historical figures out of their historical contexts and expect them to hold modern views on issues such as race is anyhow absurd. People’s reputations are being trashed for holding opinions that a large majority of people held at the time – essentially for being insufficiently woke. Even Mahatma Gandhi held what to us today are extremely offensive views about black Africans.

How to reconcile all this? By using our common sense. ‘The past is a foreign country,’ writes L. P. Hartley in The Go-Between. ‘They do things differently there.’ If we allow our statues and memorials and place names to be torn down because of our present-day views – and because some people claim to be offended by parts of our built environment that have been around for decades and sometimes centuries – it speaks to a pathetic lack of confidence in ourselves as a nation.

We are on the way to a society of competing victimhoods, atomised and balkanised into ever smaller communities, which, ironically enough, is something that racists want, too. The inescapable truth is that throughout history, nations have aspired to build empires, and that is not just true of white Europeans. The Hittites, Mongols, Aztecs, Zulus, Ottomans, and so many more throughout history – all built great empires and were not white Europeans. Many lasted much longer than the British Empire, although none was larger. Yet where is the Zulu who is ashamed of Shaka? The Mongolian who bemoans Genghis? The Uzbek who apologises for Tamerlane? The virus of self-hatred seems to be almost solely reserved for the English-speaking peoples. Where are the Italians who feel no pride in the Roman Empire?

Very often the facts used to justify tearing down statues are faulty, and the reasoning against natural justice. William Gladstone did not own or trade slaves, even if his father did. The activist Afua Hirsch wants Nelson taken down from Trafalgar Square because, although he didn’t buy or sell slaves either, he supported the trade when it was perfectly legal to do so. 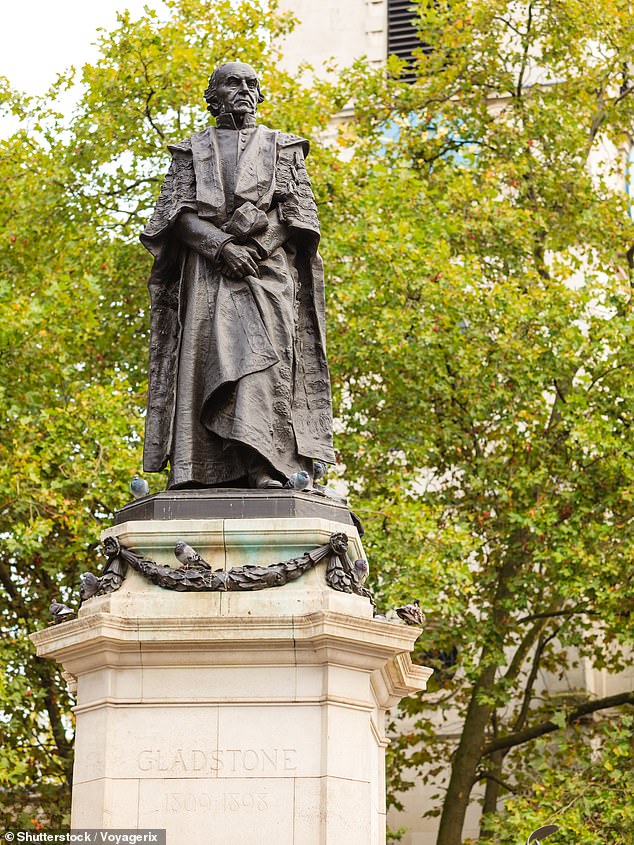 William Gladstone (Aldwych statue pictured)  did not own or trade slaves, even if his father did. The activist Afua Hirsch wants Nelson taken down from Trafalgar Square because, although he didn’t buy or sell slaves either, he supported the trade when it was perfectly legal to do so

Even though it was an unimportant part of his life – Nelson was put on the column because he saved the nation at Trafalgar – his memorialising has to be seen solely through the prism of race.

For the British Left, the Chinese Cultural Revolution is not so much a warning as a template. The Left cannot believe its luck that Tories seem so unwilling to denounce this lunacy, and to fight back. So we must put up with the destruction, driven in large part by ignorant, angry, woke under-30s who hate Britain’s past because they were never taught it objectively, snowflakes who can’t stand the fact that they live in a country full of history, some of it bad, most of it glorious.

Not to mention the Left’s mirror image on the extreme Right, who also hate Churchill because he defeated their fascist ideology.

Nobody in modern British society is valued or respected any the less because of a statue that was put up 100 years ago. We do not have to agree with everything done by those who came before us, but we should try to understand them, just as we hope that those who come after will try to understand us.

Fortunately, most British people are shocked and repulsed by this assault on the nation’s statues. Only 13 per cent supported the destruction in Bristol. So bring on the culture war. Even with the Left-wing media, academia, teaching unions and yobs with spray-paint against them, the British people will win, so long as the debate is conducted in a rational way rather than by the mob rule seen in recent days. We demand an end to this trashing of our monuments and of our past.

Andrew Roberts’s Churchill: Walking With Destiny is published by Penguin.

Related posts:
June 13, 2020 Lifestyle Comments Off on Stop this trashing of monuments
Celebrity News:
Caitlyn Jenner Claims Her Kids Were ‘Scared’ For Her When She Revealed Her Bid For California Governor
The young mum-to-be treated like a criminal for having a dying foetus
Ivanka Trump Hits Her Son, 5, In The Face With A Surfboard During Private Mother’s Day Lesson — Pics
Michael B. Jordan Reveals His Plan For Having Kids Amid Lori Harvey Romance — Watch
'Prodigal Son' Canceled at Fox After Two Seasons
Recent Posts