Sun Yang's relationship with swimming's governing body FINA could once again come under scrutiny if the Chinese star applies for clemency next year after being hit with an eight-year ban for tampering with a doping sample.

As the dust continues to settle on last week's ruling from the Court of Arbitration for Sport, Sun and his legal team maintain they will explore every option as they try to save the career of the triple-Olympic champion freestyler. 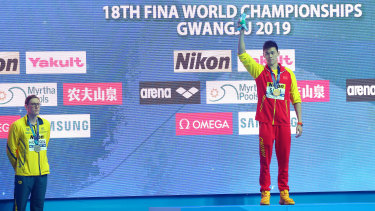 Mack Horton refused to stand on a podium with Sun Yang at the world championships.Credit:Getty

That will begin with an appeal to the Swiss Federal Tribunal, although few legal experts give Sun much hope of getting any relief from the enormous ban, which was imposed given it was Sun's second anti-doping violation after a 2014 suspension for a banned stimulant.

But the controversial 28-year-old may have some glimmer of hope in the new year, which would see an updated version of the World Anti-Doping Authority (WADA) code come into effect. CAS was unable to factor in any changes in its decision on the WADA appeal to a FINA doping panel decision, which warned Sun for his role in a blood sample being smashed but let him continue to compete.

In its full ruling, CAS notes that it understood the harshness of its decision and pointed Sun to the 2021 WADA Code, which would allow him to apply to FINA for a reduction in his penalty, although it would have to be significant if he was ever to compete again.

"The Panel notes that the new edition of the WADA Code, which enters into force on 1 January 2021, provides for additional exceptions to potentially reduce the period of ineligibility for violations of Article 2.5 WADA Code below four years, as well as for second anti-doping rule violations," CAS wrote.

"The 2021 edition of the WADA Code is, however, not applicable to the present proceedings, so the Panel is barred from applying such exceptions."

FINA's dynamic with Sun has already been under immense scrutiny since the saga was first made public last January. Well before that, the organisation's top brass had made little secret of their fondness for the Chinese star, who has been a sporting idol in his home nation and a moneyspinner for the sport.

It was an independent panel within FINA that made the initial ruling on Sun but for many swimmers and increasingly frustrated federations, that detail has mattered little given the poor optics of allowing Sun to swim at a dramatic World Championships, where he became the subject of two podium protests.

FINA now must decide whether it will reallocate medals from that meet, as CAS did not stipulate that as part of their findings. FINA will wait for Sun's appeal through the Swiss courts to reach a conclusion before any decision.

But should they show leniency to Sun when the WADA Code updates on January 1, the body would subject itself to a new wave of anger from swimmers already deeply frustrated with the custodians of the sport.

The full transcript of the CAS decision also suggested Sun did himself little favours in front of the panel by showing no remorse for his actions, or a reluctance to admit he could have handled the matter with more sense.

"It was striking that, in the course of his testimony, at no point did the Athlete express any regret as to his actions, or indicate that, with the benefit of hindsight, it might have been preferable for him to have acted differently.

"Rather, as the proceedings unfolded, he dug his heels in and, eventually, sought to blame others for the manifest failings that occurred."