Ian Stenlake doesn’t believe tearjerker should be a dirty word. The veteran musical theatre star and former Sea Patrol actor is performing in the Australian premiere of The Bridges of Madison County (until April 5). The Jason Robert Brown musical is based on the blockbuster romantic novel from Robert James Waller that was also made famous on the big screen with Clint Eastwood and Meryl Streep as the middle-aged pair who become involved in a short but passionate relationship.

“It is a tearjerker,” says Stenlake. “Watching it unfold in front of you, we’ve had so many tears just trying to get through to the end of this show. There’s an innate beauty in writing about such a powerful love.” 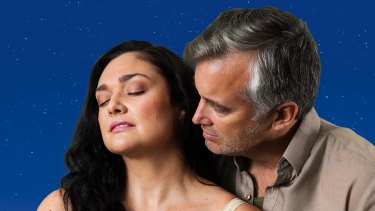 The actor stars as romantic lead Robert Kincaid, a role he eagerly took up after Martin Crewes stepped down due to scheduling issues. For the uninitiated, The Bridges of Madison County follows an Italian housewife on a farm in the American Midwest, played by Kate Maree Hoolihan. She becomes embroiled in an affair when a travelling photographer unexpectedly stops by her home and she must decide whether to continue the relationship.

While many love stories focus on the passions of youth, The Bridges of Madison County unashamedly examines the moral grey areas of middle-aged ardour. “I think that is refreshing,” says Stenlake.

“It’s not about young love, it’s about a guy in his 50s who has a lot of world experience. There’s sort of no villains in this and you can understand everybody, it’s up to the audience to decide what they think [about the affair]. These two people just respond to a very powerful love which does stay with them for the rest of their lives.”