The architects of the $10 billion cyclone reinsurance pool in northern Australia say the federal government must adopt a publicly funded national insurance scheme in order for premiums to remain affordable, as natural disasters become more frequent and intense due to climate change.

Unless this is done, increasing numbers of floods, bushfires and cyclones could render premiums unaffordable for many Australians, creating a risk of market failure, they say. 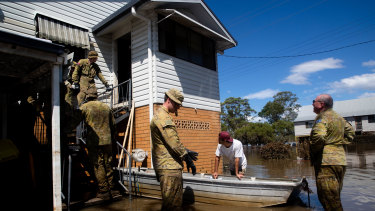 A national insurance scheme is needed to lower household premiums so they are affordable for average Australians, experts say.Credit:Janie Barrett

The Natural Disaster Insurance Review was commissioned following Brisbane’s devastating 2011 floods. It led a decade later to the establishment of a $10 billion taxpayer-backed underwriting scheme in northern Australia.

“Underwriting is a potential risk to government, but the government pays out every time this stuff happens anyway and that means the taxpayer pays out,” said Mr Berrill, an insurance lawyer.

“When the opponents of climate change say it’s going to cost a large amount of dough if we get rid of coal-fired power stations, I say, well, the cost of doing nothing is more.”

The seminal report, commissioned by the former assistant treasurer Bill Shorten, recommended broad reforms that were not all implemented but created a common definition of flooding to avoid acrimony between insurance companies and policy-holders over disputed claims.

In theory, publicly funded reinsurance can charge lower fees than a private company; the government said the scheme would be cost neutral to the taxpayer. A Senate committee has been established to determine if the scheme lives up to expectations.

Mr Berrill said the northern Australia scheme was a “small step, and it’s very limited but it needs to be expanded as we’re at a tipping point of market failure here”.

Speaking to the media in Lismore on Wednesday, Prime Minister Scott Morrison said it was “just an obvious fact” that people were suffering under the weight of escalating extreme weather events.

“Australia’s becoming a harder country to live in because of these natural disasters,” Mr Morrison said.

Mr Trowbridge, an actuary and consultant, suggested several options for a national insurance scheme, including a potential expansion of the northern Australia scheme.

Under one possible model, all insurance policy-holders could be forced to a pay a premium for natural disasters, which would spread the cost of natural disasters across the country and make coverage cheaper for those in high-risk flood, fire or cyclone locations. However, it would be politically tricky territory for governments to ask people to subsidise costs for people who had chosen to live in higher-risk locations.

Another possible solution would be to ask all policy-holders to contribute to a pool for natural disaster payouts, with a sliding-scale for costs based on the risks of where people lived, Mr Trowbridge said.

Alternatively, policyholders could pay a direct premium to set up a flood reinsurance pool like the one operating in the UK at a cost of £10 ($18) a head.

Mark Howden, a professor at Australian National University and a vice-chair of the Intergovernmental Panel on Climate Change, said there had been studies that demonstrated the links between climate change and previous natural disasters, but it was too early for work to begin on the floods which have devastated parts of Brisbane, south-east Queensland, northern NSW and parts of Sydney.

“Warmer waters generate energy and enable more evaporation from the ocean and the land. The higher atmospheric temperatures allow more moisture to be held in the atmosphere and more water to come down in rain events,” he said.

Australia’s average temperature has increased 1.4 degrees and the floods suggest we are seeing the results of the atmosphere’s capacity to hold about 10 per cent more water.

The federal government was criticised by NSW flood victims in Byron, Ballina and Tweed local government areas who were initially unable to access extra disaster payments that were offered to residents in Lismore, Richmond and Clarence Valley.

Mr Morrison said on Thursday the government would review the initial funding recommendation, made by the National Recovery and Resilience Agency, and Emergency Management Australia and potentially extend support to more people.

Greens leader Adam Bandt said he would ask Parliament, when it resumed in March, to extend the northern Australia insurance scheme to all flood victims.

Politicians from both sides of politics have urged the federal government to consider expanding the cyclone reinsurance scheme. Queensland Liberal MP Warren Entsch — an advocate for the scheme’s introduction — told Guardian Australia he had already made the case internally for the scheme to be expanded and to cover fire and floods, while Janelle Saffin, the Labor state MP for the NSW seat of Lismore, backed the proposal.