Hulu has a new must-watch series debuting April 15. FX’s Mrs. America follows the surprising story of conservative activist Phyllis Schlafly leading the backlash against the Equal Rights Amendment and Women’s Liberation movement. It’s a rare peek into the 1970s culture wars through the eyes of second-wave feminists Gloria Steinem, Betty Friedan, Shirley Chisholm, Bella Abzug, and Jill Rucklshaus. Mrs. America shares the story through all angles and perspectives for a balanced portrayal of the pivotal events and women.

A star-studded cast of leading ladies is bringing this powerful story, written by Mad Men‘s Davhi Waller, to Hulu. “What really struck me about all the women from this period was how messy they were,” Waller said on a panel for the show at the TV Critics Association Press Tour. “They’re complex, their contradictory nature. They quarrel and there’s joy, there’s love and there’s hate, and I wanted to have all the characters contain multitudes, so that was very intentional.”

From Uzo Aduba to Cate Blanchett, each one is truly the definition of #WHStrong. Get to know the cast and their real-life counterparts. 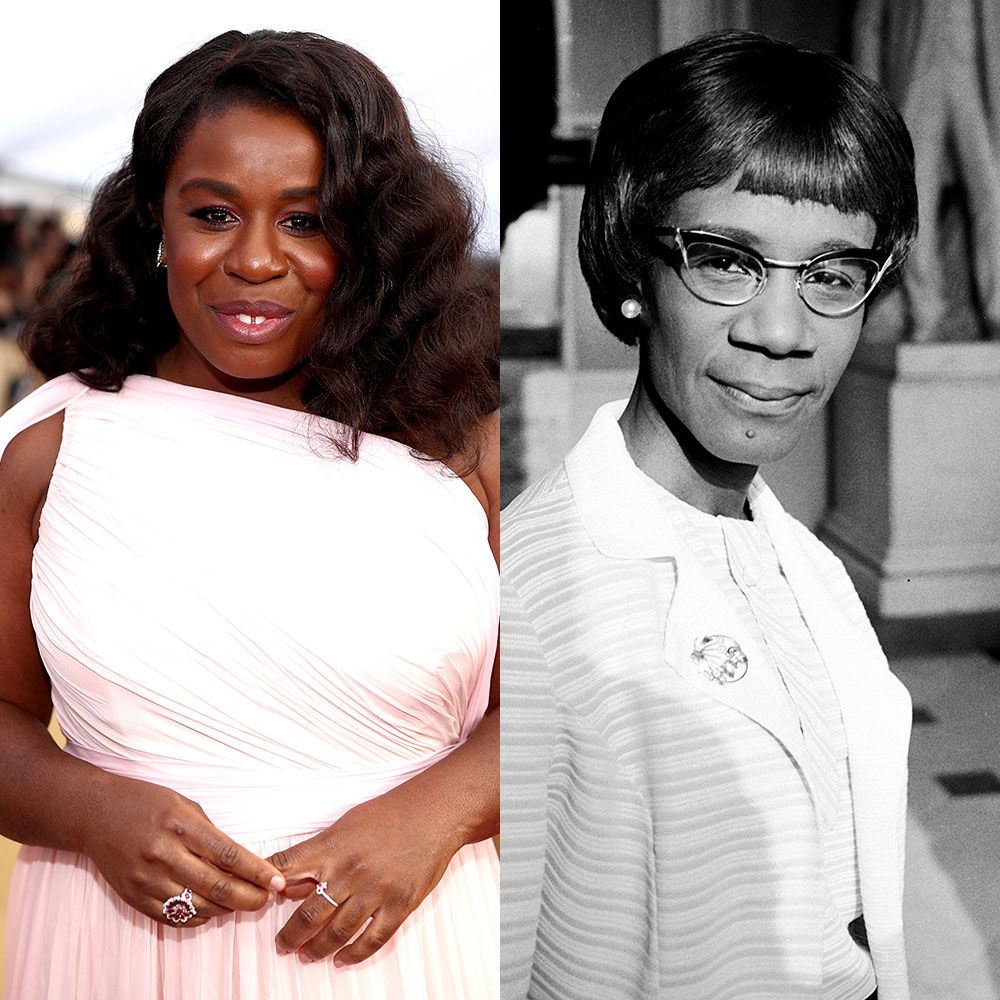 Uzo made a name for herself as Suzanne “Crazy Eyes” Warren in Orange is the New Black. But she started performing long before the prison drama made waves on Netflix. Uzo got her start in theater. She made her broadway debut in 2007 and has appeared in multiple plays, per IMDB. Now, she’s back with another memorable character.

Shirley Chisholm was a politician and became the first African American elected to Congress in 1968, per the National Women’s History Museum. She represented New York’s 12th congressional district from 1969 to 1983 and served seven terms. Shirley had big dreams, and she was the first woman and African American to seek a nomination for president of the United States from one of the two major political parties in 1972. 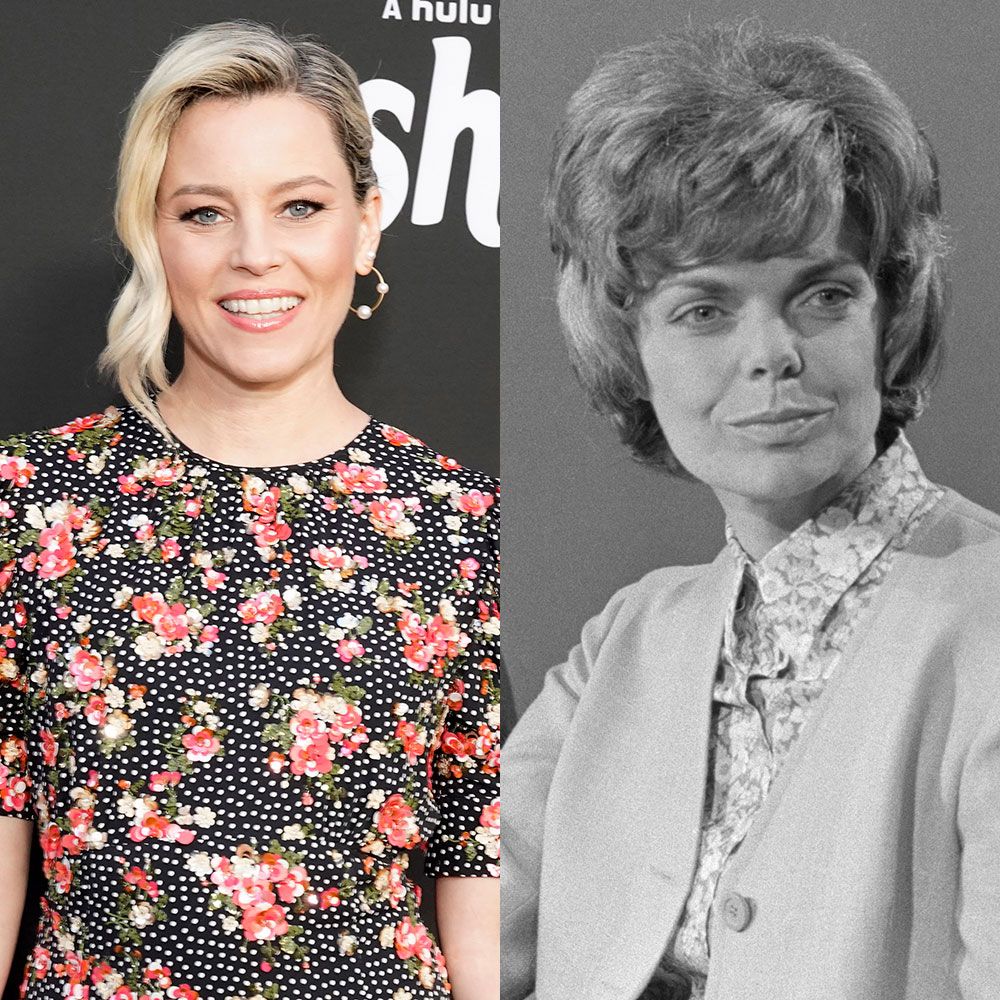 Jill Ruckelshaus was an adviser on women’s rights to President Nixon. Her husband, William Ruckelshaus, was the first head of the Environmental Protection Agency and resisted covering up the Watergate scandal. Later, Jill was a member of the U.S. Civil Rights Commission and the National Women’s Political Caucus. She resigned her White House advisor role after her husband William’s resignation during the “Saturday Night Massacre,” per the Seattle Times. 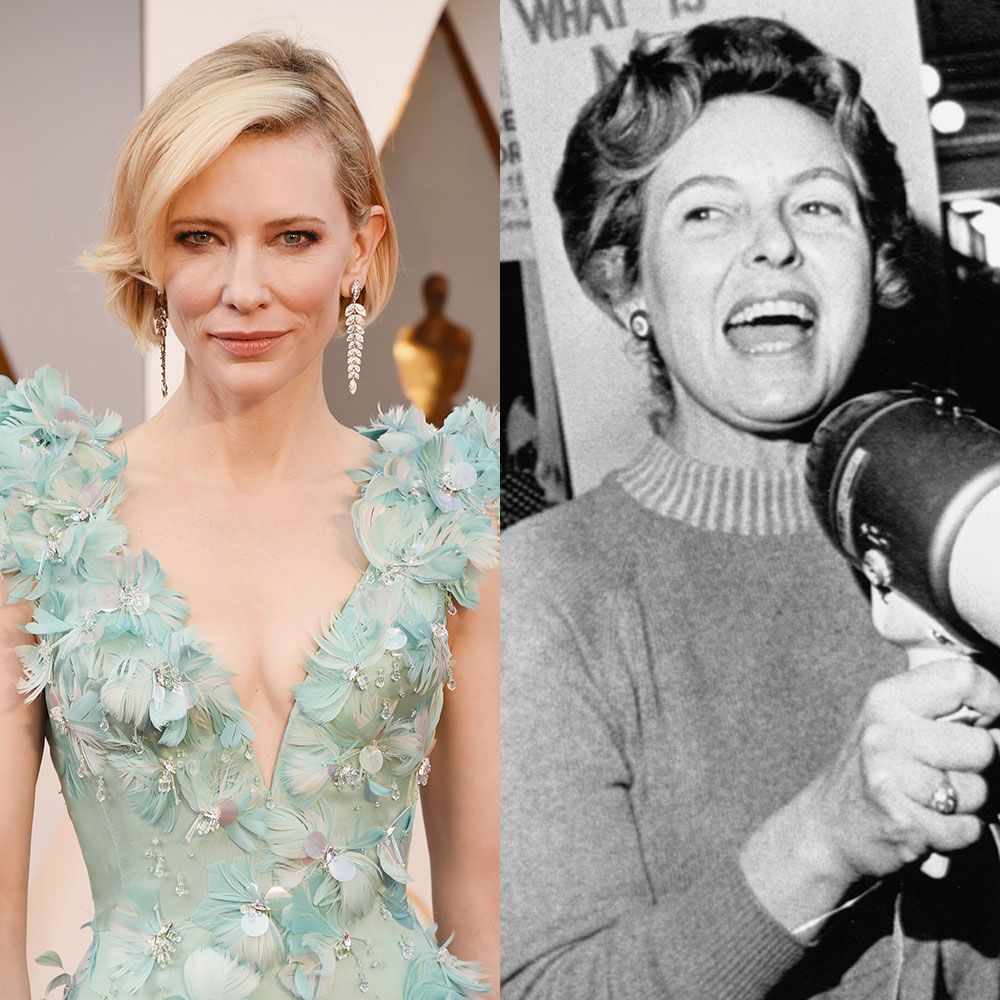 Cate is a Hollywood mainstay, but she was originally born in Melbourne, Australia. Throughout her career she’s starred in truly iconic movies, giving equally spectacular performances in blockbusters and art house films. Cate had roles in The Lord of the Rings series, Ocean’s Eight, Blue Jasmine, Elizabeth, and many more. She has two Oscars and shelves of other awards to her credit, per IMDB. Cate and her husband are artistic directors of the Sydney Theatre Company, and spend much of their time in Australia raising their three children.

Phyllis got a lot of attention in the 1970s leading the conservative backlash against Women’s Lib. Consider her the polar opposite of women’s rights activist Gloria Steinem. She also campaigned against safe-sex classes in school, the gay rights movement, and anti-harassment measures, per Time. Phyllis was married to a rich lawyer and lived in Illinois with her husband and six kids.

If any actress can give Phyllis heart, it’s Cate. “I don’t believe in demonizing anybody, and my agreement or disagreement or my political personal political persuasions, I couldn’t be less interested in folding into a character,” Cate told E News. “The way you create in ambiguity and juxtaposition and character is to simply borrow two very contradictory thoughts or actions, button them together, and then present them to an audience. And we’re all full of contradictions and hypocrisies, and nobody’s perfect, including Phyllis, although her hair was mostly always perfect.” 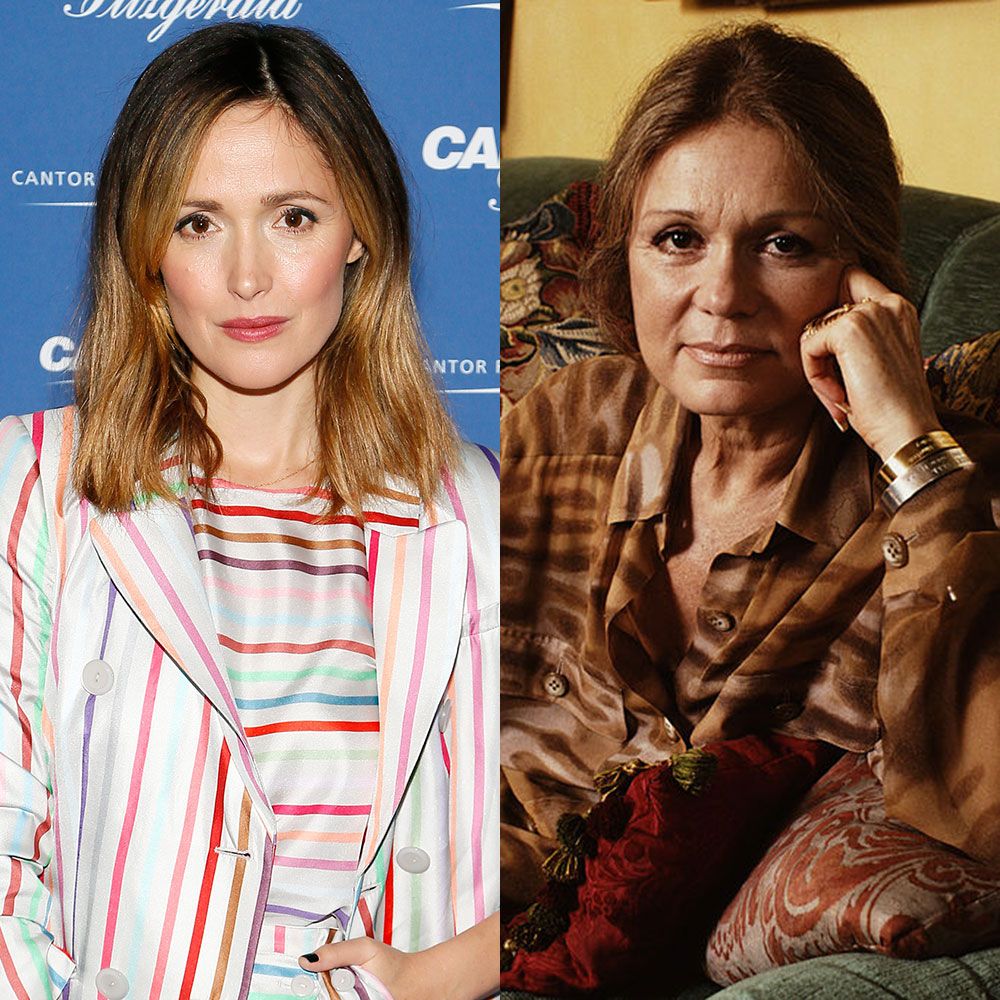 Rose is another Aussie actress who made a splash in Hollywood. She scored her first movie role at age 15 and has appeared in many films and TV shows since then, per IMDB. She’s best known for her comedic timing in hilarious hits like Bridesmaids and Neighbors, but Rose has a serious side as well in Troy and Wicker Park.

Gloria Steinem may be her biggest role yet. Gloria is a famed feminist as well as journalist and social/political activist. She was a spokeswoman for Women’s Lib and the feminist movement in the late 1960s and early 1970s. She was also a founder and columnist for New York magazine and founded Ms. magazine, per gloriasteinem.com.

Gloria has received multiple awards for her work. In 2013, Barack Obama awarded her the Presidential Medal of Freedom. In 2019, she received the Freedom Award from the National Civil Rights Museum. 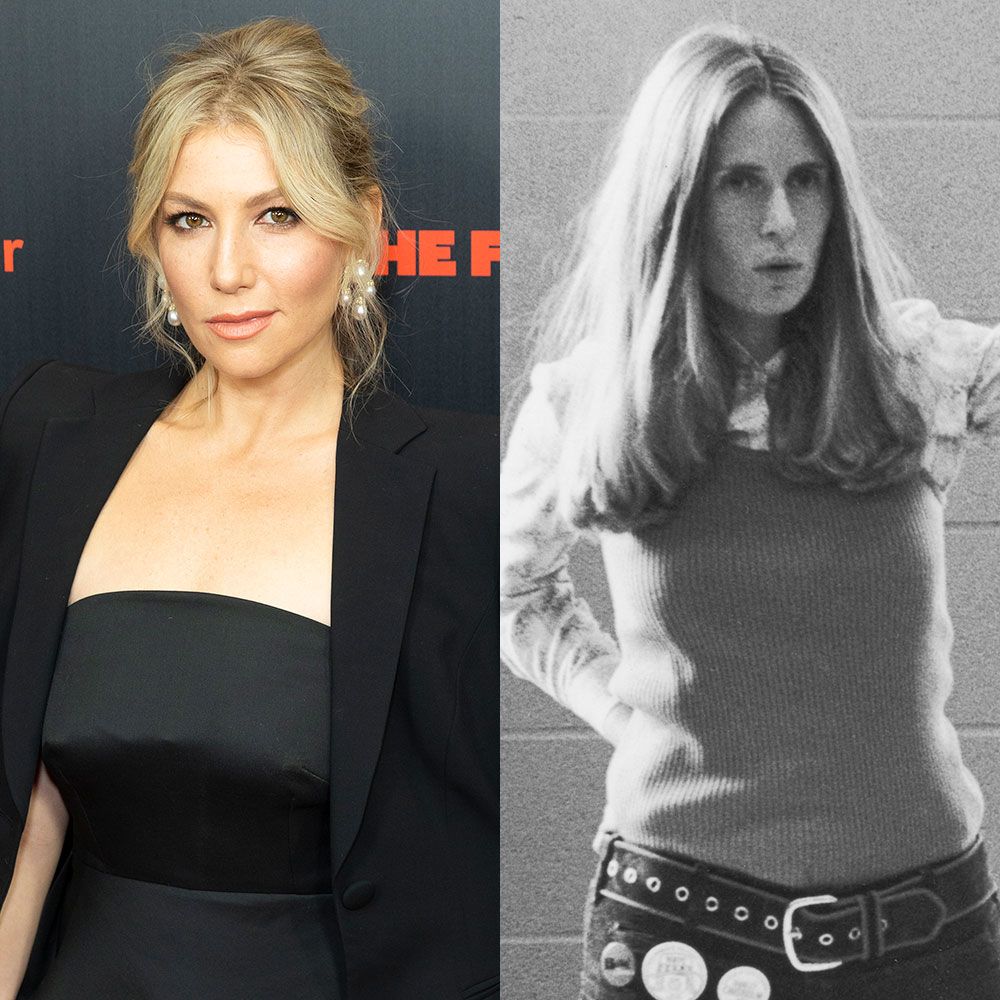 Ari is a Boston-born actress and producer. You may recognize her from Nick and Norah’s Infinite Playlist, Whip It, and What’s Your Number? If those don’t ring a bell, her turn as Brenda Feigen-Fasteau will certainly be memorable.

Brenda Feigen-Fasteau is a graduate of Harvard Law and practicing attorney. She cofounded the Women’s Action Alliance and Ms. magazine with Gloria, helped establish the National Women’s Political Caucus, and worked with Ruth Bader Ginsburg on the Women’s Rights Project, per People. 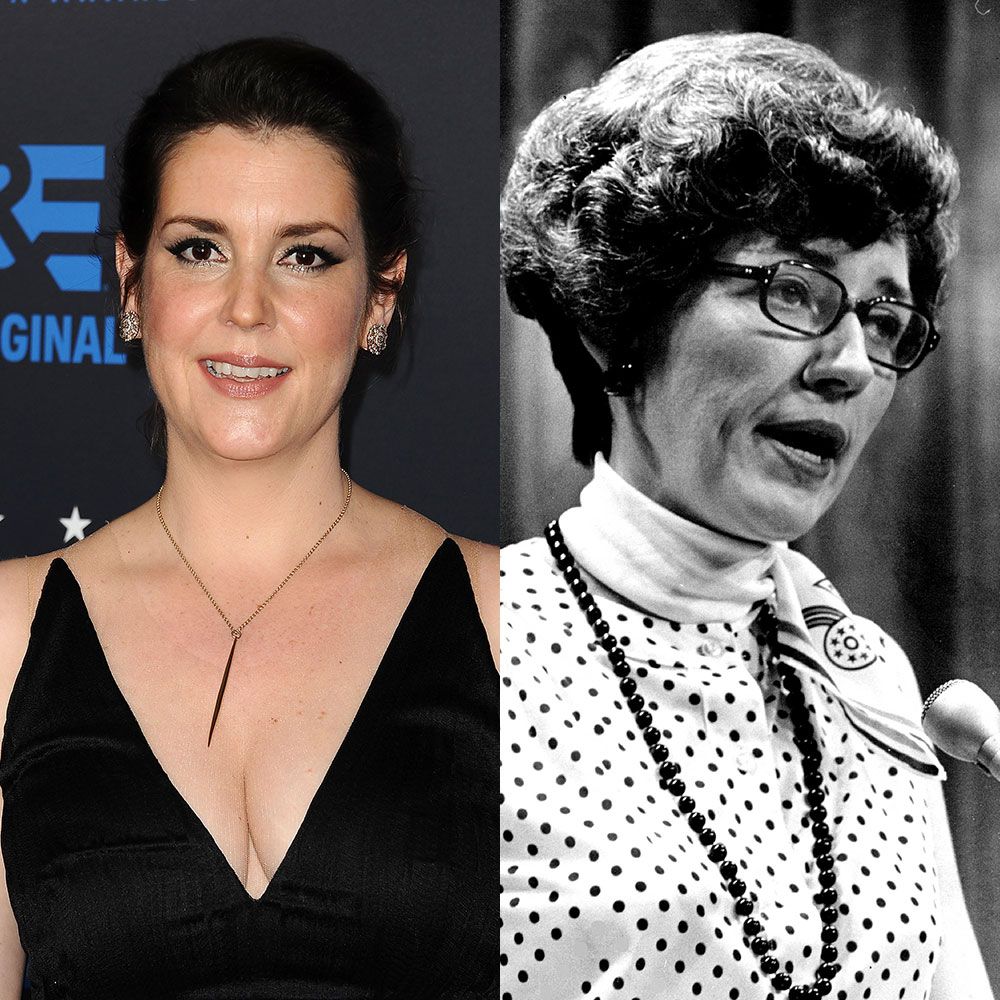 You may not know her by name, but you’ll certainly recognize Melanie’s face. She played Rose in Two and a Half Men and has appeared in a number of major movies during her career.

Rosemary Thomson was another conservative voice alongside Phyllis. She was Illinois director of Phyllis’s Eagle Forum, per Dallas News. She sent a letter to President Jimmy Carter with stern warnings for “refusing to name any [commission members] from Eagle Forum—’the alternative to women’s lib'” which “represents the traditional Judeo-Christian women’s viewpoint, a position you claim to espouse as a ‘born-again’ Christian.” She added that women from evangelical churches would be outraged at his “elevating homosexuals, lesbians, and women who reject Biblical principles to a prestigious national position on the IWY.” 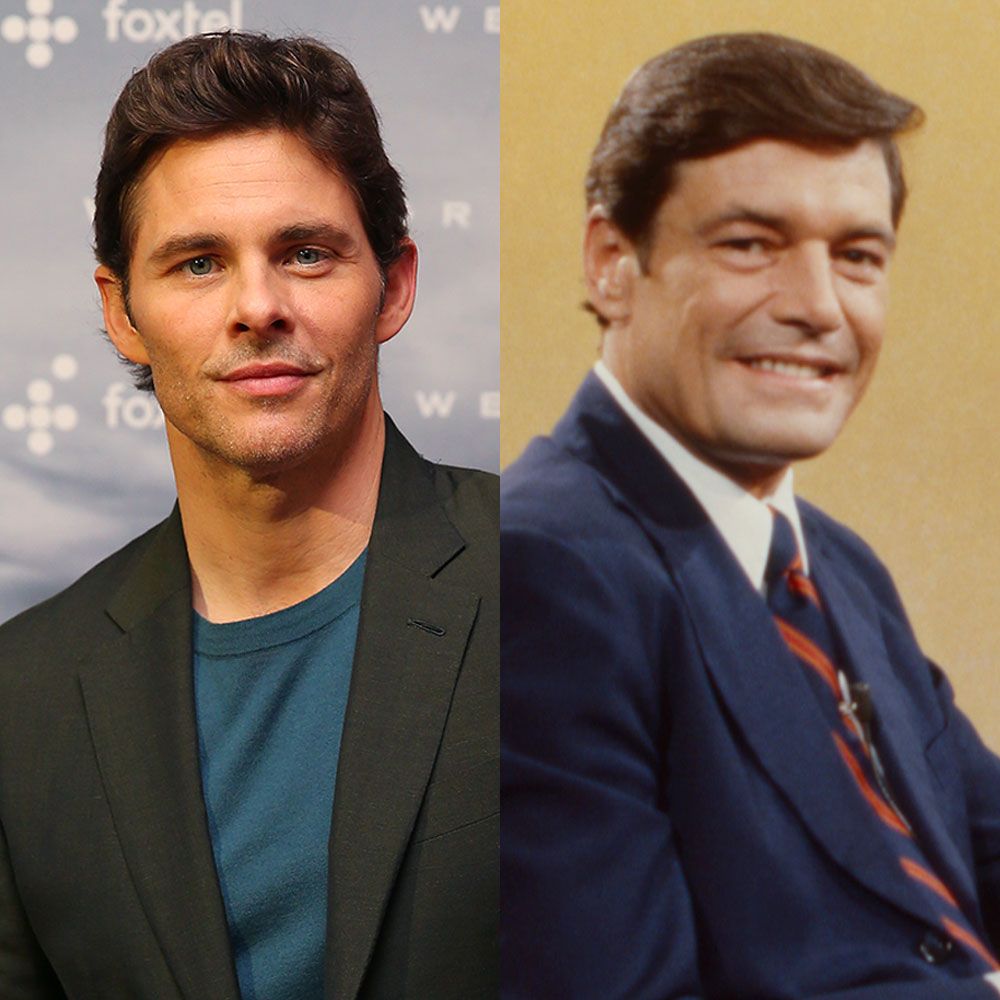 One of the few men in the ensemble cast is James Marsden. He made his co-stars, and everyone watching, swoon in Enchanted, 27 Dresses, and Hairspray. Since then, he’s also appeared on TV in Dead to Me, Westworld, and more. Not everyone will fall for his bright blue eyes in his latest role in Mrs. America, though.

Phil Crane was a history professor and former Representative of Illinois. He died of lung cancer in 2014, per NY Times. He fought for conservative causes during his 35 years serving in the House. Crane also made a failed run for president in 1980. He was best known as leader of the American Conservative Union. 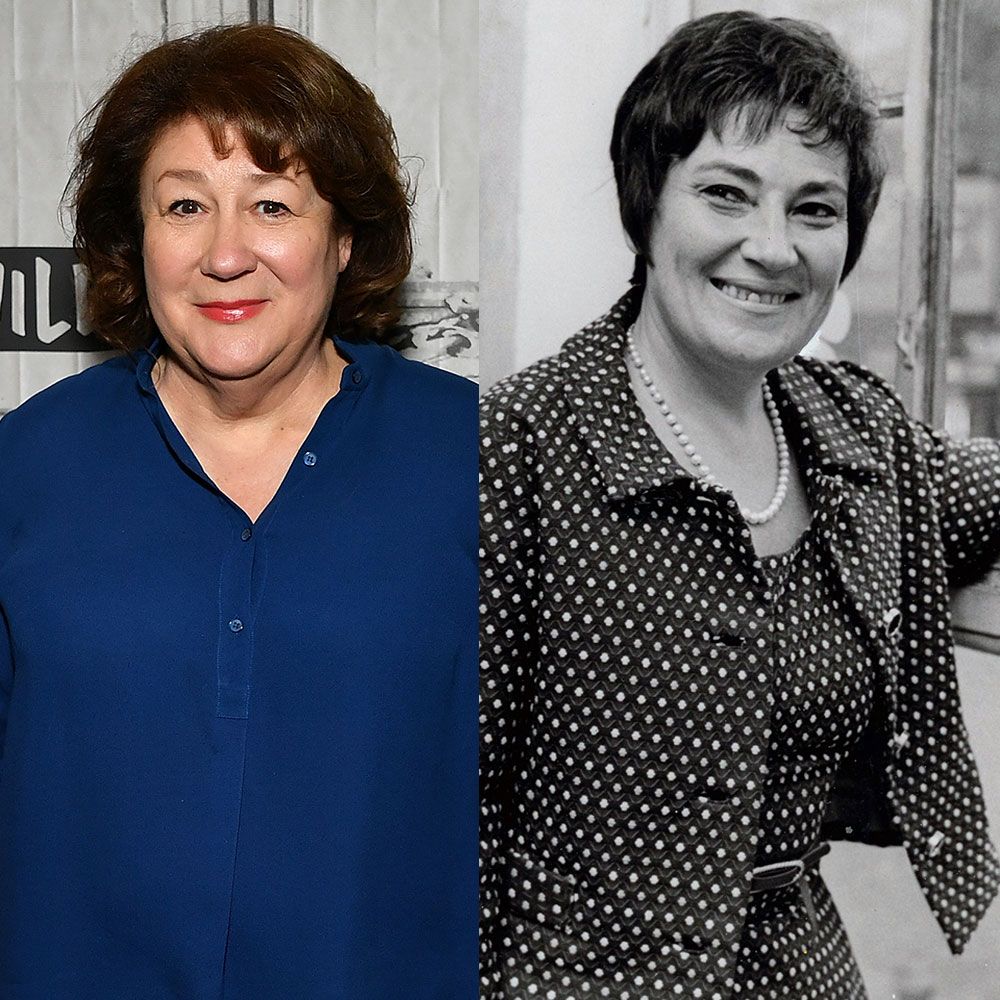 Margo’s been acting since 1990, and you may recognize her from another true crime show, The Act. She was Dee Dee’s mother, per IMDB. Margo also played Audrey Bernhardt in the TV series Sneaky Pete and Hillary Swank’s character’s mother in Million Dollar Baby. She’s taking on the role of Bella Abzug in Mrs. America.

Bella Abzug, a.k.a. Battling Bella, was a leader in Women’s Lib. She was also a lawyer, U.S. Representative, and civil rights activist, per house.gov. Bella became known as one of the most colorful and controversial House Members during the 1970s. She served in Congress from 1971 to 1977. She ran for Congress with the campaign slogan “This woman’s place is in the House… the House of Representatives!” 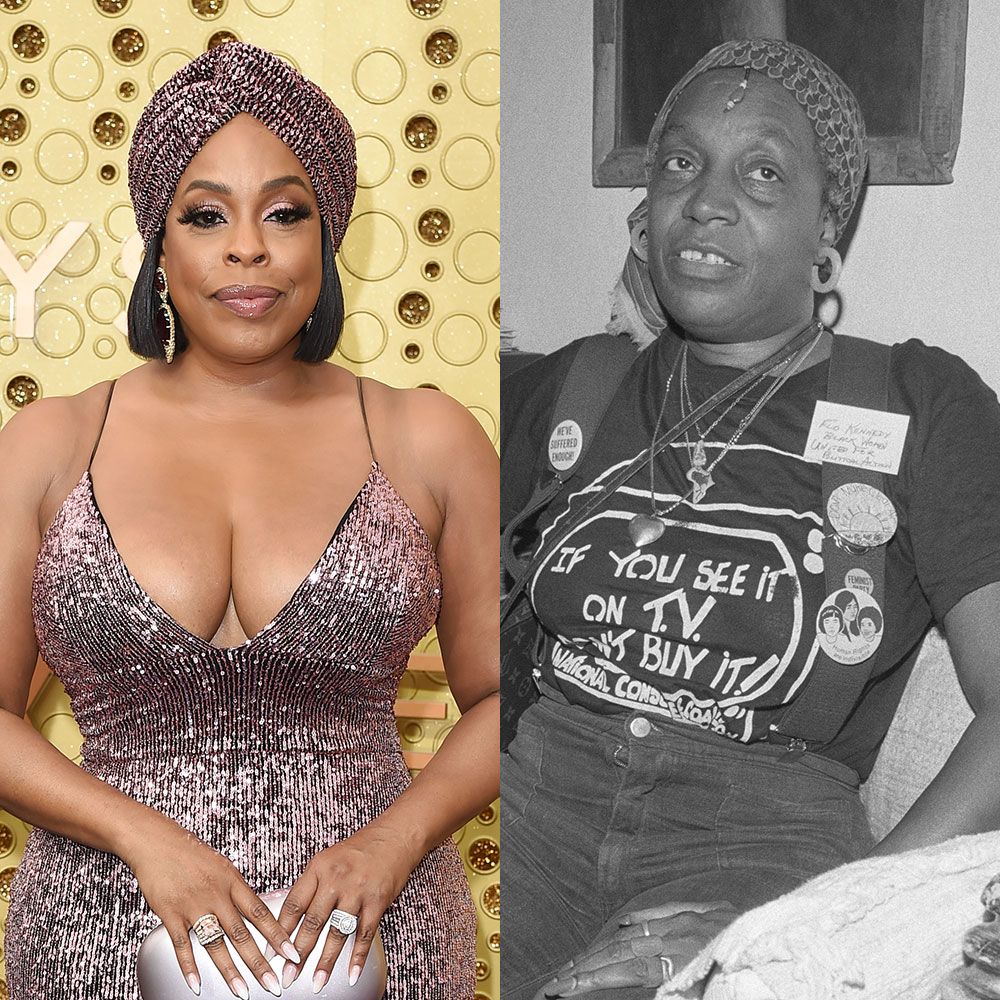 Niecy has been a Reno 911! mainstay as Deputy Raineesha Williams since 2003, per IMDB. That’s not all the actress has been up to, though. She’s also known for Claws, G Force, and Guess Who?

Florynce “Flo” Kennedy was a black feminist lawyer and activist who wore a trademark cowboy hat and pink sunglasses wherever she went. Her name isn’t quite as recognizable as the others, but her impact was right up there with Gloria’s. The NY Times called her a “feminist, civil rights advocate, and flamboyant gadfly.” Among her long list of activist achievements, Flo was a founding member of the National Women’s Political Caucus and led a mass urination by women to protest a lack of women’s restrooms at Harvard. She also used her legal expertise (she was one of the first black women to graduate Columbia Law School) to help repeal New York’s restrictive abortion laws. 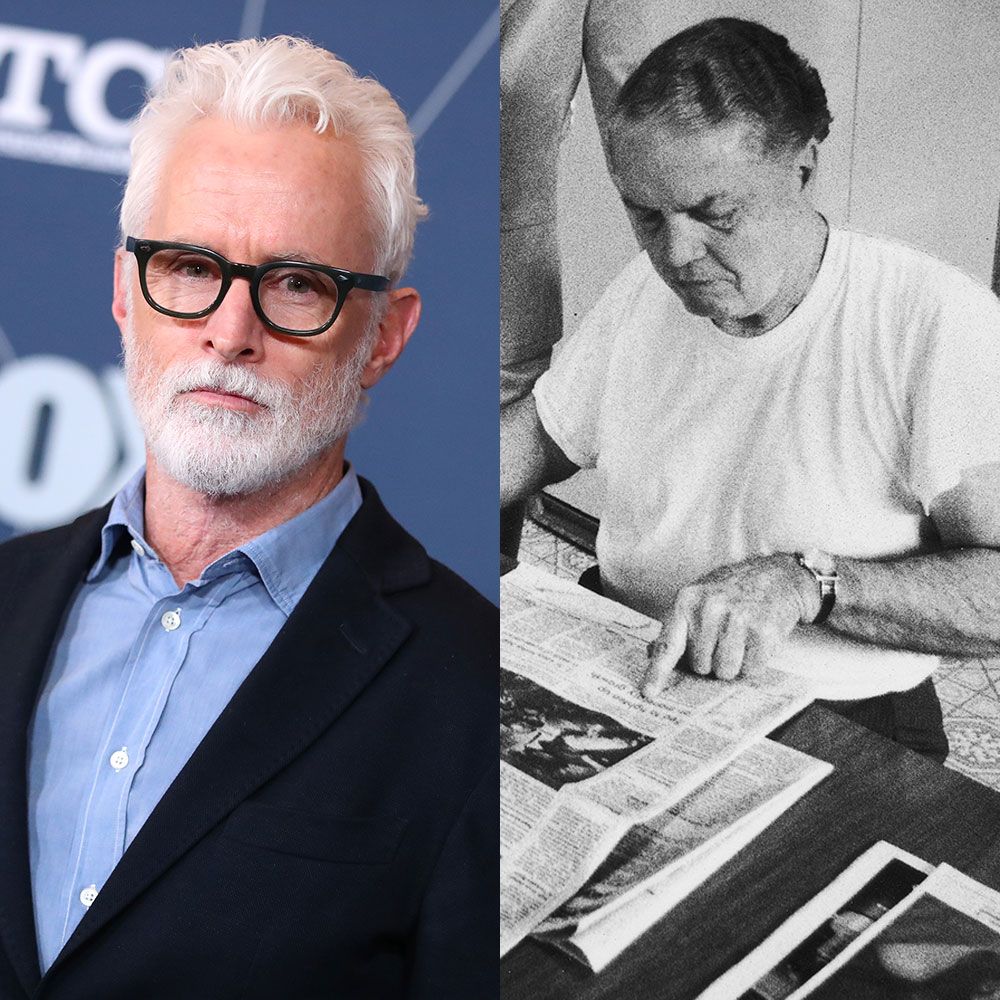 It’s hard to imagine John Slattery as anyone but Mad Men’s Roger Sterling. That’s far from his only gig. He’s played Howard Stark in The Avengers, Ant-Man, and Captain America, per IMDB. However, John’s turn as Fred Schlafly might just do the trick.

Fred Schlafly is Phyllis’ husband. He worked as an attorney, and they raised their six children together in Alton, Illinois, a suburb of St. Louis. He co-founded the Cardinal Mindszenty Foundation with his wife, his sister, and reverend Stephen Dunker. The independent Catholic organization opposed Communism and promoted traditional values. 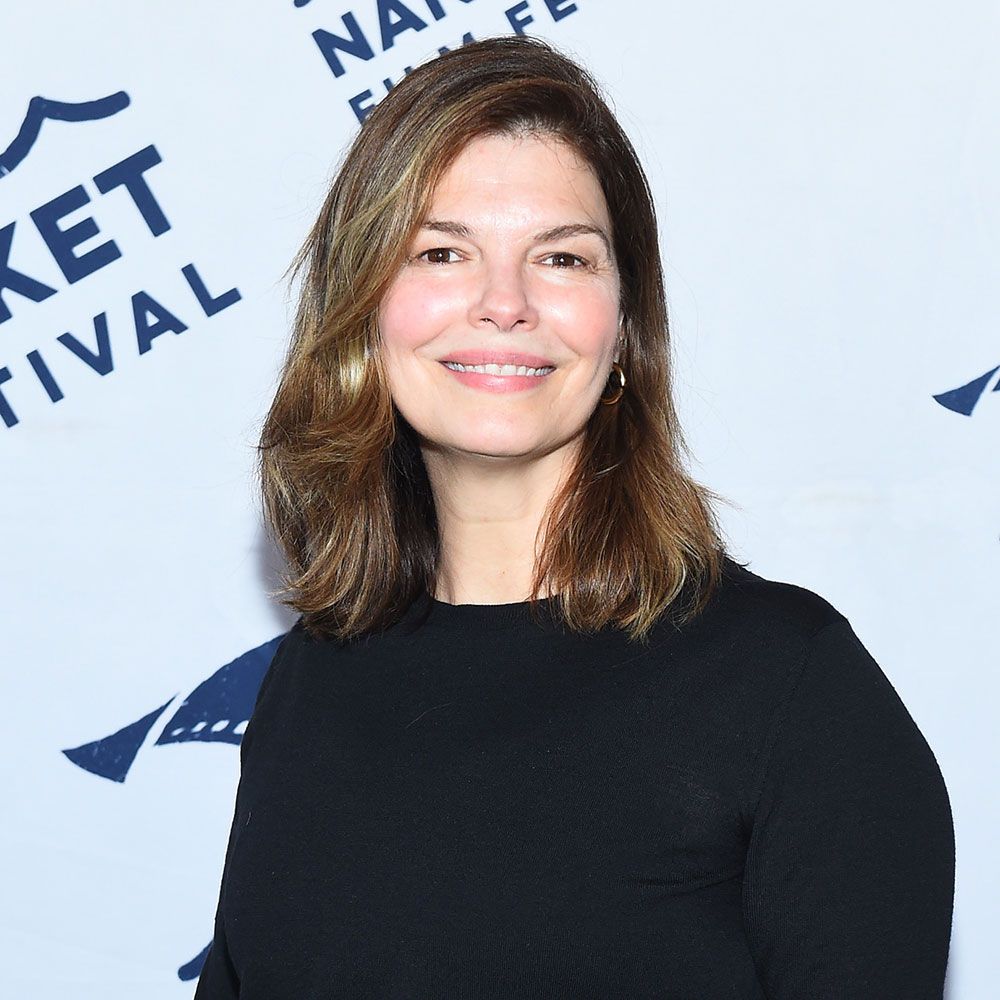 Jeanne Tripplehorn is best known for ’90s movies including Sliding Doors, Basic Instinct, and The Firm per IMDB. Since then, she’s appeared on TV in Big Love, Criminal Minds, and other shorts.

Eleanor Schlafly was a notable Catholic civic leader and activist who worked closely with her brother Fred and sister in law Phyllis to advance their cause, per Legacy.com. She volunteered for the Red Cross in St. Louis after WWII before working in New York City. In 1958, she returned to St. Louis and co-founded the Cardinal Mindszenty Foundation with her brother Fred, her sister-in-law Phyllis, and reverend Stephen Dunker. 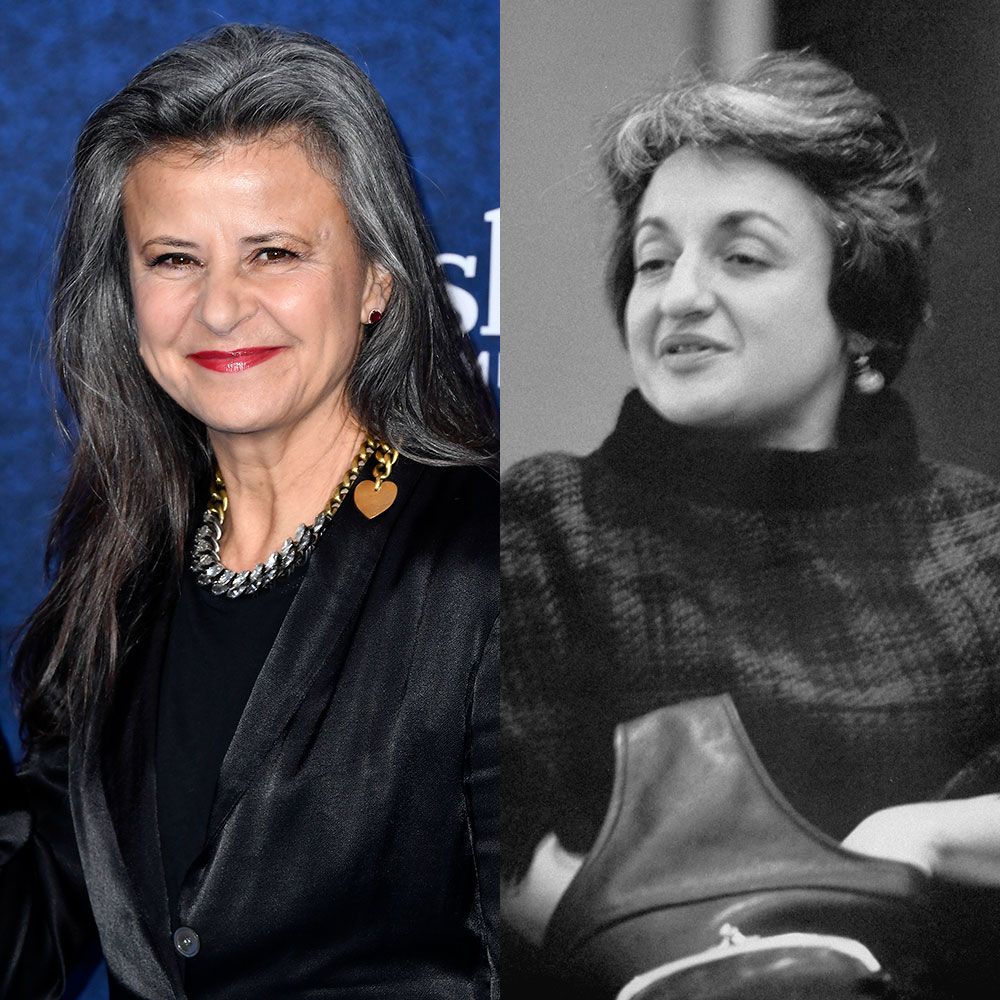 Betty Friedan authored the best-selling book The Feminine Mystique in 1963 based on her nationwide research and interviews with women. She was a leading feminist, journalist, activist, and co-founder of the National Organization for Women, per Womenshistory.org. She married Carl Friedan, and the couple had three children. Betty continued to work after becoming a mother.

Related posts:
April 15, 2020 Lifestyle Comments Off on The ‘Mrs. America’ Cast Is Based On A Slew Of Larger-Than-Life Personalities
Celebrity News:
Are Princess Beatrices recent events a way to distance herself from her father?
Hoda Kotbs absence from Today explained by Savannah Guthrie as well-known subs step in
The Chicks Postpone Shows As Natalie Maines Placed On Vocal Rest
Kim Kardashian Mocked Over Uncomfortable Office Chairs
Gloria Hunniford rushed to hospital after terrifying fall breaks her eye socket
Recent Posts