Country superstar Thomas Rhett and his wife Lauren Akins have an adorable love story. According to Taste Of Country, they met in first grade in Georgia and grew up as close friends. They dated for a bit in high school, but it just wasn’t right at the time so they went back to being friends. Fast forward five years; when Akins broke up with her boyfriend, Rhett moved in and the rest is history. The couple married in 2012 and three years later adopted a baby, Willa, from Uganda and welcomed a biological daughter, Ada, per Billboard. In early 2020, their daughter Lennon was born.

Rhett was nominated for Best Male Video of the Year at the 2021 CMTs. He also performed his song “Country Again” on the broadcast, per Sounds Like Nashville. While fans loved the performance, there was one conspicuous absence: his wife. Now, fans are wondering why she didn’t attend the award show, but the reason is actually quite simple.

Lauren Akins has a great excuse 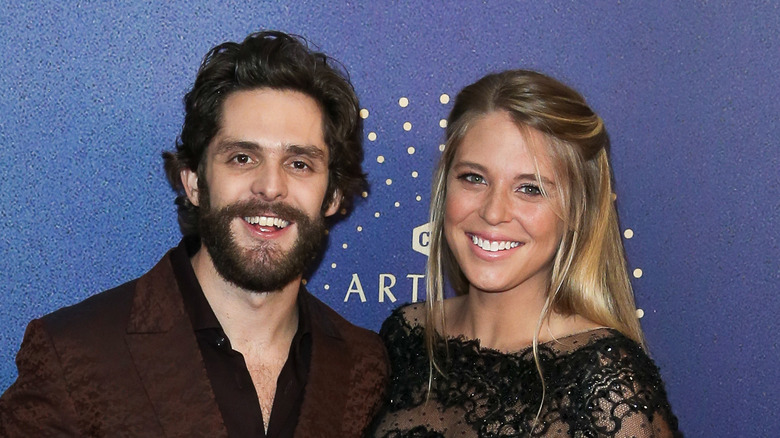 Thomas Rhett’s wife, Lauren Akins is pregnant with the couple’s fourth child, expected to be another daughter! On Wednesday, June 9, the day of the 2021 CMT Awards in Nashville, Rhett revealed that his wife was having a bad day with morning sickness, so she opted to stay home, per Us Weekly.

She also posted an adorable video on her Instagram of the couple’s current youngest child, 15-month-old Lennon laying in bed next to her mother. She captioned the short clip, “Lennon’s funny little personality is the best distraction from the nausea on my sick days (although they’re MUCH better now). Just have to shut us in my bedroom & watch Moana with sunglasses and Willa Gray’s watercolors all over her face…over & over…..whatever works.”

Rhett also shared a video of his wife wearing sunglasses to his Instagram Story (via AOL). In the video, Akins is laying in bed wearing sunglasses. Rhett laughs and asks, “Is it bright in here?” Akins responds, “I’m trying not to throw up, and you’re making fun of me,” to which Rhett replies, “I’m sorry, baby.” He captioned the clip, “I love you @laur_akins.” Clearly, these two were on the same page and have their priorities straight.