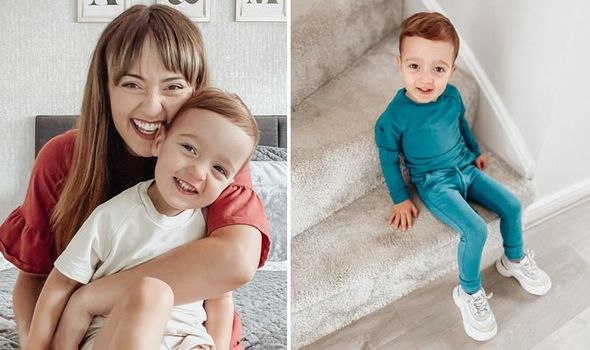 Tantrums are common in households containing young children, and it can sometimes be difficult to know what to do to stop toddlers from shouting and screaming. Luckily, one 27-year-old mother has shared a technique to stop and even prevent tantrums.

It can be difficult to think of new punishments to prevent children from being naughty.

Both parents and teachers have long sent children to the naughty step to teach them how to behave appropriately.

But what about the happy step?

Although it wasn’t her intention to share parenting advice, Amy Crisp, 27, from Cambridgeshire, has revealed a new way of stopping children from shouting, screaming, and crying – by sending them to the happy step.

Amy is the founder of toddler clothing and shoe business Colby and Co, named after her son Colby.

The 27-year-old often posts videos of Colby on her Instagram.

One video shows Colby misbehaving but then immediately snapping out of his tantrum after being sent to the happy step.

The video gained up to two million views, with many mums and dads admiring Amy’s parenting technique.

Amy explained how the idea of the happy step came about, saying: “Colby was having one of those hours where everything resulted in a tantrum or crocodile tears.

“Michael literally said to Colby, ‘can you please go and sit on the happy step and come back when you’re happier?’

“Colby waltzed back into the lounge after about 10 seconds like nothing had happened. It was hilarious.”

Michael is Amy’s husband, whose clever idea has changed the family’s lives.

Amy continued: “The next time we tried it, I filmed it to see if it was going to work its magic just as quickly and this time it took 0.0001 seconds for Colby to come out of his tantrum.”

The mother-of-one, who is expecting her second child later this year, explained she had tried the naughty step method with Colby, but the happy step worked better.

However, she added “it’s not something we use if Colby is genuinely upset, distressed or hurt”.

“Of course we ask him why he is upset and comfort him if he is upset but we have been using the happy step when Colby has tantrums,” Amy said.

“It helps for Colby to have a space where he can take a few moments of quiet and calm to gather his emotions.

“But I can confirm the happy step does not take longer than 0.00001 seconds.”

The blogger, who shares her day-to-day life and motherhood on My Mummy Diary, was “hugely surprised” the video of Colby was so popular.

She said: “Most people watching think it’s hilarious how quickly Colby’s mood changed. I would love to know how a toddler’s brain works.

“Lots of parents have said they will give it a go instead of the naughty step.”

Many mums and dads were quick to comment on Amy’s video of Colby, agreeing with each other that it was a good idea.

One parent wrote: “This is amazing.”

Another said: “Love love love this.”

One person commented: “So trying this.”

Another person added: “That step is magic!”

Related posts:
September 8, 2021 Lifestyle Comments Off on This is amazing! Mum shares trick to stop child’s tantrums in less than one second
Celebrity News:
Britney Spears Hits Back Ex-Husband for Saying She Hasn’t Seen the Boys for Months
Strictly Come Dancing signs Loose Womens Kaye Adams as fourth 2022 contestant
Jamelia pregnant! Star shares baby news with beautiful pics alongside her 3 daughters
Love Island winners Davide and Ekin-Su on cloud 9 as they arrive back in the UK looking happier than ever
Emmerdale spoilers reveal hospital drama on Rhona and Marlons wedding day
Recent Posts