A former Royal Marines Commando was horrified after discovering three dead tiger cubs in a freezer at an illegal breeding facility in South East Asia.

He is left disgusted to discover one illegal facility that preserves cubs and tiger bones in a huge freezer so that they can be sent to Vietnam.

Captive tigers are often bred and trafficked to meet demand for illegal products like tiger-bone wine and tiger bone glue, which are believed to have medicinal values in parts of Asia. 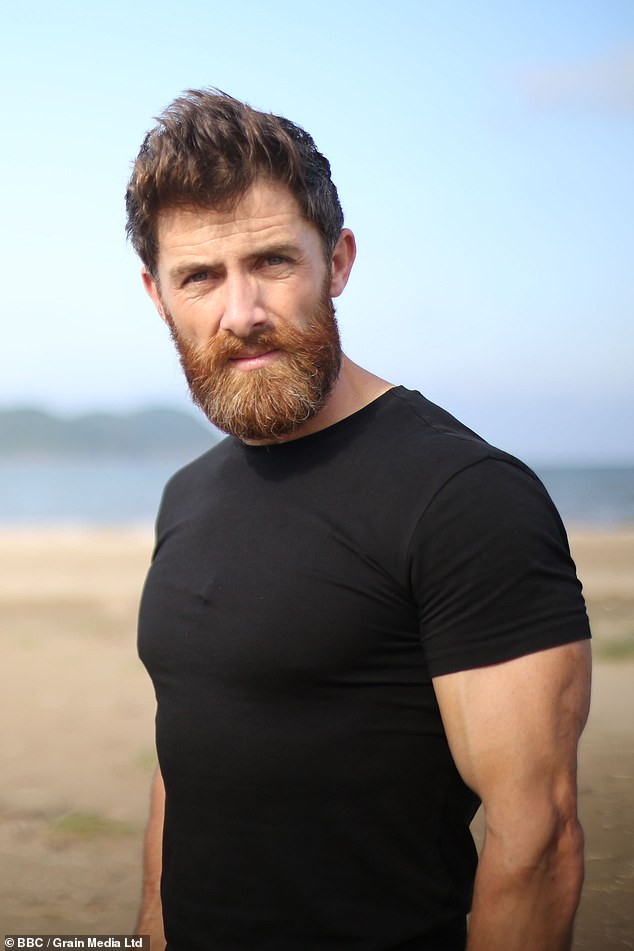 Aldo is seen carrying out a government audit of Say Namthurn zoo with wildlife forensic scientist Dr McEwing, one of the few people who can access tiger farms.

McEwing says: ‘My job is to go from country to country [investigating the tiger trade] and I just see death. I just see the scale of the operations, I just see the amount animals that are being killed for no legitimate reason.’

Examining the facility,  he says: ‘All the females are pregnant, so three or four cubs each. Eight females I think, 32 cubs every hundred days. Pretty impressive freezers there, but that could just be feed.’

Discussing the facility with Aldo, he says: ‘When we asked about cubs [they said] basically all the cubs go to Vietnam. So you can see all those industrial freezers and all those chest freezers on the outside?’ 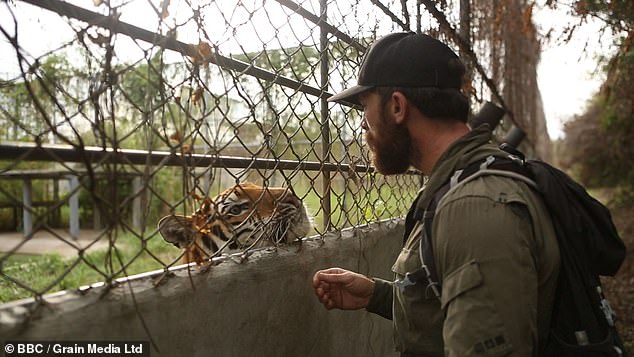 In Thailand, with the help of another investigator, Aldo discovers hundreds of secret captive tigers, ready to be sold, at various locations

‘Well yeah, it would certainly be worth having a look in some of those freezers’, explains the scientist.

Walking up to the freezers, Aldo says: ‘If you kind of sit here and film, i’m going to go out and see what’s in these freezers here.’ 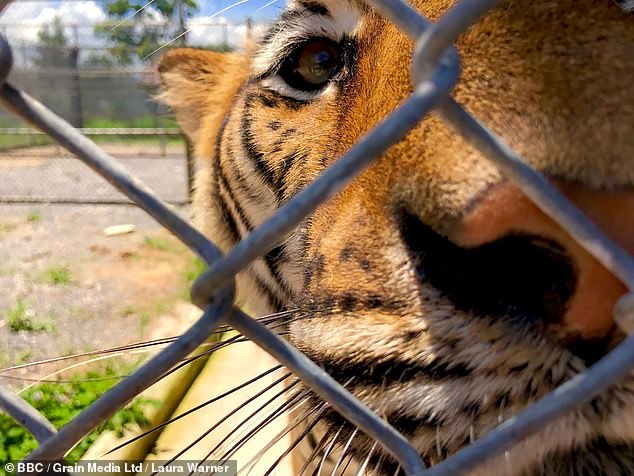 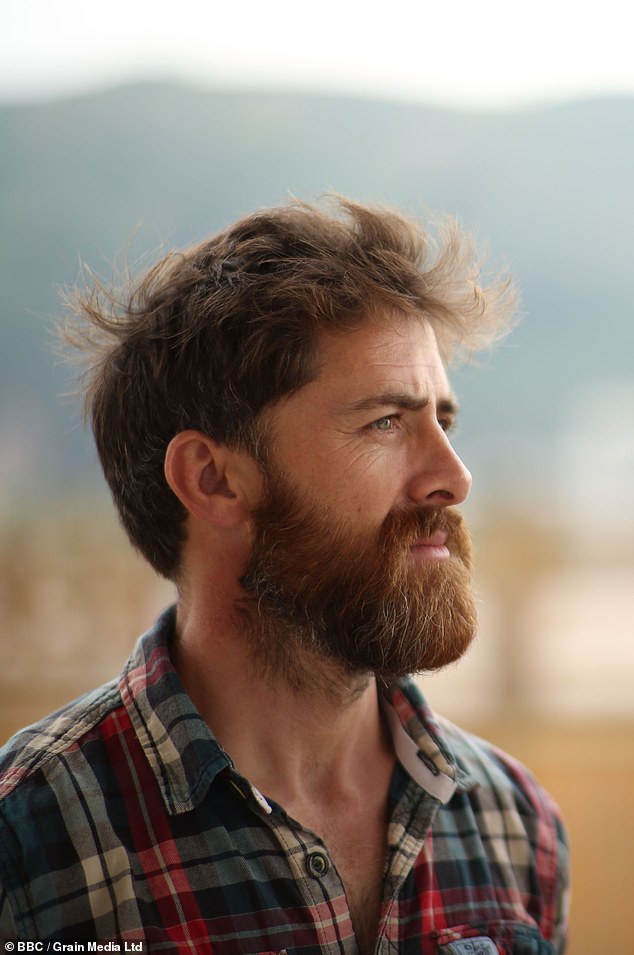 Following the filming of the documentary, the owner of Say Namthurn zoo was arrested by Vietnamese authorities for smuggling frozen tiger cubs into the country and was sentenced to six-years in prison for wildlife trafficking.

In Thailand, with the help of another investigator, Aldo also discovers hundreds of secret captive tigers, ready to be sold, at various locations – whose existence are kept secret from those who visit the so called ‘zoos’.

One zoo saw an estimated 200 tigers secretly hidden from tourists while later Aldo is seen breaking into another which despite being shut for two years, had cages full of tigers, presumably to be sold.

After sneaking in, the former marine says: ‘This zoo has been shut for two years and already I have seen over ten cats in here . This one is so skinny’. 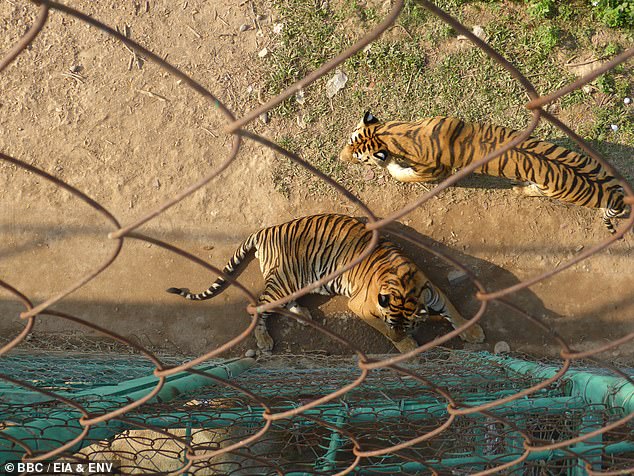 Aldo is seen breaking into another facility which, despite being shut for two years, had cages full of tigers 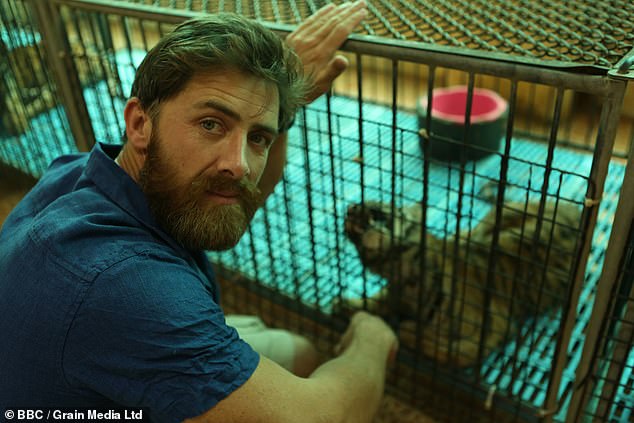 Aldo is horrified by what he discovers in the programme as he visits several facilities across Asia (pictured, with one caged animal)

Elsewhere in Laos, a vendor is seen openly selling a tiger byproduct, made up of crushed tiger bone, which has a street value higher than cocaine and is added to alcohol and consumed in an attempt to improve sexual performance in men.

In Vietnam, he discovers caged tigers being held in a dark basement next to a house where they were being force fed so they have more meat on them before being killed and cooked to order.

At the end of the documentary, Aldo presents his evidence to international decision-makers at the Convention on International Trade in Endangered Species (CITES) to act on. 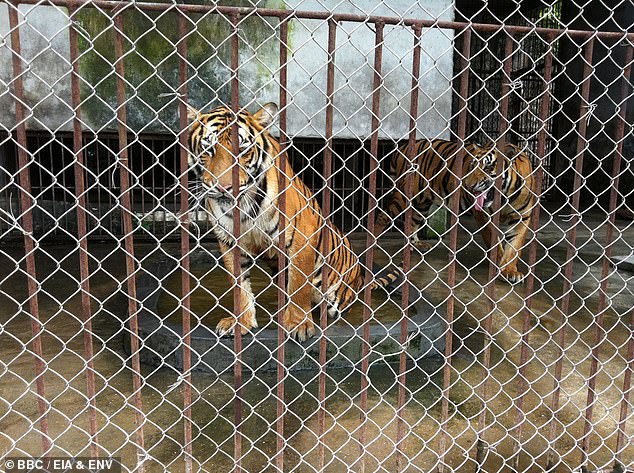 However, he is disappointed with the result when it is announced no action will be taken before a ‘process report’ is completed and Laos, the country in which he found the  frozen cubs, will have no sanctions placed on them at all.

‘Basically Laos has been let completely off the hook’, says Aldo, ‘It’s been given nine months grace.

‘What do you have to do, to place sanctions on a country that is openly and illegally trading in tigers and parts? This is a win for China, they’ll be happy with that outcome.’ 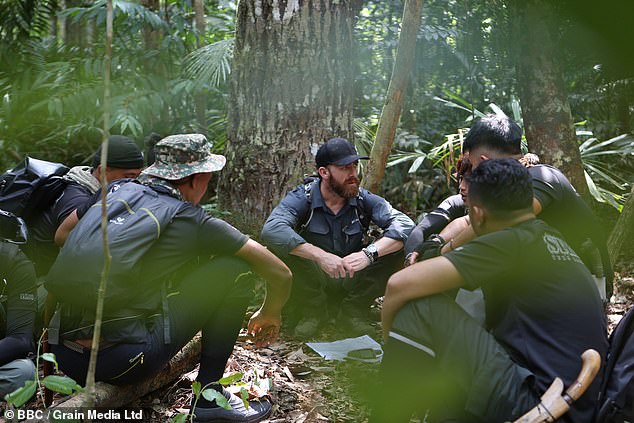 Reflecting on his journey later, he adds: ‘If China changes it’s policy on tiger farming and consumption, then others will follow.

‘So the Chinese government have to shift, but it’s public opinion that matters here. Tigers are being slaughtered, out of sight, it’s a hidden crime.

‘People need to see the horror of this trade, to then lobby their government. What is needed is video proof on what happens to tigers behind close doors.’

Tigers: Hunting the Traffickers airs on BBC2 at 9pm