This article discusses the finale of The Staircase.

The final episode of The Staircase gave riveted audiences what they’d been waiting for: an answer. It just wasn’t to the question they’d asked. When Michael Peterson (Colin Firth), the dissembling author accused of murdering his wife, Kathleen (Toni Collette), finally stood in a courtroom and took the blame for her death, 16 years had passed. “Guilty. I plead guilty,” Michael said, but it was preceded by a momentary smile that suggested victory. Michael was consenting to an Alford plea: he pled guilty to manslaughter, but legally maintained his innocence while acknowledging the state’s evidence could lead to a conviction.

A case that was fought on differing interpretations – of evidence, of intent, of the past – ended in a stalemate. That was the answer HBO’s real-life drama had always shown us. There is no simple, definitive conclusion to a loss of life this fraught. It was trench warfare and no one was left unscathed – even an owl was accused of causing Kathleen’s death. In this vexatious mystery, it was both a plausible theory and a grim joke. By the end the absurd had started to make sense. 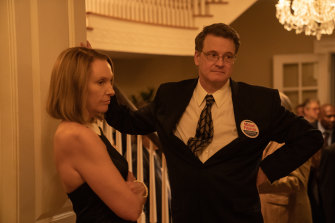 What happened to Kathleen Peterson (Toni Collette)? Was her husband, Michael (Colin Firth), to blame? The Staircase offered no easy answers.Credit:HBO Max/Binge

The case had twist after twist, including revelations of Michael’s bisexuality and the lost and then somehow found status of the blow poke, a fireplace tool that had been designated by the prosecution as a murder weapon Michael repeatedly struck Kathleen with. But the storytelling from the show’s creator, filmmaker Antonio Campos, was unerring. The Staircase built with inexorable dread to three moments: Kathleen’s death in 2001, the judicial decision in 2011 as to whether Michael should get a retrial, and his struggle to accept the Alford plea in 2017.

The timeline was not chronological; equally, blame was never clearcut. Over eight episodes Campos delivered three depictions of Kathleen’s death – an accidental fall while intoxicated down the stairs in the family home, Michael snapping and attacking her in a fit of rage after she caught him out lying, and the owl attack outside that led to her subsequent fall – with clear-eyed calm. The technical rigour of the storytelling was acute. It kept you rapt, but also observant. When a distraught Michael threw himself on Kathleen’s body as the authorities gathered, it was a florid, unexpected gesture. The viewer was already making judgments.

This was a deeper, solemn exploration of the true crime genre. On an emotional level it was forensic, with reaction shots that felt like they’d been wrenched from characters who desperately didn’t want to give anything away. An early sequence of the Peterson clan driving in a convoy of cars to a police station had the camera moving from vehicle to vehicle in a seamless shot, turning upside down like the family’s reality. They were all connected by an unseen bond, and nothing they could do, whether noble or self-destructive, could break it. 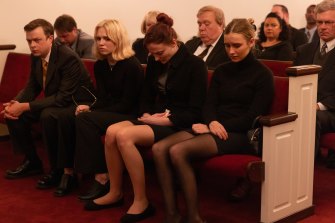 Outside pieces, such as the revelation of corruption in the investigatory process that earned Michael his right to retrial in 2011 after he’d exhausted the appeal process, fell into place. But within the remnants of his family the adult children struggled to stay afloat. Even in a moment of triumph, it was clear that Michael’s two sons, Clayton (Dane DeHaan) and Todd (Patrick Schwarzenegger), could only tussle for favouritism in his presence; adopted daughters Margaret (Sophie Turner) and Martha (Odessa Young) had their childhood memories torn asunder.

The triumph of Colin Firth’s performance was his emotional fluidity. Michael could be mean and pompous, caring and thoughtful. He would deceive Kathleen and then prove his love for his wife, whose burden of stress and displeasure masterfully seeped out of Toni Collette scene by scene. Which Michael was the true one? As played by Firth, all of them. The most vivid blow in the final episode may well have been Michael, at a 2017 celebration, casually turning on Margaret, calling her “Margie the martyr” as if it was still 2001 and she was a teenager and he had not spent 16 years trying to clear his name with her support.

Michael was attuned to the camera of French documentarian Jean-Xavier de Lestrade (Vincent Vermignon), dispensing anecdotes and offering insight. Campos’ drama was inspired by the previous Staircase, the ground-breaking true-crime documentary (currently streaming on Netflix). Watching a fictionalised version of it being made – with shots of the crew embedded with Michael and his lawyer, David Rudolf (Michael Stuhlbarg) – added another layer to the narrative. The audience was always aware of how stories were being assembled, told and retold so that they competed for ascendancy. 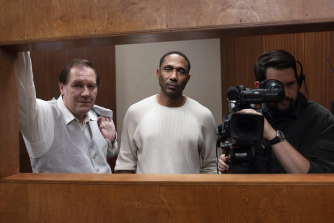 Those stories took over lives. Sophie Brunet (Juliette Binoche) began as the documentary’s Parisian editor and ended as Michael’s partner, moving to Durham in North Carolina and dedicating her life to his cause. Trying to pin down a truth nearly broke her, as she uncovered confirmation of Michael’s male lovers he’d previously denied, and their dissolution was harsh as she refused to allow him to prevaricate. “He lied about everything,” Sophie lamented to Jean-Xavier, yet she remained convinced of his innocence. It was fitting.

Michael’s admission at the close of the final episode was more subtle. “It wasn’t a lie,” he observed. “It just wasn’t the whole thing.” Was that omission or deceit? Like every fault line in this fascinating series, you could make a case for either side. The show built not to an ending, but a realisation – that justice and the truth were separate factors. Instead, The Staircase took you back to the night of Kathleen’s death, as if the obvious finale was to start again. It was a loop: the characters kept coming back to that fateful 2001 night, the audience to the first episode. What a cruel triumph.

The Staircase is on Binge and Foxtel.

Find out the next TV, streaming series and movies to add to your must-sees. Get The Watchlist delivered every Thursday.