Voters have scaled back their support for Prime Minister Scott Morrison after political storms over the coronavirus vaccine rollout and pandemic response, cutting his net performance rating from 15 to 8 per cent.

The federal government has also lost its lead on the management of health and aged care, with 29 per cent of voters naming Labor as the best party to handle the issue compared to 27 per cent who prefer the Coalition. 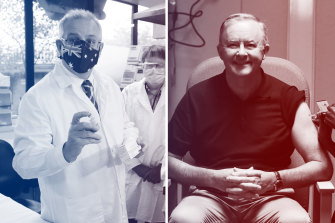 The findings are contained in a new survey that shows slight gains in primary vote for both major parties over the past month, with the Coalition rising from 39 to 40 per cent and Labor up from 35 to 36 per cent.

The Resolve Political Monitor, conducted for The Sydney Morning Herald and The Age by research company Resolve Strategic, reveals a softening in support for the government on key measures despite the stability on overall voting intention.

Resolve director Jim Reed said the result in two-party terms was “too close to call” but said voters appeared to lose some of their confidence in Mr Morrison in a shift that was outside the margin of error.

The number of voters who said Mr Morrison was doing a good job slipped to 48 per cent from 53 per cent one month ago, while the number who said he was doing a poor job rose from 38 to 40 per cent.

This cut Mr Morrison’s net performance rating to 8 per cent from 15 per cent one month ago.

“The spontaneous comments submitted by voters to the survey confirm that some are questioning whether the government is becoming more reactive.”

The Resolve Political Monitor was conducted from June 8 to 12 and asked 1600 voters about their views in online questions put in a random order to avoid a “donkey vote” with the results. It has a margin of error of 2.5 per cent.

However, the softening in support for Mr Morrison did not translate into a boost for Labor leader Anthony Albanese, whose net performance rating was minus 13 per cent, slightly worse than the figure of minus 12 per cent in the last survey.

Mr Morrison retained a strong lead as preferred prime minister, favoured by 46 per cent of voters compared to 23 per cent for Labor leader Anthony Albanese, with 32 per cent undecided.

The Prime Minister led on this measure by 48 to 25 per cent last month, which means the biggest shift was among voters who moved away from both leaders and were undecided on which one they preferred.

Support for the Greens fell from 12 to 10 per cent and support for independents slipped from 5 to 4 per cent, while Pauline Hanson’s One Nation rose marginally from 2 to 3 per cent.

All changes in primary vote were within the margin of error, but the three Resolve surveys since April have shown a shift toward the major parties.

“Voters are increasingly moving away from parking their votes with minor parties to picking between the major parties as the contest of policy and performance sharpens, but they are not yet locked in to those choices,” Mr Reed said.

Voter support for minor parties and independents was 29 per cent in April but has since dropped to 24 per cent. At the same time, the uncommitted vote has gone from 21 to 28 per cent.

Some of the biggest changes in the third Resolve Political Monitor, all of them outside the margin of error, tended to erode the government’s lead on policy issues or political management.

Labor recovered its lead on health and aged care, with 29 per cent of voters saying the party was best to handle the issues compared to 27 per cent who favour the Coalition.

This reversed the result one month ago when the Coalition gained a lead of 34 to 29 per cent on this measure in the wake of the federal budget, which $74.6 billion in new spending including a response to years of neglect in aged care.

“The Coalition’s holding of health and aged care as a strength after the budget in May was unprecedented and it has proven to be temporary,” Mr Reed said.

“Its reverted to Labor’s side of the ledger and has likely been hastened by recent issues with the vaccine rollout, especially in aged care.”

There were also signs of doubt among voters about Mr Morrison and the government after a month that included a stand-off between the Victorian and federal governments over financial support for people who lost income during the state lockdown.

Asked about which party and leader were best for the country, 37 per cent named the Coalition and Mr Morrison, down from 40 per cent one month ago.

None of these shifts generated significant gains for Labor and Mr Albanese, with voters moving to the “undecided” camp instead.

Only 19 per cent of voters thought Labor and Mr Albanese offered strong leadership and only 20 per cent considered them competent, roughly half the support for the Coalition and Mr Morrison.

Asked which party and leader were listening and focused on the right issues, 23 per cent named Labor and Mr Albanese and 30 per cent named the Coalition and Mr Morrison.

Mr Reed noted the proportion of voters uncommitted in their choice rose three percentage points to 28 per cent.

“The general pattern is one where the Coalition and Scott Morrison continue to enjoy leads in most areas but with many of these leads being eroded slightly over the last month,” he said.

“It does appear that at least some voters are reassessing Scott Morrison noting recent attention on vaccines, quarantine, aged care, Christian Porter and the Tamil family.”

Because the poll asked voters to nominate their primary votes in the same way as they filled in their ballot papers for the lower house at an election, there is no “undecided” category in the results, a key difference with some other surveys.

Resolve is a polling company established by Mr Reed, who was previously group director of research and strategy at CT Group – formerly Crosby Textor – and senior research director at Newgate Communications.

Mr Reed’s work has included contracts with the federal government, such as the Treasury, and his work at Newgate included polling for the Yes campaign on marriage equality.

Related posts:
June 14, 2021 Lifestyle Comments Off on Vaccine rollout stumbles lead to slight drop in support for Coalition
Celebrity News:
What Is Offset's Real Name?
How Did Courteney Cox Meet Boyfriend Johnny McDaid? What Is Their Age Difference?
It Was Love at First Sight When Track Athletes Tara Davis and Hunter Woodhall Met at Age 16
Scooter Braun Officially Files For Divorce From Yael Cohen – & Already Has A Prenup In Place!
OMG! Prince William Is Also Writing a Book After Harry's Memoir News
Recent Posts