RMIT and La Trobe University have moved to let go of hundreds of casual staff, in a sign of the mounting financial pressure on Australia’s universities.

What is believed to be hundreds of “non-essential” RMIT research and professional staff casuals worked their final day at the university on Friday. 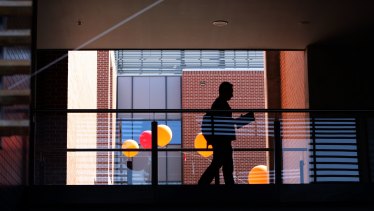 Hundreds of casual staff at RMIT, including research assistants, library workers and IT staff, were let go on Friday.Credit:Rob Homer

La Trobe Vice-Chancellor Professor John Dewar similarly emailed staff on Thursday evening informing them that all “non-essential” casuals would be let off on May 1 as the university prepares for “severe” financial woes.

The job cuts represent the first significant loss of university staff due to the coronavirus pandemic.

Australian universities fail to meet the criteria of the government’s JobKeeper wage subsidy program in its current form, with Universities Australia chair Deborah Terry warning up to 21,000 jobs could be lost in the next six months.

A block on international students is also projected to cost universities between $10 billion and $19 billion between 2020 and 2023.

RMIT casuals who lost their job on Friday include research assistants, student support service staff, library workers and IT staff. Casuals from the RMIT ABC Fact Check service have also been let off in recent weeks.

She said the "significant and evolving situation" had forced the university to focus on "continuing our essential work of providing a quality education".

"With that focus in mind, we are pleased to confirm all currently filled casual roles directly related to academic teaching will continue to be supported throughout semester one at a minimum," Ms Shevlin said.

Sam Gibbard, president of the RMIT division of the National Tertiary Education Union, said many staff discovered they had lost their jobs via email or text on Friday.

“I’m disappointed that it all appears to be very under-handed,” Mr Gibbard said.

“We’re not talking a lot of money for the university here. If you’re a student, that casual work can be the difference between paying rent or not.”

The federal government this week guaranteed $18 billion in funding for domestic undergraduate education. Universities welcomed the promise but warned it would not plug the “big hole” blown in their budgets.

Mr Gibbard said other staff were “very worried about what will come next”.

“That could well be identifying more staff roles that are non-essential and cutting them.”

On Friday the Victorian government announced $68.9 million in crisis support for TAFEs, along with locking in $191.1 million in previous funding, similar to the federal government's promise on universities.

Professor Dewar told La Trobe staff that from May 1, casuals “will only be retained if they are signed-off as ‘essential’ by the relevant SEG [Senior Executive Group] member as the portfolio lead”.

“We will do everything we can to ensure that casuals deemed ‘non essential’ in their current roles will be found other work in the University wherever possible,” he wrote.

Professor Dewar said the university expected to lose between $120 million and $150 million in revenue in 2020.

“To put that in perspective, our budgeted operating surplus for the year was $30m. That is the money that we would have used to reinvest in our infrastructure (buildings, IT, etc),” he wrote.

“That is a very big hit indeed.”

To be eligible for JobKeeper, universities must demonstrate a 30 per cent revenue decline or 50 per cent if their turnover is over $1 billion. They were last week excluded from more generous eligibility conditions for registered charities.

Professor Dewar said forced redundancies at La Trobe were possible in the future.

He proposed a series of voluntary measures staff could take to soften the financial impact on the university, including giving up between 5 and 20 per cent of their salary.

The executive teams of RMIT and La Trobe have already accepted a pay cut of 20 per cent.

Related posts:
April 17, 2020 Lifestyle Comments Off on ‘Very big hit indeed’: RMIT and La Trobe cut hundreds of casual staff
Celebrity News:
‘Avengers’ Male Cast Defends Chris Pratt Over ‘Worst Hollywood Chris’ Label, but It Backfires
Dax Shepard Covers His Face With His Shirt While Getting Food Delivered
Scott Disick Hilariously Pokes Fun At Kourtney Kardashian's Use Of WAP Lyrics On Instagram!
Ina Garten Reveals What's 'Really Impressive' To Her at Dinner Parties
Jacqueline Jossa has a secret tattoo that was inked by husband Dan Osborne
Recent Posts
This website uses cookies to improve your user experience and to provide you with advertisements that are relevant to your interests. By continuing to browse the site you are agreeing to our use of cookies.Ok