This inspired circus from Vietnam draws upon twin impulses in the contemporary art form to create something stunning, immersive and new.

The director of the Vietnamese Bamboo Circus, Tuan Le, has worked for Cirque du Soleil, and that experience ties into the immaculate scenography and epic scale of A O Lang Pho.

Yet the show is ambitious in another sense – one championed by the Brisbane-based Circa. It has a soulfulness, a willingness to push at circus’ boundaries with theatre and contemporary dance, and the ability to choreograph its acrobatics into an intricate dance of human situation and emotion.

The piece animates with sublime vitality one strand of the Vietnamese story: the rapid change from rural to urban life. 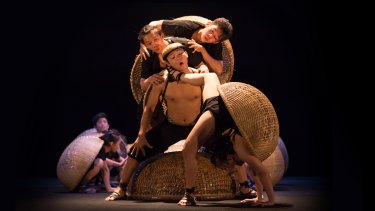 Gentle rhythms of country life surge into acrobatics – with balance, juggling, contortion and twirling that verges on martial art – but it’s all so seamlessly embedded in atmospheric visual theatre that you don’t think of the circus as “tricks” per se. The physical marvels are more like an expanded vocabulary in the master language of performance.

A poignant transition sequence hovers over the suggestion of Vietnamese boat people, refugees displaced by the horrors of war. But comedy gets much fuller play as we shift onto the streets of Vietnam’s bustling metropolises.

The stage teems with the tumult and profusion of urban living. There are overburdened cyclos, and bamboo frisbies flying over hectic traffic scenes. There’s an improvised beatboxing and hip-hop contest, and a street hawker clawing her way across the audience to sell her wares.

Luminous clowning captures the humour of cheek-by-jowl existence – with romance, cooking and fitness blended into an amusing sequence set in apartments – while the whole cast assembles into a sky-high factory line for the industrial mass-production of baskets from the show’s beginning.

That contrasts with a Roue Cyr routine, built around the quieter image of a broken basket spinning in the wind on a side-street.

This vision of country and city is world-class circus in which every aspect of performance craft combines: the boundless invention of moveable bamboo set design, Vietnamese music ancient and modern, imaginative choreography and physical theatre, painterly lighting, and of course, impressive acrobatic display.