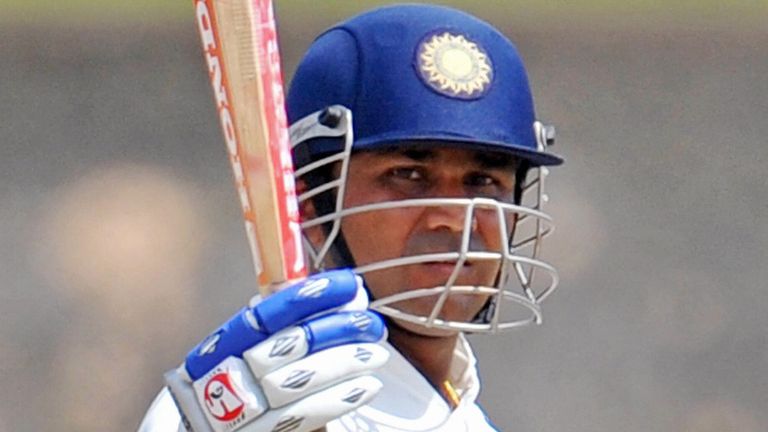 Rob Key’s XI took advantage of winning the toss under cloudless skies to reach 277-5 at the close of the first day of the ‘Battle of the Eras’ Virtual Test at Lord’s.

With the explosive pair of Ben Stokes and AB de Villiers at the crease, Key’s side will be looking to push on towards, and possibly beyond, 400 in order to put Nasser Hussain’s XI under pressure. 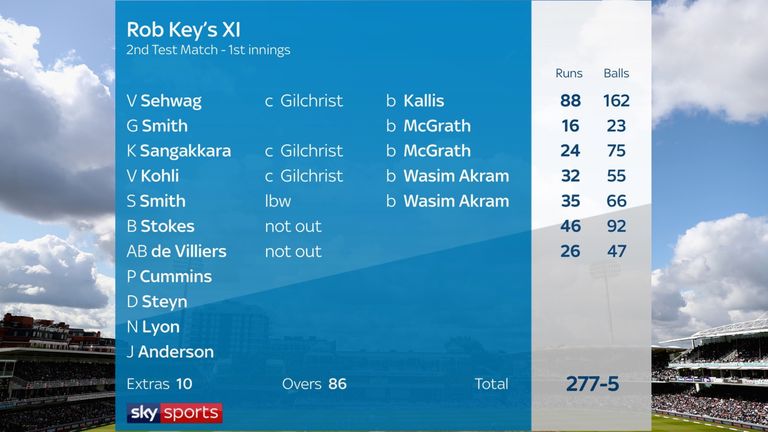 The simulated Test is being played to mark 30 years of cricket on Sky Sports, with Nasser picking players from the first 15 years and Rob from the most recent 15 – watch how they selected their teams below.

The game is also the second virtual encounter between Hussain and Key, with Nasser coming out on top when England sides from their respective eras went head to head a few weeks ago.

On day one of Thursday’s fixture, Virender Sehwag led the way for Key’s team with an innings of 88, which flew in the face of his previous Test average of just 27.80 in England.

However, the powerful middle order of Kumar Sangakkara, Virat Kohli and Steve Smith failed to convert useful starts, and they will be hoping that doesn’t come back to haunt them later in the game. 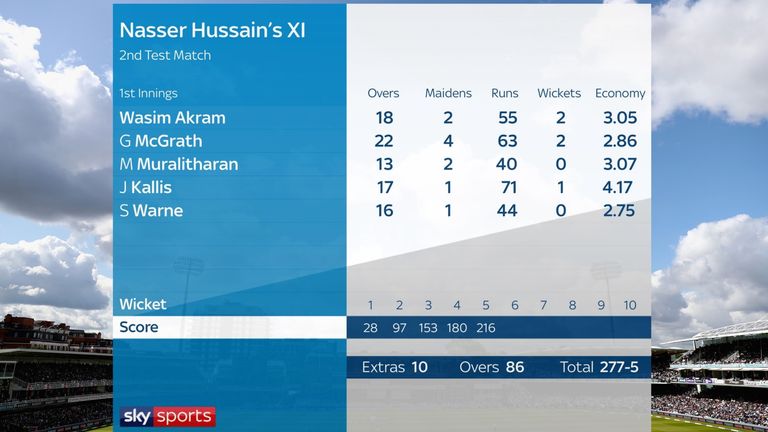 Graeme Smith – having chosen to bat – was soon into his stride at the ground on which he struck 259 in 2003, still the highest individual score by a visiting player at Lord’s.

Two boundaries came in Wasim Akram’s second over, but Glenn McGrath managed to produce just enough movement from his favoured Pavilion End to defeat a Smith forward prod and clip the off stump.

Teams are in .. bit of a gamble to go 2 spinners in May at Lords but they are quite good spinners !! Bad toss to lose .
Glen McGrath at Lords 26 wickets at 11.50 !! Put that in your computer this morning @Benedict_B pic.twitter.com/gYQe7MeXI2

For a man with 26 wickets in three Lord’s Tests at a miserly average of just 11.50 apiece, it was no real surprise, but Smith had started so confidently that he will feel disappointed not to have progressed beyond the first half hour of play.

Sangakkara started in circumspect form, with just a single coming from his first 20 deliveries, but a boundary off his former team-mate Muttiah Muralitharan helped him on his way and he and Sehwag posted their fifty partnership just before lunch, which was taken at 86-1 with Sehwag just a single short of his half-century. 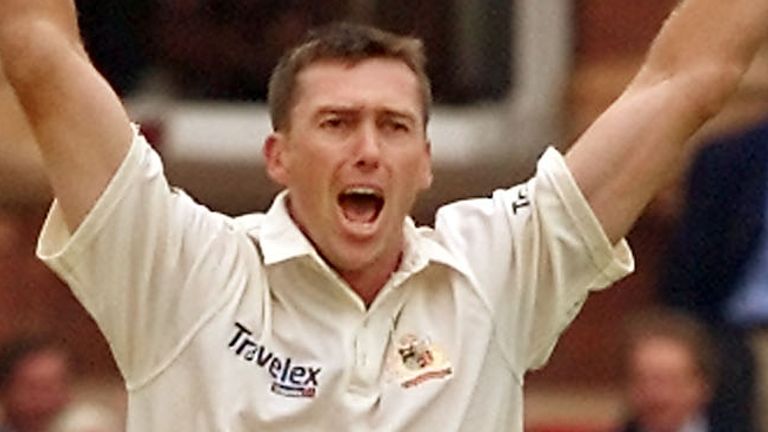 The Indian duly completed it in the first over after the break with a trademark thrashed four through the covers off McGrath.

But the Aussie seamer removed Sangakkara four overs later with a superb away-seamer which only a player with a Test average of 57.40 would have been good enough to even edge into the waiting gloves of Adam Gilchrist.

Sky Sports statistician Benedict Bermange is using a cricket simulation that takes into account batting averages, strike-rates, bowling averages and bowling speeds and plays out a five-day Test match based on those figures.

That wicket brought Virat Kohli to the crease to join Sehwag and the two embarked on another fifty partnership, with Kohli very much the aggressor.

He struck six sumptuous boundaries before Wasim Akram produced some magic with a lifting delivery which clipped his glove and presented Gilchrist with a straightforward catch. 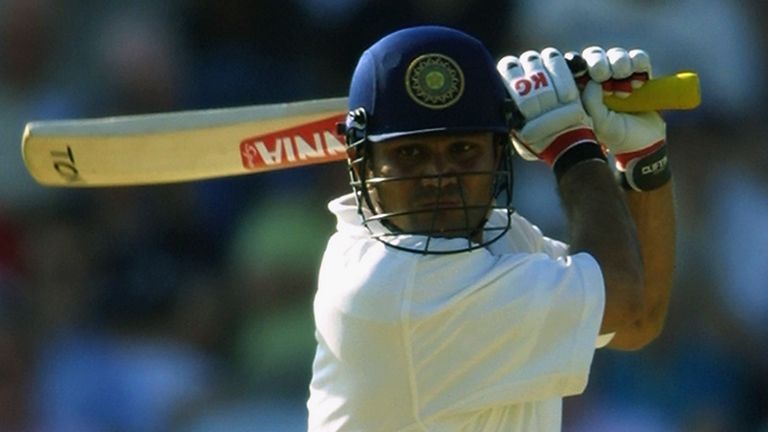 Like Kohli before him, Steve Smith started confidently on the ground where he had struck a double century in 2015 and was struck by Jofra Archer last summer, when he had to retire hurt with concussion.

Akram’s mastery of the older ball accounted for him, though, a whippy delivery reverse swinging into the Australian’s pads to pin him lbw for 35.

Related posts:
May 28, 2020 Lifestyle Comments Off on Virtual Test – Nasser Hussain vs Rob Key: Virender Sehwag stars for Key’s XI on day one in Battle of the Eras
Celebrity News:
Tom Hanks & Rita Wilson Arrive in Greece to Celebrate His Birthday!
Get to Know Marwan Kenzari & His Girlfriend Nora Ponse!
Jordyn Woods, Sailor Brinkley-Cook & Vanessa Hudgens Rock White Swimsuits As They Celebrate Summer
Candace Owens Allegedly Scams Millions Out of Republicans via Anti-Black Lives Matter Initiative
Brooklyn Beckham Is Engaged to Actress Nicola Peltz
Recent Posts
This website uses cookies to improve your user experience and to provide you with advertisements that are relevant to your interests. By continuing to browse the site you are agreeing to our use of cookies.Ok