When Amy Shark took out the coveted Album of the Year award for her debut effort Love Monster at the 2018 ARIA awards at The Star in Pyrmont, it should have been the night of her life.

The award, her fourth that year, was the culmination of more than a decade of trying to crack the notoriously difficult Australian music scene.

When Shark’s name was read out, the third time that evening, she turned to kiss her husband, Shane Billings, then embraced Sony Music boss Denis Handlin who was in the row behind, and hugged her team of managers who sat beside her. 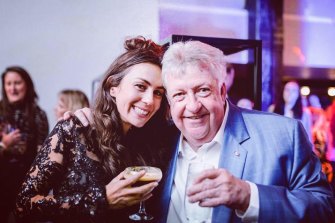 Ousted Sony Australia chairman Denis Handlin with chart-topping Australian artist Amy Shark. Handlin has gone amid a probe into a culture of harassment at the company.Credit:Facebook

On stage, she thanked the people who helped make her album. Her producers, her management and the fans. But she didn’t thank Handlin, or the Sony label.

Although Shark had thanked Handlin in earlier acceptance speeches that night, he was furious she hadn’t thanked him or Sony in her speech for the major award, according to those around him on the night who spoke to The Sun-Herald on the condition of anonymity.

For music industry veterans with long memories, Handlin’s reaction wouldn’t come as a surprise. In the late ’90s he was stood down from his position as Sony Music Australia CEO after a group of executives complained to head office in New York about his behaviour. 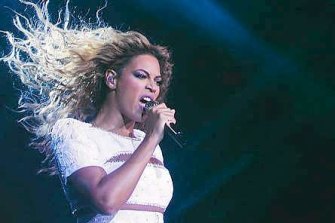 When Beyonce’s world tour came to Australia in 2013, a small number of Sony executives were invited to meet the superstar backstage. The fairly relaxed affair came with one condition – no one was to kiss Beyonce because the singer was protecting her voice and didn’t want to risk catching an illness.

The Sun-Herald has been told that Handlin ignored the instruction and kissed Beyonce anyway. He boasted of it during a staff meeting the next day, according to a source who was there, saying he wouldn’t be told what he can and can’t do in his territory.

A former staffer, who asked to remain anonymous as she still works in the industry and fears retaliation for speaking out, said she experienced Handlin’s wrath over a minor mistake – not providing him with an artist’s interview schedule. Her manager told her Handlin wanted her fired.

“Denis threatens you and he punishes you, but he never does it to your face,” the staffer said. “He does it via all these guys who come up to you and tell you he is angry and disappointed and he wants you out and you are a traitor to the company.”

The Sun-Herald can reveal that Sony Music’s head office has been aware of Handlin’s behaviour – and the toxic culture within the Australian business – for decades.

In the late ’90s, a group of Sony Music Australia executives complained to US head office about Handlin’s behaviour.

A senior US Sony executive got in touch with one of the executives to establish what the workplace culture was like at the company’s Sydney office. 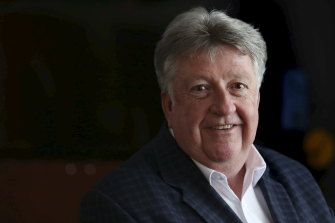 Until Monday, Denis Handlin was the most powerful person in music in Australia. Credit:Sasha Woolley

“He called me and asked ‘What’s it like working for Denis Handlin?’ and I replied ‘Utterly miserable’,” the former executive who received the call and asked to remain anonymous because they fear reprisals recalls.

He said after Handlin was appointed CEO in 1984 he had become more confident and powerful.

“His behaviour worsened year by year . . . there were times you were straight out persecuted,” the former executive said.

Handlin was stood down in the winter of 1998 and ten executives were flown to New York for one-on-one meetings to discuss their complaints. Three executives who reported to Handlin at the time told The Sun-Herald they were assured he wouldn’t return to the company.

But a short time later they were summoned to the Crowne Plaza Terrigal on the NSW Central Coast for a conference. There, Sony’s global head of HR and an external consultant who specialises in organisational psychology, according to an internal memo from the time seen by The Sun-Herald, tried to convince the executives to continue working under Handlin.

Over the course of the weekend the executives outlined their concerns and eventually developed a code of management conduct called ‘Sony Leadership Code Australia’. The code, which The Sun-Herald has seen a copy of, included rules such as “Have respect for each individual”, “Select and promote based on ability and performance not gender or race” and “Behave ethically, have personal integrity”.

At the end of the conference, two of the executives resigned immediately. Within four years, none of the ten executives who complained about Handlin still worked for Sony Music Australia.

In a statement, Sony Music Entertainment said: “We are not in a position to comment further on allegations concerning matters which occurred over 20 years ago particularly given that the persons involved at that time are no longer at the company. To the extent these matters have been raised, Sony Music will be reviewing them.”

The issues at Sony Music Australia extend beyond the chief executive’s office.

In April The Sun-Herald revealed that Sony Music Australia had dismissed the company’s vice president of commercial music Tony Glover after an internal investigation found he had bullied and harassed a number of staff members. Mr Glover denied any wrongdoing and said at the time he had never been disciplined prior to his dismissal.

“There’s me and there’s the complainants and I guess the amount of complainants outweighed my word,” he said at the time. 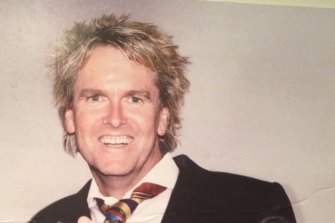 Former Sony Music Australia executive Tony Glover has been sacked after an investigation found he had bullied and harassed staff.Credit:Facebook

“I had never been sanctioned before, [the investigation] was a complete surprise. I think I am a decent person, a loyal person.”

Since then The Sun-Herald has spoken to 24 former and current Sony Australia staff members about the culture of bullying and harassment they claim exists at the company. The allegations range from low level bullying and gaslighting through to assault.

Many spoke to The Sun-Herald on the condition of anonymity, primarily because they were afraid of the impact it would have on their careers in the notoriously small Australian music industry. Others signed non-disclosure agreements when they resigned from Sony or were made redundant.

“They’ll stop at nothing to protect their reputation,” says one senior music industry executive, who is familiar with the culture at Sony.

Some said their time at the label left them with post-traumatic stress disorder. “Even talking to you now I am shaking,” one former staff member says.

Sony is renowned for throwing some of the best parties in the local music scene, from private backstage events after gigs to the annual ARIA Awards afterparty held at some of Sydney’s fanciest locations like the Museum of Contemporary Art. The parties are among the hottest tickets in town for the occasional attendee. For staff who are required to attend these events, and often several a week, it can be a different story.

One former employee, who asked to remain anonymous, says the drinking culture at Sony turned her into an alcoholic.

“I wasn’t much of a drinker when I started working there, but you are expected to attend events for the company. Not encouraged: expected,” the former staffer recalls. “You are at these gigs, you are drinking, and if you’re not drinking you’re not a team player. I left in the February and I was in Alcoholics Anonymous in the May.”

A woman who worked at a now defunct music chain also experienced the hard partying ways of Sony. “When we would go out with record labels Sony was the only one who would try to take us to strip clubs. Our relationships with other [labels] just weren’t like that.”

Unorthodox human resources practices at the company aren’t limited to turning a blind eye to heavy drinking at work events. The Sun-Herald has been told of multiple instances where people have been made redundant at Sony, only for their roles to be re-named and then filled by someone new.

One former staff member, who started at Sony on a maternity leave contract, says the role she was covering for was made redundant and the new mother was told her position was no longer available. The maternity leave replacement was then offered a job with the same responsibilities as the new mother’s job, only with a slightly different title. 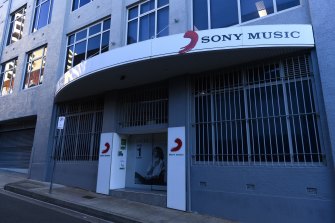 “I had the same job with the same duties and the same salary – there was just a new word in my title,” she recalls.

One woman who spoke on the condition of anonymity says in her experience at Sony senior men were allowed to prey on junior women and get away with it. She says she had consensual sex with a senior Sony executive and was later chastised by Human Resources for “upsetting” the man.

“I think I probably had an expectation that it [sex] would happen again,” she explains.

“I was obviously drunk at a function and talked to him more than he wanted to be talked to by someone as junior as me. Shortly after I had a formal sit down with Human Resources who told me to leave [the senior executive] alone because I was upsetting him.

“She basically told me it will get too hot for me if I didn’t back off.”

After The Sun-Herald revealed the dismissal of Tony Glover, several female staff at Sony were at pains to point out the culture had changed in recent times.

The company has promoted at least eight female staff members in the last twelve months including two women into senior roles: Kate Bonano who now heads up the local publicity team looking after Australian artists, and Sophie McArthur who holds a vice president role. The recent poaching of Sophie Patterson from Spotify has also boosted senior female representation at the company.

The investigation into the workplace culture that began nearly a month ago is ongoing with former and current staff still contacting the anonymous tipline.

Attention now turns to who will replace Handlin at Sony, one of the most powerful jobs in Australian music. Two front runners have emerged: former Sony Music Australia executive Tim Pithouse and Kim Boshier, the managing director of Sony New Zealand.

Pithouse moved to New York in 2018 to head up The Orchard, a subsidiary of Sony Music which specialises in distribution, marketing and sales. He has long been considered Handlin’s heir apparent at Sony Music Australia and The Orchard role formed part of his apprenticeship.

Meanwhile Boshier is seen within Sony as a steady hand with impeccable taste in music and a management style that could heal the fractures within the Australian office.

But as one long term music industry executive said last week: “who would want it now?”

Related posts:
June 26, 2021 Lifestyle Comments Off on What happened after Amy Shark forgot to thank Sony boss Denis Handlin at the ARIAs
Celebrity News:
It Was Love at First Sight When Track Athletes Tara Davis and Hunter Woodhall Met at Age 16
Scooter Braun Officially Files For Divorce From Yael Cohen – & Already Has A Prenup In Place!
OMG! Prince William Is Also Writing a Book After Harry's Memoir News
Courteney Cox: My cooking is a lot better than the restaurants I used to go to
Are Shailene Woodley And Aaron Rodgers Planning Their Wedding?
Recent Posts