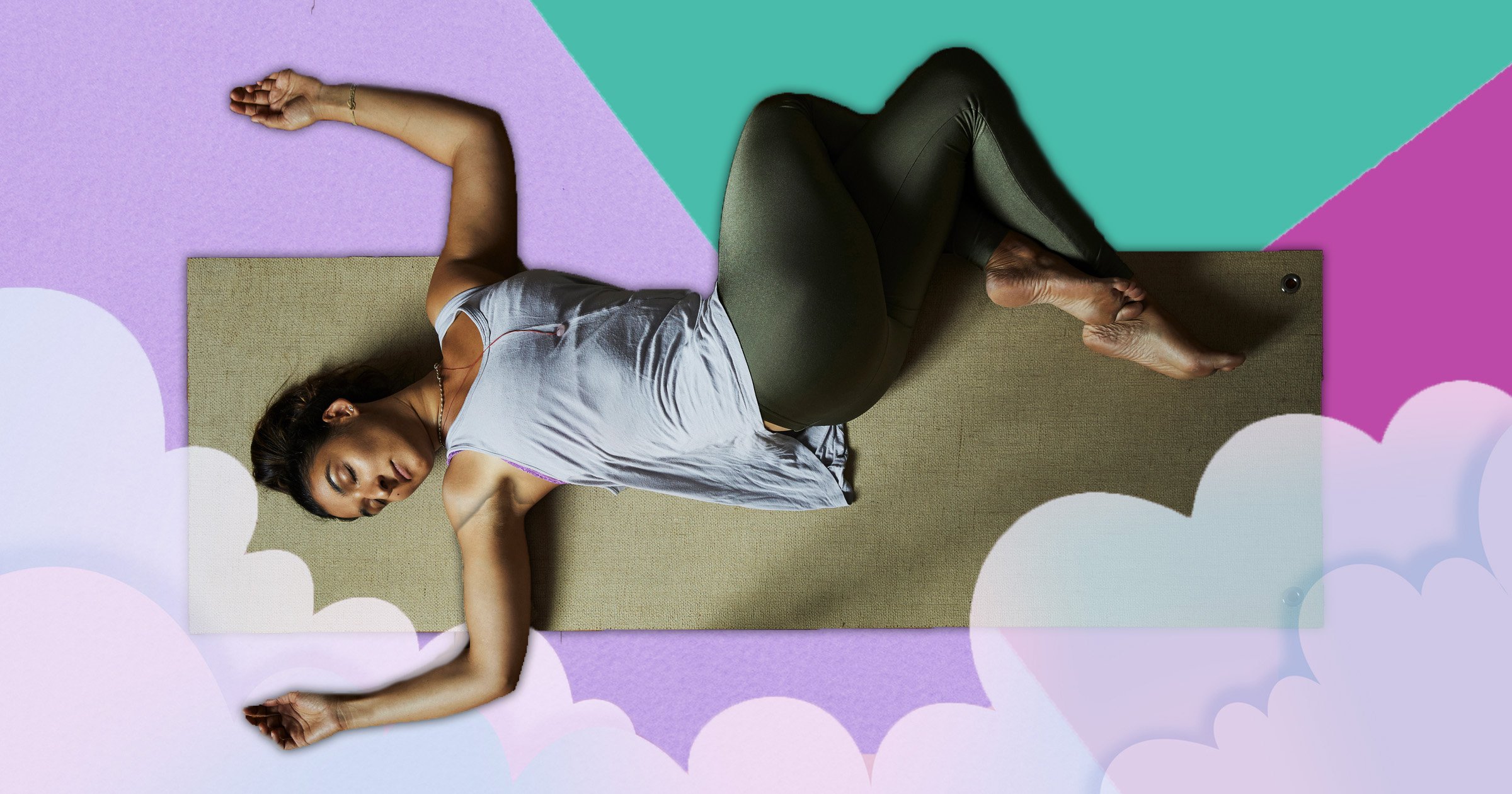 Yin yoga, labelled ‘lazy yoga’ (you spend most of this yoga class lying on your mat – not a dynamic sun salutation in sight), is becoming one of the most requested classes in the city.

As London attempts to return to normal, it seems we are reaching for a movement practice that heals as well as invigorates.

‘Yin yoga is helping us release the trauma and tension of the past two years and find a sense of ease again and people are flocking to these classes,’ says yin teacher Dirish Shaktidas, who runs regular yin yoga sessions at Yogarise studio, in Streatham, London, which now provides daily classes due to the dramatic increase in demand.

It’s the same story, city-wide, with yin classes becoming the most booked class at gyms and studios across the capital since re-opening their doors post pandemic. Why?

‘We are all craving gentle yoga to help restore and nurture ourselves back to health after the constant and persistent stress of the past two years,’ says Paula Hines, whose new book Rest +Calm, about using the power of restorative yoga to heal our lives, launches this week.

Hines became a fan of yin and restorative yoga when she left a career in television over ten years ago and retrained as a yoga teacher.

‘I was burnt out but when I committed to a daily 20-minute practice of savasana (lying still and relaxed on my back) for a year,’ she tells Metro.co.uk. ‘It transformed my health and my life.’

In Covid lockdowns, Hines hosted yin and restorative yoga sessions online. ‘People who were completely new to yoga were signing up,’ she notes. ‘Intuitively, they knew yin yoga would help them through the pandemic.

‘But now they are continuing to practice because it helps them on a daily basis to feel good and less anxious.’

What is yin yoga and how will it help you?

Yin yoga is a slow and therapeutic style of yoga, in contrast to the more dynamic yang styles such as ashtanga or vinyasa, and is mostly done lying down on the mat.

The concept of yin and yang has its roots in Taoism/Daoism, a Chinese religion and philosophy, which states that all things exist as inseparable and contradictory opposites. Yin represents the receiving force, yang the active. Neither pole is superior to the other but a balance between two poles is recommended in order to achieve ‘harmony’.

In yin yoga, postures are mainly passive versus active, held for three to five minutes, encouraging the body to relax into a posture, working deeply into the fascia, the connective tissues of the body.

Yin yoga is known for radically improving your flexibility and releasing any tension that you may be holding. By deep breathing and targeting the fascia, you increase blood flow and circulation which encourages every organ to function properly, helping wounds heal faster and keeping your brain sharp.

‘Even though it might appear as though nothing much is happening, there is deep rejuvenation taking placing underneath the surface in a way that zoning out in front of Netflix or watching a back to back box does not achieve,’ says Hines.

Working on your inner energy pathways

Yin yoga is not just a feel-good exercise or relaxation class though, says Sarah Powers, one of the world’s best known and most respected yin yoga teachers and author of Lit from Within.

‘I often call Yin yoga a needle-less acupuncture session,’ she says. ‘Our body’s energy flow can densify, calcify, or stagnate when we don’t move our bodies outside of our more habitual ranges of motion.

‘Obviously, this is why we do yoga postures. But coming into a pose in a consciously slow yin way and staying for many minutes at a time helps us go into deeper energy corridors within and helps us creates a space to ventilate any kind of inner stuckness.

‘Yin teaches us to pause and to soften, to listen to ourselves and to observe and be mindful of our feelings and observe the physical and emotional resistances in our bodies.

‘As soon as we start observing versus resisting, our inner landscape begins to shift and morph. We are no longer stuck.’

Post-Covid, when the world is re-evaluating and reassessing our ‘yang ways’ of working too long and too hard, yin invites you to stop doing and start being, stop pushing and start opening up to new possibilities.

Powers suggests that we combine our yoga practice with journaling and powerful questions like: What if I didn’t tell myself that I wasn’t enough? What do I know about myself that only a wise person would see in me?

Shaktidas agrees. ‘We heal by slowing down and reconnecting to our sense of self.’

It can also help us process all the information that is being thrown at us, he suggests. In a week where we are been being bombarded by the 24/7 news about the war in Ukraine, it may be a good time to explore new ways of dealing with the constant stimuli.

‘Practising yin yoga quietens the noise and helps you release anxiety,’ he says.

Sarah Alice Lee was a photographer in New Zealand when she took her first yin yoga class: ‘I’m not being overdramatic, but yin yoga quite literally saved my life,’ she tells us. ‘I was living in New Zealand when the Christchurch Earthquakes of 2010 and 2011 hit and I became highly stressed and my physical health and mental health declined rapidly.

‘No amount of running or consumption of wine seemed to achieve a state of relaxation or equilibrium in my body that I was so desperately needing.

Lee was diagnosed with depression and prescribed antidepressants but felt like she ‘was surviving rather than living’. Yin yoga helped her turn her life around.

She says: ‘Rather than keeping busy, trying to sweep my emotions and stresses under the rug in order to get through each day, I gave myself permission to be still, to stop running, stop with the distractions, stop the numbing and allow myself to feel, truly connected to me.’

Lee found the process so transformative that she trained as a yoga teacher, moved back to the UK and now hosts workshops and classes.

‘I didn’t think I was going to change career and become a yoga teacher, but the practice was so transformative that I became evangelical and just want to spread the word,’ she says.

Hines is equally evangelical ‘Yin yoga is about making space and time to come back home to yourself.’