Wildlife traffickers are openly selling critically endangered pangolins and their scales on Facebook, setting up profiles for fake petting zoos that direct potential buyers to private WhatsApp numbers where deals are made.

In an investigation published Wednesday, the Tech Transparency Project found half a dozen public posts selling pangolin scales simply by searching for the name of the animal written in Vietnamese. Many of the pages offered pangolin scales, which are used in traditional Chinese medicine. The Tech Transparency Project is a research initiative by the Campaign for Accountability, a nonpartisan, nonprofit watchdog organization.

“The pangolin is the world’s most trafficked animal,” the Tech Transparency Project’s executive director, Daniel Stevens, told BuzzFeed News. “And it’s still easy to find these animals to buy on Facebook.”

The main way traffickers sell pangolins on Facebook is by creating fake listings for zoos. On three pages viewed by BuzzFeed News, the moderator had listed the profile as a zoo or animal rescue service, even though the pages had titles like “Pangolin Scales for Sale in Vietnam” and “Rhino Horns and Pangolin scales for sale in China.” Many of the pages also direct potential buyers toward WhatsApp numbers.

“We discretely hunt and sell Rhino Horn and pangolin scales contact us for more information on purchase, WhatsApp me,” one page read.

Sarah Uhlemann, international program director and senior attorney for the Center for Biological Diversity, told BuzzFeed News she wasn’t surprised that the Tech Transparency Project’s researchers were able to find pangolins on Facebook. Uhlemann said she was able to find online vendors the same way that the Tech Transparency Project team did: by googling the word “pangolin” in simplified Mandarin.

“It’s not that hard to find,” she said. “I would say that the Vietnamese link is not surprising to me.”

Uhlemann said that the Vietnamese Facebook users selling pangolin scales are probably connected to a larger network that traffics African pangolins from countries like Nigeria to Vietnam and then into China. “We’re seeing a lot of scales coming out of Nigeria and usually shipped with ivory,” she said. According to Uhlemann, the pangolin scales are typically powdered, combined with other Chinese herbal medicines, and then sold in a mixture that can be consumed in a pill; it is touted for a variety of uses, including lactation, skin disease, and palsy.

And demand for pangolins has not diminished despite the animal’s population being decimated in China and are labeled as endangered or critically endangered around the world. According to an April report from the United Nations Office on Drugs and Crime, seizures of illegally hunted pangolins from Africa and intended for Asian markets have increased tenfold since 2014.

“One operation last April seized 25 tons of African pangolin scales — representing an estimated 50,000 dead pangolins — with a market value of some $7 million,” the UN office’s executive director, Ghada Waly, said in the report. “Between 2014 and 2018, the equivalent of 370,000 pangolins were seized globally.” 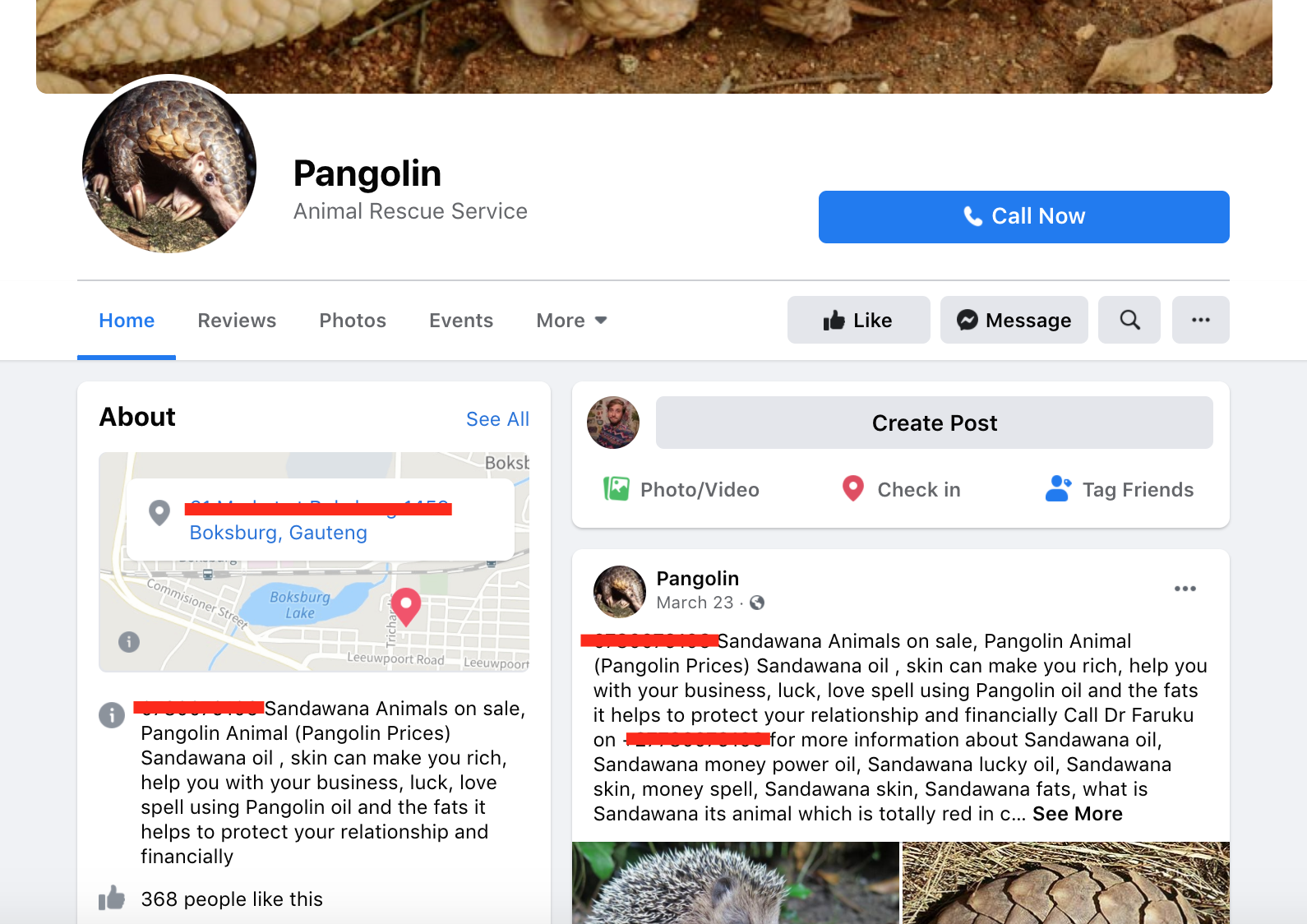 The Tech Transparency Project discovered another pangolin trafficker who created a Facebook event page in South Africa. The event, which was viewed by BuzzFeed News, was titled, “Sandawana and Pangolin Animals on Sale Worls [sic] Wide.” The event included a WhatsApp number and advertised a “love spell using Pangolin oil.”

Two of the pages discovered by the Tech Transparency Report were taken down by Facebook after BuzzFeed News contacted the platform for comment.

Facebook said it doesn’t tolerate the illegal trading of endangered wildlife and their parts on our platforms and will take down pages or events and associated accounts when they are found to violate these policies. The site’s moderators use a combination of technology, reports from NGO partners, reports from our community, and human review to detect and remove violating content.

Because pangolin trafficking pages are directing potential clients to encrypted WhatsApp channels, it’s hard to estimate the size of these operations. The most popular of these pages had 336 followers as of Wednesday. The Tech Transparency Project also found a still-active public post that advertised pangolin shells, which a Vietnamese herbal medicine retailer published last June. It had 100 comments from interested buyers.

According to Richard Thomas, a spokesperson for Traffic, a nongovernmental organization that tracks the global trade of wild animals, Facebook isn’t the most common way to traffic pangolins, but it can be used to advertise the animals’ scales.

“Most pangolin trafficking tends to be large shipments of scales, mainly moving between Africa and Asia,” Thomas told BuzzFeed News. “Social media platforms aren’t a common means used for pangolin trafficking, but if someone has got a pangolin or pangolin parts for sale, it might be one of the ways they use to advertise that.” 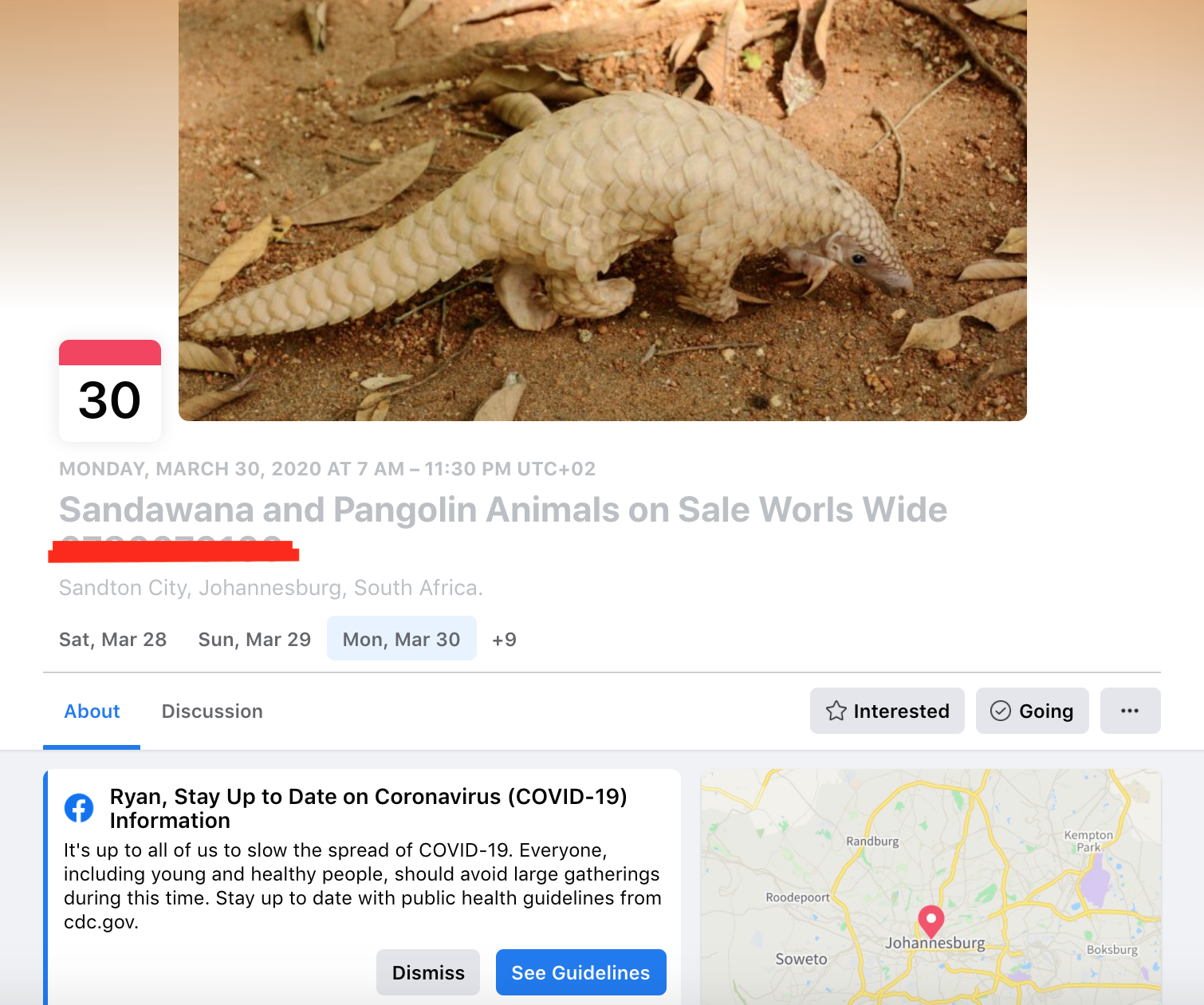 Facebook is an active member of the Coalition to End Wildlife Trafficking Online, which brings together companies from across the world in partnership with wildlife groups like Traffic, the World Wide Fund for Nature, and the International Fund for Animal Welfare. Coalition members have removed or blocked over 3 million listings for endangered and threatened species and associated products from their online platforms.

However, in a secret complaint filed in 2018 with the Securities and Exchange Commission, a group of wildlife advocates accused the platform of serving advertisements on pages selling body parts of endangered animals, including elephant ivory, rhino horns, and tiger teeth.

One of the biggest debates in the world right now — which animal the novel coronavirus originated from — also happens to implicate pangolins.

COVID-19, the disease caused by the novel coronavirus, is thought to be zoonotic, originating in animals and jumping to humans. COVID-19’s genetic similarity to RaTG13, a virus discovered in 2013 in bats in China’s Yunnan province, has led many scientists to suggest COVID-19 started in bats and passed to an intermediary animal before infecting humans. What makes the scaly animals an intermediary suspect is the similarity between proteins in a coronavirus found in Malayan pangolins’ lungs and the proteins in COVID-19

Vincent Racaniello, a professor of microbiology and immunology at Columbia University and host of the podcast This Week in Virology, told BuzzFeed News he doubted pangolins were the host.

“These viruses originated in bats. How they got into people, we don’t know,” he said. “The remaining question is how it got to people, but that will require more wildlife sampling.”

“Our goal here is to show how big of a problem this is,” Stevens said. “It’s really only public shaming that will make a difference to them.”

Related posts:
May 6, 2020 Lifestyle Comments Off on Wildlife Traffickers Are Setting Up Fake Zoos On Facebook To Sell The Scales Of Endangered Pangolins
Celebrity News:
Mr Motivator held at gunpoint in terrifying home invasion in Jamaica
Dianne Buswell ‘would love to be with Joe forever’ as she talks marriage plans
Johnny Carson Said His Final Goodnight as Host of ‘The Tonight Show’ 30 Years Ago
Peter Pan's Arc in 'Rescue Rangers' Compared to Bobby Driscoll Tragedy
Travis Barker LICKS Kourtney Kardashian's forehead in Italy
Recent Posts