Australia’s most successful playwright by a long stretch, David Williamson, has written 55 plays over the last 50 years. He’s had a career of unprecedented prominence and longevity, and his enduring power to attract a mainstage audience rests on his acumen as a popular chronicler and satirist of middle-class Australian life; his ability to hold a mirror to his own ‘tribe’.

The MTC celebrates Williamson’s stage jubilee with a production of Emerald City. This play must have felt daring when it premiered at the STC back in 1987, when it would have reflected back to the glitterati of Sydney’s entertainment industry just how venal, grasping, narcissistic and compromised they all were (while reassuring them, shrewdly, that they weren’t bad people deep down). 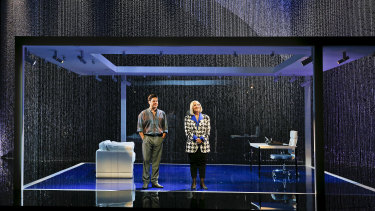 What does it look like in 2020? Well, instant classics tend to date quickly, so it’s curious to see which perspectives feel antique, and which remain surprisingly current.

One thing that hasn’t changed much is the lot of the Australian artist.

High-flying screenwriter Colin (Jason Klarwein) and his publisher wife Kate (Nadine Garner) move from Melbourne to Sydney lured by bright lights and ambition, and for Colin, the anxiety lurking behind his drive is a deep horror of the humiliation and the poverty that attend artistic pursuit.

The idea that even a talented artist might end up, as Henry Lawson did, broke on the streets of Sydney, with only a few “yellowing crits” to show for their trouble, appals him. Selling his soul for commercial success seems preferable – until, that is, he abandons his veteran producer Elaine (Marg Downey) to make a Faustian pact with the chauvinistic shyster Mike (Rhys Muldoon).

Sam Strong’s production is designed to suggest the vacuous glamour of Sydney, with monumental glitz framing performances that are nimbly inhabited at a more human scale.

The casting is excellent. The rapport between Garner and Klarwein wrings as much nuance and brio as it can from the script. Muldoon’s blokey charlatan is played with maximum charm and awfulness; Downey memorably stencils a blue-blooded operator; Hind brings complexity to what could easily have been a superficial role.

Williamson’s exploration of the struggle between art and money, between ideals and pragmatism is a well-constructed entertainment from an intelligent playwright who knows his audience, even if it doesn’t really dig deep enough for the satire to bite.