A woman has died in custody after she was found unresponsive in her cell at the Ballarat police station.

Victoria Police said the 50-year-old Ballarat woman was taken into custody on Thursday and was found unresponsive in her cell ahead of a court appearance on Friday. 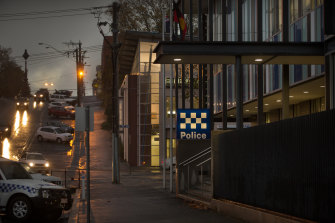 “She was found unresponsive when police attended her cell to escort her to court,” police said in a statement.

Paramedics were called about 9.30am on Friday, an Ambulance Victoria spokeswoman said.

However, they were unable to revive the woman, who died a short time later, police said.

As is standard protocol, homicide squad detectives will investigate her death with oversight from professional standards command.

The woman’s death comes months after a 32-year-old man died while he was being arrested, in an apparent medical episode, on High Street in Cranbourne on April 27 after he was seen walking in traffic.

Separately, an Indigenous man died in custody at Ravenhall Correctional Centre on March 7, after being found unresponsive in his cell two days after a suspected stroke. He was one of four Indigenous people to die in custody in Australia in March.

Our Breaking News Alert will notify you of significant breaking news when it happens. Get it here.