Woman, 44, who was embarrassed by her grey hair reveals her face ‘ballooned’ to DOUBLE its size after she used £5 Schwarzkopf box dye at home

A woman who was embarrassed by her grey hair has revealed how an allergic reaction to Schwarzkopf dye made her face ‘balloon’ to double its normal size.

Leonie Leighton, from Belper, Derbyshire, decided to colour her locks with the brand’s £5 Cosmic Blue box dye in May.

As it was her first time dying her hair, the 44-year-old did a patch test at a local salon and waited a week before using the high street brand.

Despite not having any reaction to the professional dye, Leonie discovered she was allergic to the chemical Para-phenylenediamine (PPD) commonly found in box dyes, which caused her face and eyes to swell shut.

After two hospital visits and a course of steroids, Leonie says it is still uncomfortable to wash her hair five months later. 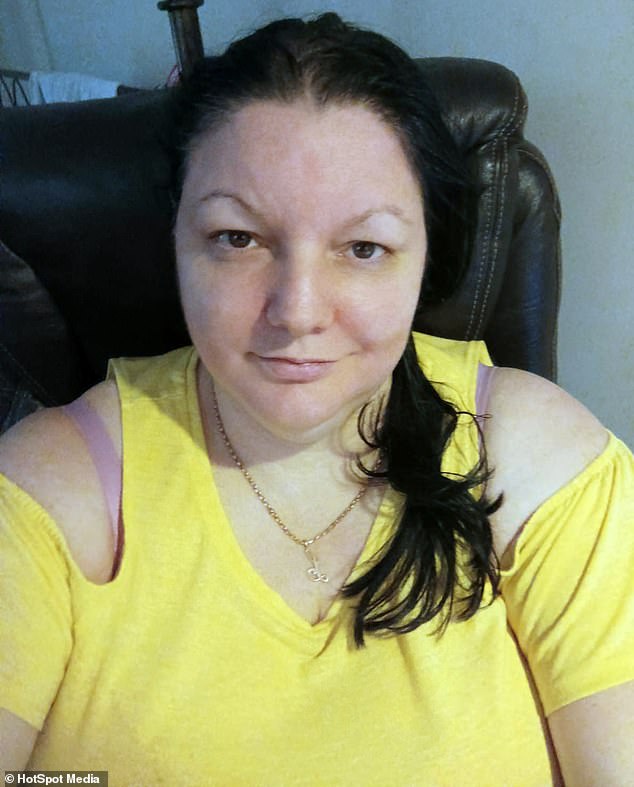 Leonie Leighton, 44, from Derbyshire, bought the £5 home dye kit in May to cover her greys. Pictured, Leonie today since the reaction to the hair dye has calmed 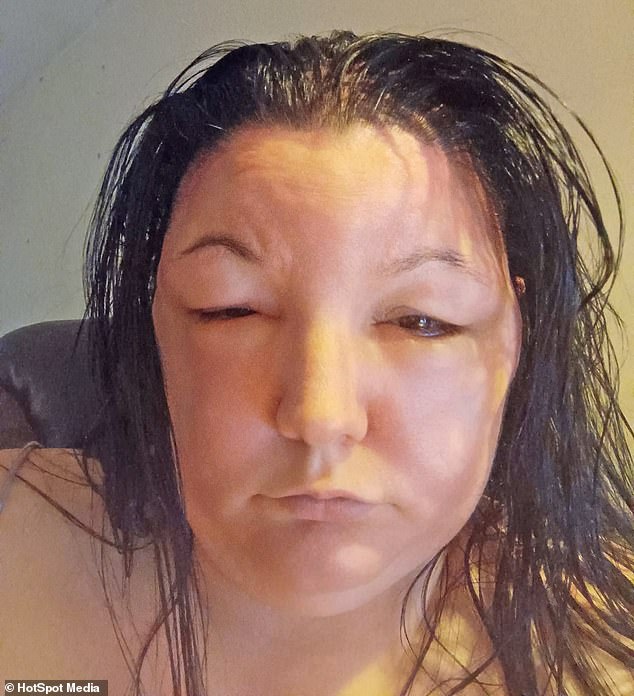 Leonie’s allergic reaction to the chemical Para-phenylenediamine (PPD) caused her face to double in size and eyes to swell shut, as seen above

Explaining what made her reach for the dye in the first place, Leonie said: ‘Friends would say how I should cover it up, and customers where I worked would often tell me that I needed to dye my hair.

‘One said I needed to, ‘sort my hair out and cover up my grey’, it was horrible. It was starting to get me down, so I decided to dye it to try and boost my confidence.’

Once she made the decision, Leonie went to a local hairdresser to get a patch test done and claimed she didn’t have any kind of reaction after a week.

But 30 minutes after she’d used the £5 kit, Leonie says her face started to tingle.

She continued: ‘I thought this was normal, so didn’t think anything more of it. But the next day, my face was so itchy and uncomfortable and a red rash appeared on my head.

‘Then it started to swell and I developed blisters and burns on my neck.’ 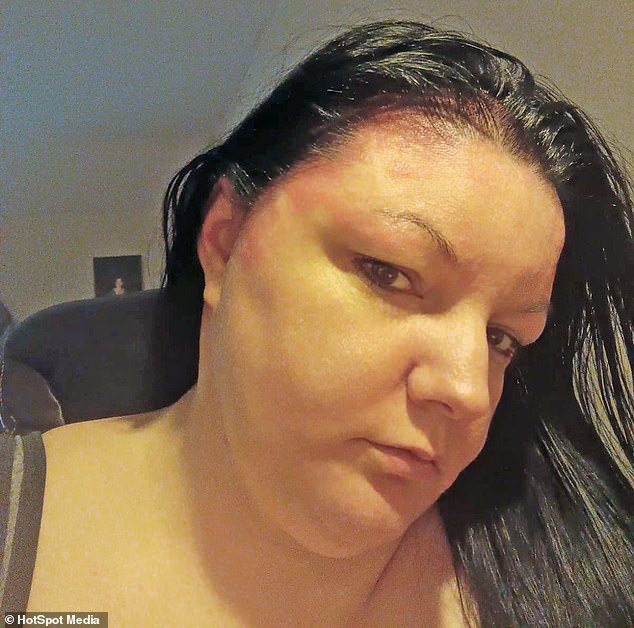 A red rash around her scalp was the first symptom Leonie developed after she dyed her hair, as seen in the photograph above 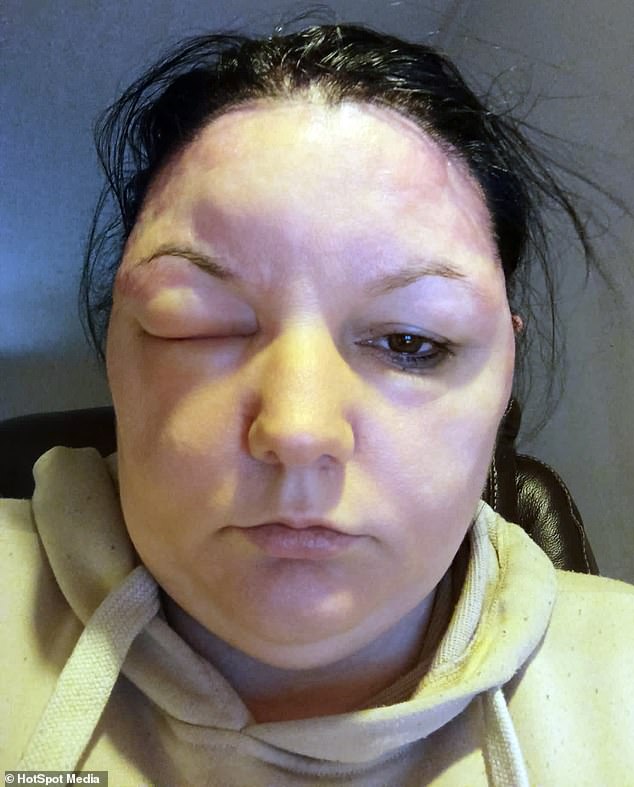 Leonie continued to react to the hair dye and could feel her face swelling more each day. She eventually had to go to the hospital for treatment. Pictured, after going to A&E for the first time 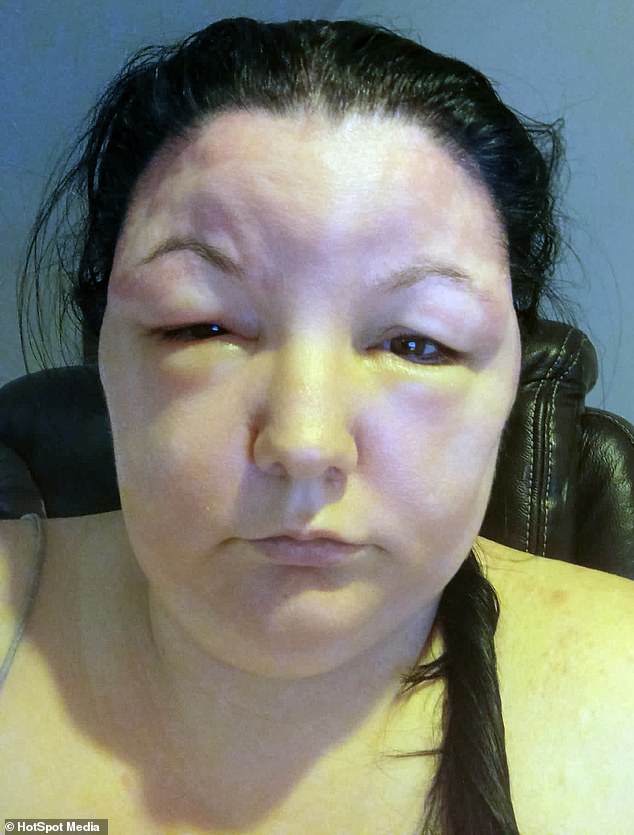 The swelling around Leonie’s eyes only started to go down when she was given a higher dose of steroids. Leonie pictured after her second trip to A&E 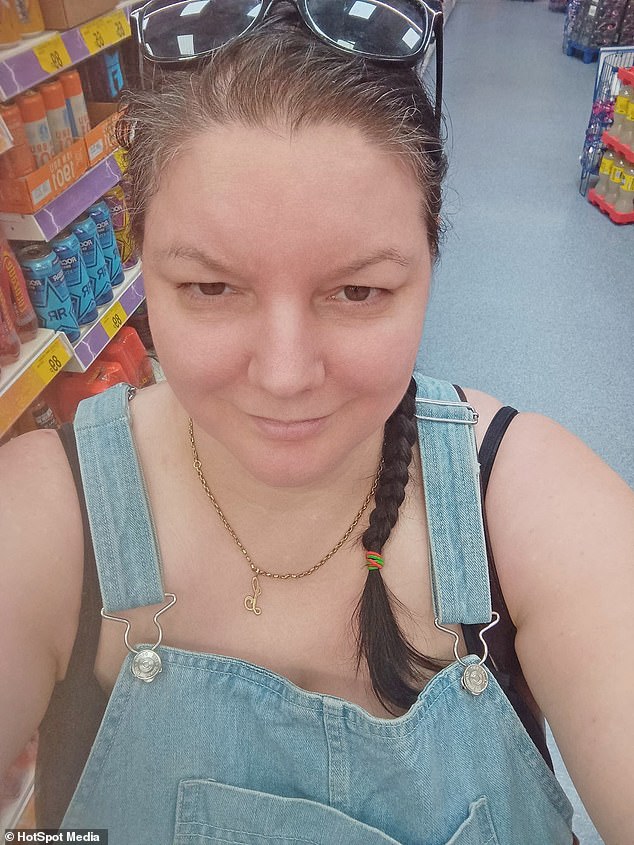 Leonie says she’s now embracing her grey hairs which are slowly starting to come back through. Pictured this week, since her recovery from the hair dye disaster

At this point, Leonie got in a car to A&E where doctors at King’s Mill Hospital in Sutton-in-Ashfield told her that she’d had a reaction to PPD.

Leonie was then sent home with a dose of steroids – but found they had little affect on her symptoms.

If you’re allergic to PPD, your scalp and face may feel itchy and start to swell.

PPD may also trigger symptoms throughout your body, such as itching, a nettle rash and generally feeling ill.

These symptoms may not develop until hours, or even days, later.

Hair dyes containing PPD are safe to use, providing safety instructions are followed. These products are strictly regulated and there’s a maximum limit to the amount of PPD the product can contain.

If you ignore the safety instructions that come with the dye, you could put yourself at risk of a serious reaction

She said: ‘I could feel and see my face swelling more and more as the days went on. I was in so much pain.

‘When I saw myself in the mirror, I couldn’t believe what I looked like.

‘After 48 hours, I rushed myself back to A&E. By this point, my face had ballooned to twice its size and I couldn’t see.

‘When staff saw what I looked like, they raced me straight through to see a doctor.’

As well as giving her a higher dose of steroids, medical staff were concerned that Leonie was at risk of going into anaphylactic shock and gave her an EpiPen.

She said: ‘Doctors said that it was a good thing that I went back to A&E when I did because my airways could have closed up.

‘But when my five-day dose of steroids ended, my head was still so itchy. I had to keep dunking it into a cold bath to soothe it. It was so sore.’

However, she claims she still struggles with redness and blotchiness each time she washes her hair.

Leonie added: ‘Whilst I loved the colour that I used, I can’t wait for it to come completely out of my hair.

‘I dyed my hair to make myself feel better after receiving horrible comments from people whose opinions shouldn’t have mattered.

‘But it just wasn’t worth it and I’m never going to dye my hair again. Instead, I’m accepting my natural self.’