Gardeners World’s Adam Frost was on hand to help viewers plant and grow their own potatoes in a 2020 clip of the show. The landscape designer told those watching at home the three different categories of potatoes, what each seed potato produces and how best to chit them, as well as how to grow a crop if you haven’t got a garden. One thing Adam was keen to get across was the temperature of the soil and when to know to “back off” and not be eager to plant the chitted potatoes.

“But actually, in reality, it’s about understanding your soil. And if your soil is really wet, back off, don’t get them in,” he added.

“These are ultimately my first earlies, these will be my first potatoes that I will put in the ground. 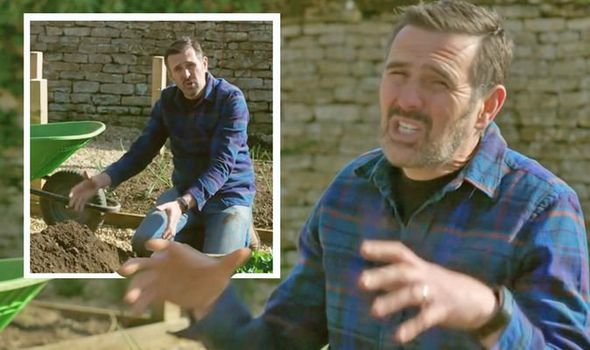 “The first thing I’m going to do is dig a trench… as far as the depth of the trench, I tend to go about eight inches – you will see later one when I’m filling them in, the reason why I do it,” Adam continued.

“As I said, these are an easy crop to go, but you don’t even need a garden! If you’ve got a balcony, you could put them in a bag or a pot, just make sure if you’re putting them in a bag, there’s a couple of little holes in the bottom so they can drain.

“And it’s a bag so the light can’t get through to the potatoes.

“You’ll find other people put manure in their trench, I tend to just use chicken pellets and I just throw some through the bottom. 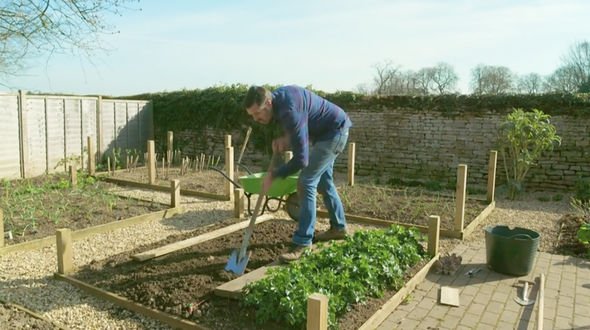 “Potatoes are grown from special seed potatoes, they are just like the potatoes that you buy at the supermarket but, they are guaranteed to be free from disease,” he revealed.

“You might see here, look, that they’ve got little growths coming out the top of them.

“This is because I’ve actually chitted the potatoes – not chipped alright! Chitted, you can chip them later,” the presenter joked.

“To do that, you put them in egg boxes, put them in a light windowsill and you’ll get these shoots. 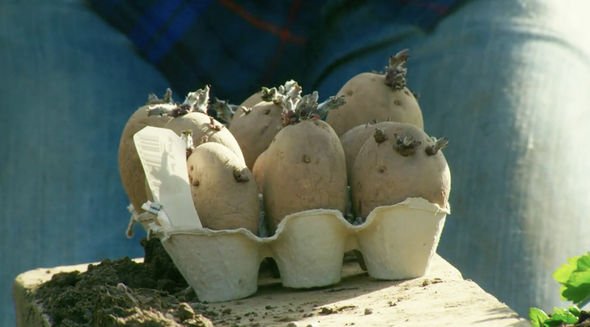 “But, that said, if you can’t chit your potatoes, it is not the end of the world. And, especially when you get to maincrop potatoes, it really doesn’t matter.

“These are Red Duke York potatoes, an old heritage potato that with this soil, tastes awesome!

“What I’m going to do is put these about a foot apart with those lovely little chits pointing upwards.

“As you get into the main crop, that foot, turns into a foot and a half, because the potato is going to have more time in the ground and you’re going to end up with larger potatoes,” he carried on. 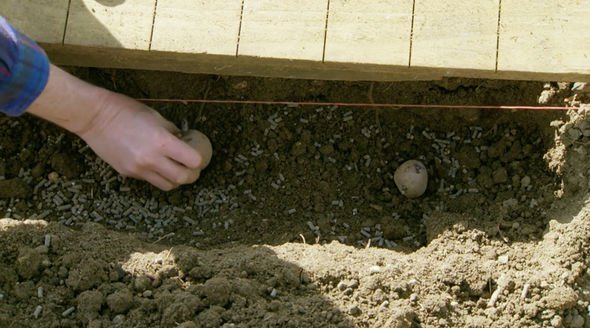 “With your early crops, a lot of them are ultimately new potatoes, they are smaller so they don’t need so much room.

“The next thing is to start filling the trench! But all I’m going to do at this point is put about four inches on top, so I’m going to leave some of the soil and not fill the trench all the way in,” Adam finished.

As for what’s in store in tonight’s Gardeners’ World, Arit Anderson and Frances Tophill introduce a special show.

Viewers will tune in to see them present from Wakehurst, Kew’s botanic garden in Sussex.

They not only explore the gardens but also meet the gardeners, joining in on their planting projects and finding out more about the UK’s largest conservation project, the Millennium Seed Bank.

Related posts:
June 4, 2021 TV and Movies Comments Off on Adam Frost orders Gardeners’ World viewers to ‘back off’ when planting potatoes
Celebrity News:
Princess Charlene will not return to Monaco for her tenth wedding anniversary
'Heroes': The Original Pilot Was 'Too Controversial' to Air
Kim Kardashians Daughter Chicago Gets Caught Trying To Sneak Off With Mommys Designer Bags
Britney Spears wants freedom: What is conservatorship? Why would someone need a conservator?
Snooki Sounds Off on Angelina Pivarnick & Chris Larangeira: Theyre So Messed Up!
Recent Posts