Cam model for Off The Record 28-year-old Polly spoke to Express.co.uk about how she feels Adult Material is “damaging” for the adult entertainment industry.

She explained: “So when I saw the advert, I was really excited for it.

“It looked like it was going to be really empowering, it was going to show women in the industry in a good light and sort of battle against stereotypes and challenge the social norms and it didn’t.

“It ended up being quite a dark story and I get that they [the writers] wanted it to be a drama and they still had a point behind it but I feel like the execution was actually quite damaging on people in the industry.”

“The bit that really made me angry was that one of the younger characters, she ended up going into escorting and even the main character who’s in porn…is like disgusted at it and she has to be on drugs all the time to escort.

“I think that’s a really toxic point of view on escorting, none of the escorts I know are like that or work like that.

“I found myself very annoyed at all the characters because they were all really thick and they had no other option than to be in sex work.

“They were all very competitive with each other and bitchy which I haven’t found at all and it was very unrealistic of my experience.” 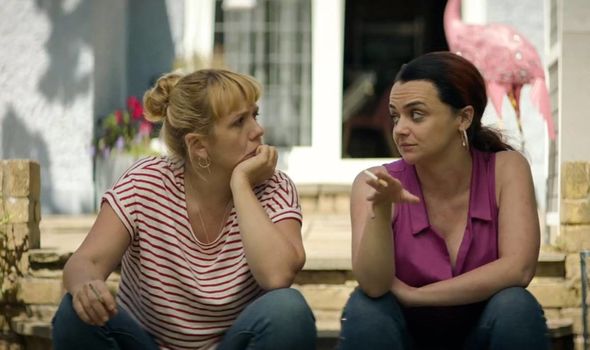 Fellow Off The Record cam model Sophie, 21, joined the industry a few months ago and says she had mix feelings towards Adult Material.

While she questioned some of the stereotypes in the series, she also welcomed a show putting the sex industry in the spotlight.

Sophie said: “I think it’s really important to have these kind of topics on TV and in the media full stop to normalise them a bit more, because I’m a pretty bog standard normal person and I always thought the industry was secretive and dirty and weird.

“But actually…most of the people are mums, they work in offices, there’s no one who’s really out there.

“So I liked the fact there was a series on a big channel which would show the life of someone like that.”

Sophie further explained: “I was one of those people, before I started doing this, I thought ‘I can’t do this or you’ll get into drugs or you’ll end up owing money…but in reality it’s been much safer than I can imagine.

“Whereas I reckon more vanilla people who don’t know the industry very well might watch that show and be like ‘this has happened to her, of course it has.’

“But overall, I am just happy that something like that was shown on TV as there’s always been documentaries about this industry but they’ll be on Vice or YouTube.

“I think regardless when it did get a bit dramatic…they were handled really well and they weren’t insensitive at all.

“I do think it perpetuated some of the stereotypes that do come with this industry but regardless, most people would be happy to see that industry on mainstream TV, even if it did perpetuate it, it normalised it a bit as well.”

While Polly felt elements of the show such as juggling every day life with work and “constantly being on social media” was realistic, the rest of the series left a lot to be desired.

Polly added: “They didn’t spend much time getting to know the people, they just went to visit the [production] sets.

“For me, it was almost the way they made the characters people you couldn’t respect and there’s enough of that stigma in these industry anyway, we don’t need that pushed anymore.”

Adult Material is available to watch on All4.

Related posts:
October 18, 2020 TV and Movies Comments Off on Adult Material: What do sex workers really think of Channel 4’s Adult Material?
Celebrity News:
Kristen Bell Explains Why She Quit Using Recreational Marijuana 2 Years Ago — 'I'm Always Around My Children'
Chris Packham’s stepdaughter Megan McCubbin admits ‘worries’ for him after ‘death threats’
'Dancing With the Stars': ET Will Be Live Blogging Week 6!
Ice Cube Defends Advising Trump Administration On Plan To Help Black Americans
Karamo on Missing His Queer Eye Crew and the Music That's Gotten Him Through the Pandemic
Recent Posts
This website uses cookies to improve your user experience and to provide you with advertisements that are relevant to your interests. By continuing to browse the site you are agreeing to our use of cookies.Ok