Showtime Documentary Films announced today a new feature-length film from acclaimed Emmy-winning documentarian Stanley Nelson about the Attica Prison Uprising. “Attica” will detail the five-day prison rebellion that took place in the fall of 1971 in upstate New York, which remains the largest and deadliest the country has ever witnessed. The film is set to premiere on Showtime in 2021, the 50th anniversary of the uprising.

The official synopsis reads: “More than a simple recounting of the five days of rebellion, ‘Attica’ will also offer a broader understanding of the Attica tragedy in the crosscurrents of politics, race, power and punishment during the early 1970s. Through expert voices and archival images of urban and suburban life, the film explores the tensions between a young, radicalized population of mostly Black and Latino inmates, and correctional officers from a predominately white company town, where the Attica prison was the primary employer for generations of families. ‘Attica’ examines inmates’ demands for recognition of their humanity at the culmination of a moment where racial justice activists embraced prisoner rights as an extension of their fight for civil rights.”

Nelson is an Emmy-winning documentarian, for his projects “Freedom Riders” and “The Murder of Emmett Till.” His most recent feature, “Miles Davis: Birth of the Cool,” premiered at the 2019 Sundance Film Festival. Nelson is also the recipient of a MacArthur Fellowship, otherwise known as the “genius” grant.

“‘Attica’ is a film I’ve been itching to make for a very long time. It’s a dramatic story, with so many great voices that have not been heard,” said Nelson in a press release. “The uprising and its aftermath shaped the present in ways I think will be surprising to an audience.” 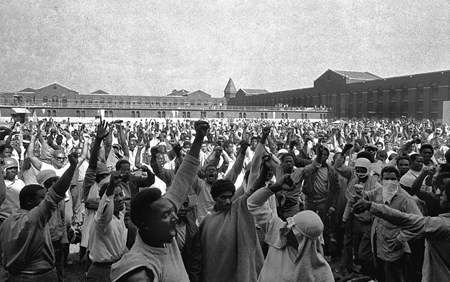 Dr. Heather Ann Thompson, the Pulitzer Prize- and Bancroft Prize-winning author of “Blood in the Water: The Attica Prison Uprising of 1971 and Its Legacy,” will serve as the lead historical consultant on the project.

“Few single words in our nation’s history conjure more powerful emotions than ‘Attica’, especially at the intersection of race and our prison system,” said Vinnie Malhotra, Showtime VP of Nonfiction Programming. “And no filmmaker is better suited to make sense of those five days in America’s history than Stanley Nelson. We are honored and excited to be working with a filmmaker of Stanley’s caliber on telling a story that’s just as relevant fifty years later.”

Related posts:
June 8, 2020 TV and Movies Comments Off on Attica Prison Uprising Film in the Works From Emmy-Winning Documentarian Stanley Nelson
Celebrity News:
Alicia Keys Teams Up with E.l.f. Beauty for New Lifestyle Beauty Brand!
Joey King on Jacob Elordi's Claim He Didn't Watch 'Kissing Booth 2'
Jennifer Garner Spotted With Bradley Cooper and His Kid Amid Split Rumors With Boyfriend
Fabolous and T.I. Blasted on Social Media for Revealing Record Labels Insisted They Hide Their Wives and Families
'General Hospital': Wes Ramsey Had a Crush on Laura Wright Long Before They Started Dating
Recent Posts
This website uses cookies to improve your user experience and to provide you with advertisements that are relevant to your interests. By continuing to browse the site you are agreeing to our use of cookies.Ok