Clare Crawley is the next Bachelorette! And if your response to that statement is still “I’m sorry, whomst?” take a deep breath and clickity-click the upcoming link because we broke down exactly who the Bachelor Nation veteran is and why you should definitely be excited for her season. TL;DR: Clare Crawley has been on Bachelor franchise shows four freakin’ times—and she’s made a lot of money along the way. Here’s a deep dive into her net worth and exactly what she stands to make as ABC’s newest Bachelorette.

Thirty-eight-year-old Clare started her tenure in Bachelor Nation on Juan Pablo’s season of The Bachelor. To be clear, she made *no* money from this gig—in fact, Bachelor contestants usually have to spend money to appear on the show thanks to paying for their own wardrobe. Like, Jillian Harris said she threw down $8,000 on clothing after re-mortgaging her damn house. In other words, appearing on The Bachelor was probably a net loss for our girl.

Clare went on to star in two seasons of Bachelor in Paradise, which cast members do earn money for. Not a lot of money, but considering the show is basically a paid summer vacation, it’s a pretty sweet deal. According to Reality Steve back in 2016, payment for BiP “varies” and some contestants get paid “per day they are there,” while some get paid “per episode they’re on,” and some get paid “a flat rate.”

Reality Steve also confirmed that the range is “anywhere from about $7,000–$15,000 total.” Considering Clare was one of Juan Pablo’s finalists and a pretty big name at the time, let’s assume she made closer to $15K—even though she wasn’t in Paradise that long.

Most recently, Clare was on Bachelor Winter Games—and even got engaged on the show! Unfortunately, there doesn’t seem to be any reporting on how much contestants got paid…although it seems safe to assume they made about as much as the cast of Bachelor in Paradise? 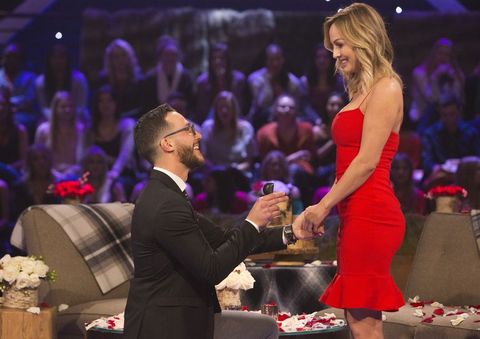 Okay, so there’s actually a ton of info out there on what the Bachelorette gets paid. Show expert Amy Kaufman said in her 2018 book Bachelor Nation that it’s “incredibly rare for someone to make less than six figures,” which means Clare is looking at a decent paycheck. In fact, it’s possible she’s making even more since Emily Maynard reportedly negotiated herself a whopping $250,000 for Season 8.

Let’s Not Forget Her #SponCon

Clare has 537k followers on Instagram as of writing this article (that number will likely grow once The Bachelorette airs), and she’s been living that #sponcon life for a long time. Here she is promoting mattresses:

Summers in Sacramento are no joke when you have two little toasters in bed next to you! That’s why I chose to upgrade and go with the @tempurpedic #tempurbreeze Lux breeze mattress that stays up to 8 degrees cooler than normal mattresses and doesn’t transfer weight with these pups- That way I can get a full night of deep sleep! #ad

So recently I found the best solution to help with taking vitamins. I am definitely one of those people that struggle to remember to take them! (I buy all the bottles, get all hopeful, then overwhelmed with with which ones to take, then skip a day, then it’s game over and the whole bottle expires) •• that’s why it’s perfect when @careofvitamins sends the little daily packs filled with vitamins that are selected personally for me based on my health and diet needs. You can take a quick quiz on their site that tells you exactly what you’re missing, and they send an easy pre-packed monthly supply personalized for what you need! Check out the site, take the quiz and get your pack straight to your door! Use my code Clare for 25% off your first order! #ad

You know it's almost ? fall when the coffee shops + Greenies come out with their Pumpkin Spice everything! I grabbed these for Elbie so he wouldn't feel so left out all PSL season when he tags along. These treats are not only delicious but they help fight plaque and tartar buildup and keep his dragon breath nice and fresh! #GreeniesPUPkinSpice #ad Click the link in my bio to grab them today!

According to Sarah Boyd, founder of the digital influencer agency Simply, reality stars with 100,000 followers make around $1K to $5K per post. Clare’s had way more followers than that for a while, so chances are she’s making several thousand dollars each time she posts a sponsored ad on ye olde IG.

Reminder: She Has a Full-Time Job

Clare’s been a hairstylist for over a decade and works at De Facto Salon. It’s unclear what her yearly pay is, but let’s assume it’s decent! Especially when supplemented with all that ~influencing~.

Work work work work work ? Getting a littttle carried away with the #springcleaning on the product shelves for a bit at the salon! It helps working with my girls that keep it constantly fun + ridiculously entertaining @defactosalon !!?? #gadawgs

So What’s Her Net Worth?

Unclear for now, but based on what we *do* know, Clare is worth at least a few hundred thousand, if not more. And if she has a televised wedding hosted by ABC, she’s looking to cash even more checks.