You’ve heard of the Oscars, but have you heard of the Isaacs? The Isaac Awards, in honor of the great Oscar Isaac, are Showbiz Cheat Sheet’s unique spin on the Academy Awards. However, the Isaac Awards are different from the Oscars in that they celebrate the best movies of 2021 that deserve recognition but will not receive that recognition through Oscar nods. The 2022 Isaac Awards feature five categories: Best Performance, Best Scene-Stealer, Best Crowd-Pleasing Moment, Best Action Sequence, and Fan-Favorite Movie. Voting will be open via this form from March 7-20. Winners will be announced on March 24.

Ghostbusters: Afterlife celebrates the legacy of the franchise. The first Ghostbusters is a beloved classic with hilarious performances from Bill Murray, Dan Aykroyd, Ernie Hudson, and Harold Ramis. Afterlife may not reach the same iconic status as its predecessor but Murray says that it’s “more emotional” than the original.

Afterlife continues the story of the first two films. While Murray did make a cameo appearance in the 2016 Ghostbusters, he was playing a different role. In the climax of Afterlife, Murray, Hudson, and Aykroyd reprise their roles, even gearing up in the iconic suits. The trio returns after Gozer, the villain from the first film, comes back to threaten the world again.

The gang once again wields their proton packs, but Murray says this was more physically grueling than it appeared. In a January 2022 appearance on The View, Murray spoke about the difficulty of going to the ground and getting back up while wearing the packs.

“Physically, that pack is very heavy,” Murray explained. “For some reason, the script ends up throwing us down on the ground all the time, so we have to get up with the pack. It’s not so much the getting down, it’s getting back up. It kills you.”

Murray says this sequel is ‘more emotional’ than the original 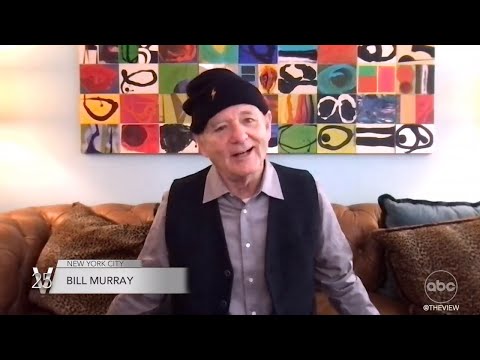 While Afterlife does have plenty of reference to the original Ghostbusters, the most emotional moment features a tribute to the late Ramis. Ramis died in 2014 and his character, Egon Spengler, dies at the beginning of the film. He then appears at the end in ghost form, assisting his granddaughter, McKenna Grace, and the rest of the team with defeating Gozer.

Jason Reitman, whose dad, Ivan Reitman, directed the first movie, dedicated the film to Ramis, and handled this tribute with Grace. Murray praised his co-star and Reitman while also sharing that he believes this movie to be “more emotional” than the original.

“Mckenna was a doll. She was really great and the director Jason Reitman, the son of the original director Ivan, he did a really nice job, and he made a really good movie,” Murray told The View. “It was different than the ones that we made, but it was good. It was much more emotional than ours were, and it was a success as a film. I was happy for him.”

How does ‘Afterlife’ compare to the original?

While Afterlife was a success at the box office, critics didn’t totally fall in love with it. It currently holds a 63% on Rotten Tomatoes, which isn’t bad, but it’s not even close to the original’s 97%. However, audiences responded to Afterlife positively as it has a 94% audience score. Plus, it also has a higher critic score than Ghostbusters 2, which sits at 53%.

Afterlife may not be as beloved as the original, but there is still time for a new generation to grow up with it. The film is now available to buy or rent on VOD.

Vote for the 2022 Isaac Awards here now through Sunday, March 20.