“Welcome to another night of entertainment in our disease-ravaged, fascist state” 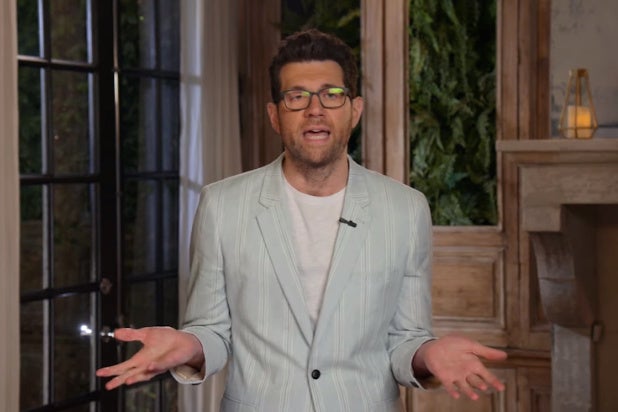 Billy Eichner took over for Jimmy Kimmel on Wednesday’s episode of “Jimmy Kimmel Live,” and he wants you to know it’s not that big a deal.

“I’ve always wanted to host a late-night talk show,” Eichner said during his opening monologue Wednesday night. “So someday I hope to. Because this is not a late night talk show. This is like hosting the world’s saddest make-up tutorial. And now, let’s put a comedic spin on some devastating news.”

As you may or may not know, Kimmel is taking two months off from his show, but the show isn’t going on hiatus — ABC is bringing in guest hosts in Kimmel’s stead. Anthony Anderson ran the show on Monday and Tuesday, and Billy Eichner is taking over for the rest of the week.

“Welcome to another night of entertainment in our disease-ravaged, fascist state. Bryan Adams once sang ‘Summer of 69,’ but this is the summer of N95,” Eichner said to kick off his monologue.

“Now, if you don’t know me maybe you’re looking at the screen and thinking, ‘Did John Krasinski have some type of terrible accident?’ But no, I’m Billy Eichner. I’m here filling in for Jimmy Kimmel tonight because when I think about who deserves two months off from work it’s definitely public school teachers and the man who won an Emmy for producing a one night reboot of ‘The Jeffersons.’ “

Naturally, the monologue very quickly turned to the biggest topic of the moment.

“I’m here in Los Angeles, where this weekend I’ll be participating in that classic summertime activity: mitigating risk,” Eichner joked.

“As you may know, wearing face masks that help prevent COVID-19 has weirdly become some kind of political issue. Angry Americans have been sending death threats to health officials who’ve been advocating for mask requirements. Which I think is such a waste of time. You’re already not wearing a mask in the middle of a pandemic. We know you want to kill us. We knew that back when you kept wearing guns to Chipotle.

“America, what are we doing? Americans weren’t even able to take the virus seriously as a public health threat for as long as they took James Franco seriously as a short story writer.”

On some level, however, Eichner certainly does understand why some folks are getting restless.

“Look, I get it. I do. You’re over it. Quarantine is hard. I live alone and to be honest I’m a little sick of people telling me not to socialize,” Eichner said. “I mean, easy for you to say, you have a husband and kids. I’ve been sitting at home alone for four months watching the Jeffrey Epstein doc on Netflix and saying, ‘How did that we let that happen?’ to my broom.”

Later in the monologue, Eichner did a bit about joining Cameo, an app that allows people to pay celebrities to deliver personalized video messages to fans. But it’s Billy Eichner, so the messages end up being kind of mean. For example, one of the (presumably fake) messages sees him lecture a woman for not wearing a mask when she leaves home. And another berates a child for not choosing a more woke theme for his bar mitzvah.

You can watch Eichner’s opening monologue from Wednesday’s episode of “Jimmy Kimmel Live” in the video embedded up at the top of this article.

Related posts:
July 9, 2020 TV and Movies Comments Off on Billy Eichner Replaces Kimmel to 'Put a Comedic Spin on Some Devastating News' (Video)
Celebrity News:
Justin Hartley’s Ex-Wife Lindsay Defends Him Amid Chrishell Allegations
New Edition: Where is Johnny Gill Now?
The surprising meaning of Kamala Harris’ name
Chrishell Stause Likes Tweets Hinting That Justin Hartley Cheated
Kelly Ripa's Most Recent Instagram Clap Back Is Epic
Recent Posts
This website uses cookies to improve your user experience and to provide you with advertisements that are relevant to your interests. By continuing to browse the site you are agreeing to our use of cookies.Ok