Near the end of the first season #blackAF, the character Kenya Barris — overworked TV writer, inattentive husband and father — finds wisdom in an unexpected place: an episode of black-ish, a sitcom created by… the real Kenya Barris. “The humble words that Andre Johnson said — that I wrote — really got to me,”  faux Kenya Barris explains.

That the #blackAF version of Barris can watch black-ish isn’t in and of itself odd. In his first Netflix comedy series, the celebrated showrunner is playing an exaggerated version of himself, with his actual résumé. Early in the first episode, his teenage daughter Drea (Iman Benson) — whose video essay application to NYU gives the new show its mockumentary structure — talks about her father’s work on black-ish, grown-ish, and mixed-ish, before we see the whole family at brunch toasting his new Netflix deal.

What makes that scene strange is that #blackAF basically is black-ish, with a different cast. Barris had already modeled the ABC sitcom’s Johnson family on his own. Here, he and his biracial wife Joya (Rashida Jones) have six kids who mostly seem like mix-and-match versions of Dre and Rainbow Johnson’s children. This fictionalized Kenya getting advice from himself through the mouth of Anthony Anderson would be like if Dre could periodically hear Barris’ actual voice telling him what to do and say.

There’s a long history of autobiographical sitcoms, whether the the star is playing himself or a thinly-disguised version of the show’s creator. Carl Reiner wanted to play the lead on what became The Dick Van Dyke Show, which was based on his experience writing for Sid Caesar; he instead wound up with the Caesar part, and would find story ideas by asking his writers every Monday morning what they did with their families over the weekend. Everybody Loves Raymond was based equally on the lives of star Ray Romano and creator Phil Rosenthal — whose wife once hit him on the arm when she saw Ray Barone deliver an apology to wife Debra after an argument like one she and Rosenthal had that ended less sweetly. (“How come you understand it for television?!” she demanded.) Jason Alexander initially struggled to play George Costanza on Seinfeld until he realized that he should just imitate Larry David, on whom George was clearly based.

David, of course, went on to play himself in Curb Your Enthusiasm, a show in which Seinfeld also exists. David once literally played George in a Curb episode, and the two series share certain structural details and areas of interest (both did famous episodes involving participants in the 1986 World Series), but on the whole, they’re clearly different shows doing different things. #blackAF, on the other hand, never shakes the feeling that it’s black-ish-er — the version Barris can’t quite make on ABC, due to broadcast network restrictions in content and running time, and their desire to have a recognizable star. The shows feel so similar that you can easily imagine Anderson and Tracee Ellis Ross delivering many of Barris and Jones’ lines. Though #blackAF is frequently very smart, and at times explosively funny, the comparisons it constantly invites to Barris’ previous work can be terribly distracting.

Barris doesn’t exactly hide from this. When Drea is going through her dad’s résumé, she says, “Everything he’s ever done has been black stuff, about black things with black people. Now that I think about it, he’s pretty much a racial profiteer.” Then she adds, “God, he’s such a one-trick pony!” There are minor distinctions: Kenya and Joya are wealthier than Dre and Bow — and even more reckless with their spending, to the point that Drea and eldest daughter Chloe (Genneya Walton) frequently worry about the family going broke. And he works in showbiz rather than advertising, while Joya is on break from being a lawyer, as opposed to Bow being a doctor. But the dynamic of Kenya’s writers room(*) isn’t that far removed from Dre’s conference room meetings; Kenya’s closetful of athleisure suits is only slightly more ridiculous than Dre’s sneaker collection; his disappointment in middle child Pops (Justin Claiborne) is pretty close to how Dre feels about Andre Junior(**), etc.

(*) The writers are played by, among others, Angela Kinsey from The Office, black-ish producer Jonathan Groff, and Nelson Franklin, who has a recurring black-ish role as the son of Dre’s boss. It’s unclear whether they’re meant to be writing for black-ish, for Kenya’s new Netflix show — which would mean… we are watching the writing of the show we are watching? — or something else. Best not to think too hard about it.

So where are the differences, exactly? In a letter that accompanied screeners of the first season, Barris wrote that he wanted the new series “to be something bold, honest, and unfiltered. Something where I could take off all the straps and really hang out of the plane — even if it felt terrifying at times. Spoiler alert: When your first real acting job is playing a heightened version of yourself on a show that dramatizes your actual family — things get terrifying.”

It’s that last part that’s the most obvious point of demarcation. As Barris notes, he’s not a professional actor, and his comfort level even in the most familiar possible role waxes and wanes. He can seem understated to a fault in some scenes; Jones herself has spent most of her career playing buttoned-down characters in comedies like Parks and Recreation and Angie Tribeca, yet her energy level frequently blows him off the screen. In other scenes, though, Barris and his collaborators use his low-key demeanor to the show’s advantage, particularly in the ways Kenya takes deep offense to being called out for all of the ridiculous things he does on the regular. (When his white assistant objects to his huge, omnipresent gold chain, Kenya puts on “Maybe It’s Time” from A Star Is Born to brood and ask himself, “Oh my god, am I a coon?”) But pretty much every person he shares a scene with is a more polished performer — the kids included (particularly Benson, who has to carry so much of the emotional part of the story) — and there are many moments where it feels like Barris is leaving laughs on the table that a more seasoned actor wouldn’t.

Does #blackAF feel more unfiltered than Barris’ previous work? The language is franker, particularly with a liberal use of the F-word, and occasional use of variations on the N-word. And the tension between Kenya and Joya, and within various parent/child and sibling/sibling combinations, is much more fraught than black-ish got, even in the season where Dre and Bow briefly separated, with the potential for divorce(*) being no laughing matter for Chloe, Drea, and their younger brothers and sisters.

But #blackAF is willing to push only so far past the limits of what could happen over on ABC. The episodes are long — all over 30 minutes, with the fifth installment running past 48 minutes — and some story points are more specifically rooted in the African-American experience than Barris’ broadcast network bosses would allow, at least in the ways that the new show covers them. The third episode features both a Juneteenth celebration and an extended debate about adultification, a phenomenon by which, as Drea explains, people believe that “little black girls look and act older than their age to justify the horrible shit done to them.” Stories like that, or that super-sized fifth episode’s discussion of whether black audiences should feel obligated to support black art even if they don’t like it(*), take advantage of the relaxed running time and lack of network notes to go deep on their subjects, and that can be really effective.

(*) That episode is packed with cameos by Barris’ peers in making black films and TV shows. The best of these is a long conversation with Tyler Perry, who explains at length why he’s not the least bit troubled that white critics routinely pan his work. “I don’t give a fuck,” he argues, “because I’m talking to us!” It’s like the famous (or now infamous) Louie scene where Louis C.K. cast former nemesis Dane Cook in a very different and more sympathetic public light, only even more generous. Perhaps an even greater feat: The episode might make you reconsider your feelings for Juwanna Mann. 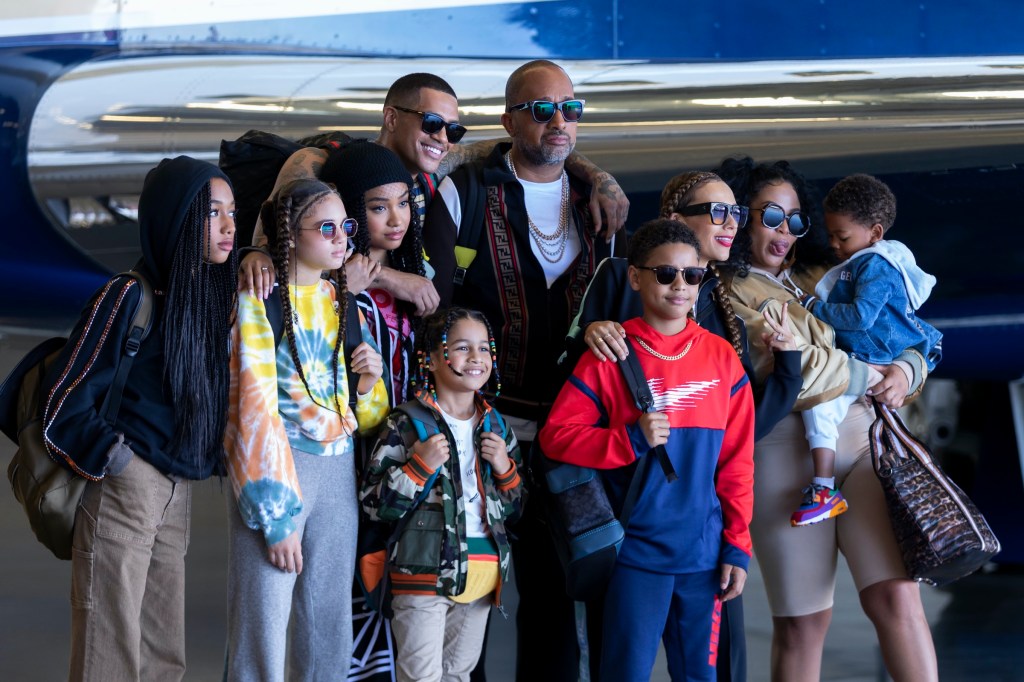 The Barris family (and a few hangers-on) take a vacation in #blackAF. Gabriel Delerme/Netflix

At other times, though, it feels like Barris is still writing with broadcast strictures in mind. Modern Family co-creator Steve Levitan has a cameo as himself in the series premiere, and #blackAF often suffers from the same problem that began to afflict Levitan’s show after a few seasons: Characters will spend the bulk of each episode acting like they despise one another, only for a few heartwarming scenes or a montage with inspirational voiceover to arrive at the end, suggesting things will always be OK. At various points in this first season, Kenya and Joya’s marriage seems irreparable, and the feel-good moments that follow ring false. For that matter, much comic fodder is generated from both Kenya and Joya being narcissistic parents who are almost never emotionally present for their kids — Kenya literally doesn’t recall any of their birthdays — yet one episode builds up to a sincere conversation where Drea insists he’s a good dad.

The dissonance between the positive and negative versions of Kenya may be another situation where Barris the novice actor is getting in the way of what Barris the veteran storyteller is trying to say. Barris’ gifts as a writer and producer are on frequent display across this season, particularly in how he showcases his co-stars. (If it’s not hard to imagine Tracee Ellis Ross playing Joya, the reverse is true, too: Jones is lively and sharp-tongued enough that you can see her playing Rainbow.) Not all of the new show works, but the parts that do are incredibly funny and/or poignant.

Mostly, though, #blackAF left me curious to see the other shows that Barris makes with his $100 million Netflix deal. When other great showrunners have made the leap from broadcast to cable or streaming, it’s been to make the kinds of series that wouldn’t have been remotely possible at their former homes. Barris, though, has basically remade a show he already did at ABC. Was it to prove, as Carl Reiner always wished, that he should have been playing the lead all along? Is it just baby steps into the deep and murky waters of the streaming world? In the wake of his divorce, did he, like many writers, need to spend even more time working through a real-life trauma in a fictionalized context?