BRADLEY Walsh mocked The Chase contestant and showed her the door after getting an "easy" question wrong. 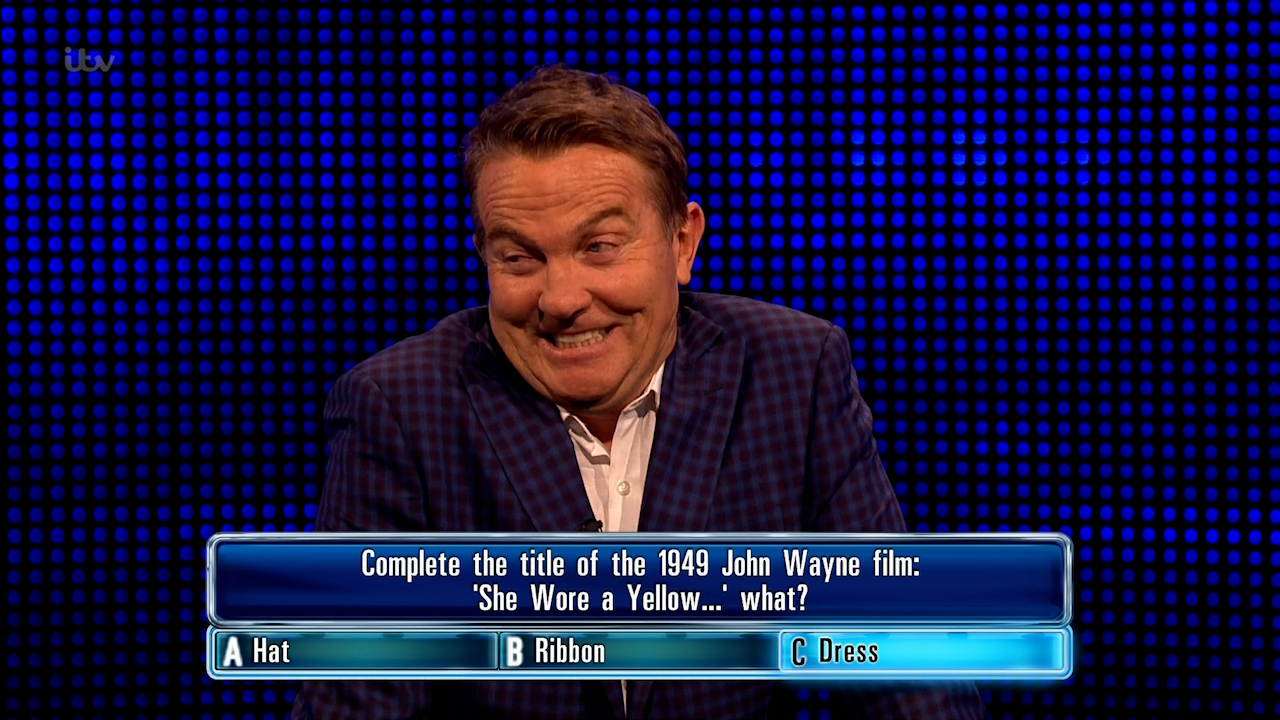 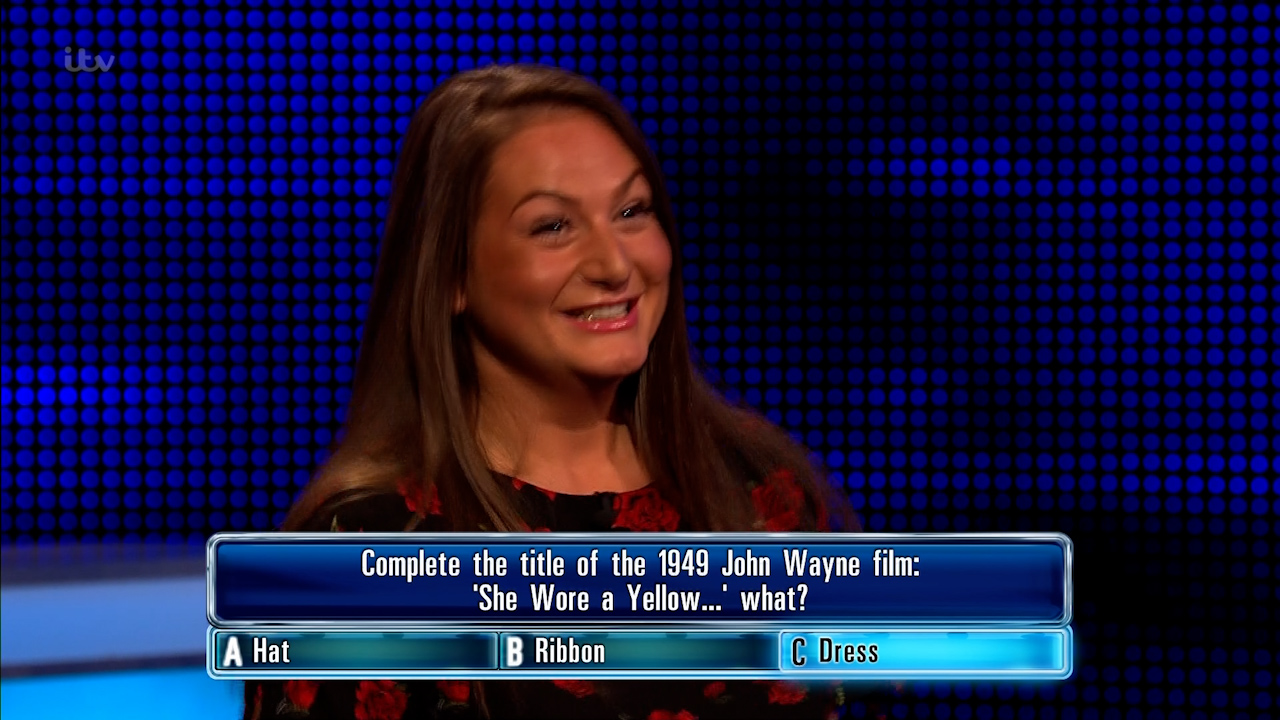 Bianca was the third player to take on the professional quizzer.

She got off to a flying start, but things went down hill when host Bradley Walsh asked her a question about a popular 1949 film.

Bradley said: "Complete the title of the 1949 John Wayne film, 'She Wore a Yellow… what?"

He then gave her the options of hat, ribbon and dress.

The contestant wasn't sure which one to pick so she went with dress.

She was left concerned after Bradley pulled a funny face and asked: "Why are you looking at me like that?"

make up your mind

He savagely replied: "Because the doors are there, there."

It was later revealed that the answer was actually ribbon.

Bradley wasn't the only one unimpressed with Bianca's film knowledge as one fan wrote on Twitter: "Ribbon, you moron!"

It comes after fans were distracted by a "gorgeous" contestant on Tuesday night.

Many were bowled over by the impressive player with one fan spluttering: "Natalie is not only a fantastic quizzer but bloody hot too!"

Another called her "great viewing" as she went on a rarely-seen run of eight correct questions.

Even Paul 'The Sinnerman' Sinha was impressed with Natalie, who comes from Eastbourne in East Sussex.

He said, after she corrected answered seven questions in the cash builder round: "Hello Natalie.

"Finally we've got an actual proper really good player. I was very impressed by that."

Among the questions she got right were: "In the Arabian Nights tales how many voyages does Sinbad make?" To which she answered: "Seven."

In the end Natalie and another contestant called Patricia ended up battling for a prize pot of £12,000 in the final round of The Chase.

However, they didn't do enough to stop The Sinnerman, after answering 13 questions correctly.

He demolished that lead, denying the pair their jackpot and sending them home from Bradley Walsh's quiz empty-handed. 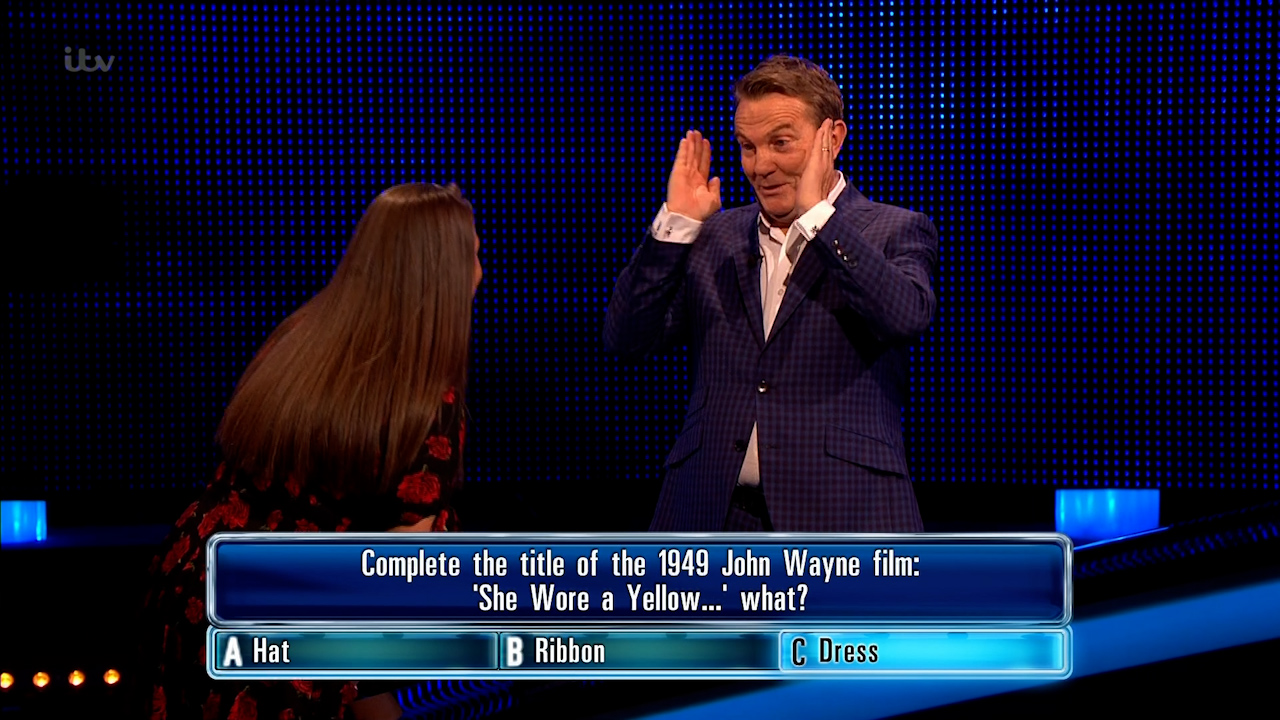 Related posts:
December 9, 2021 TV and Movies Comments Off on Bradley Walsh mocks The Chase contestant and shows her the door after getting 'easy' question wrong
Celebrity News:
Novak Djokovic is extremely disappointed to be deported from Australia
Lucy Mecklenburgh flaunts baby bump in swimsuit as she kisses fiancé Ryan Thomas
50 Cent’s GF Cuban Link ‘Sick of’ Trolls Accusing Her of Having Plastic Surgery
Bob Saget Revealed COVID-19 Battle Days Before Death: 'It Does Not Feel Good'
Katherine Ryan takes mick out of Molly-Mae Hague backlash amid '24-hour' comment
Recent Posts