For the past eleven months, Geoff Metcalfe (played by Ian Bartholomew) has been taking more and more control over Yasmeen Nazir (Shelley King) life. The Speed Daal chef is unaware she is being tormented and coercively controlled by her husband every single day. Express.co.uk spoke exclusively to Sarah Jane Lenihan, a Partner at Stowe Family Law LLP about this important storyline Coronation Street was portraying and the possible outcomes, and there is a chance the abuse could go one step too far possibly resulting in Yasmeen’s death.

In 2015, the Serious Crime Act was introduced which made controlling or coercive behaviour in an intimate or family relationship, where the behaviour has a serious effect on the victim, a criminal offence.

Alongside it, The Home Office produced Statutory Guidance ‘Controlling or Coercive Behaviour in an Intimate or Family Relationship’ which provides a non-exhaustive list of possible coercive or controlling behaviour which include: isolating a person from their friends and family, financial abuse including control of finances, such as only allowing a person a punitive allowance, preventing a person from having access to transport or from working, as well as monitoring their time – all of which Yasmeen has been subjected to.

On Friday night, viewers tuned in to see just how scared Yasmeen has become of Geoff.

Earlier in the week, he had convinced her to stay at home and rest after she injured her back, and when Geoff returned home from working a shift in the restaurant he demanded dinner. 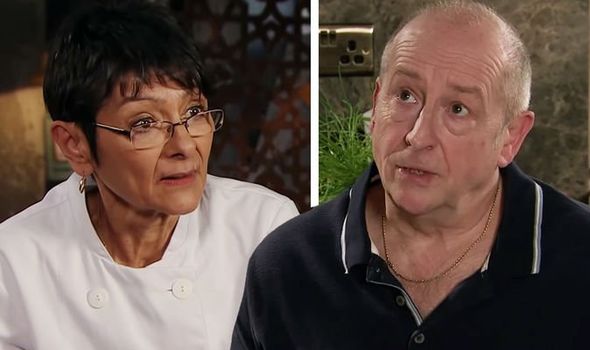 “Talking of food, I am famished! What time’s dinner?” Geoff asked and Yasmeen replied: “Sorry Geoff, I haven’t started cooking yet, I’ve been so busy with things!” But her answer wasn’t good enough to her and he instantly banished her to the kitchen to prepare his meal.

In the next scene, Yasmeen served up the meal she had cooked: “I would’ve made a proper stew but I know how hungry you are,” she explained apologetically.

“There’s no meat,” Geoff snarled and Yasmeen replied: “I ran out of money, you said I had to stick to the budget.”

“I am not eating this rubbish!” Geoff shouted after scraping the food directly into the bin and slamming the plate down.

Yasmeen then offered to make him an alternative, but Geoff yelled back: “No, I’ll do it like I do everything else around this place, except look after your precious chickens. Get upstairs! Give me some space, I’ll call you when I’m ready.”

With Yasmeen out of sight, Geoff looked over his shoulder evilly and viewers were astounded when he went outside to get Yasmeen’s beloved pet chicken Charlotte Bronte which he later served to her for their dinner. 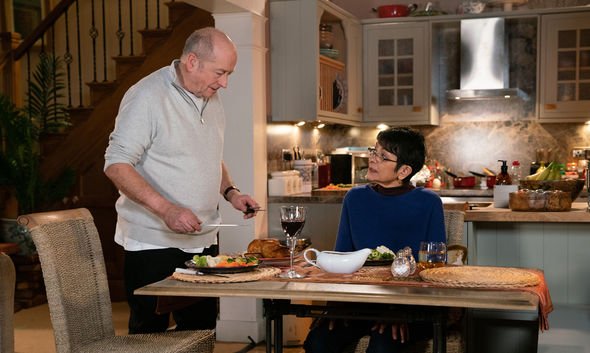 “Smells delicious! I didn’t realise you had been to the shops and done all this, you should have woken me!” Yasmeen said when she came downstairs. “I’m so sorry about before.”

“I should be the one apologising,” Geoff said. “I shouldn’t have got so angry, it was just work stress, do you forgive me?”

After Yasmeen accepted his apology, she sat down at the dinner table, and Geoff remarked: “I thought we could have our own hen-do tonight!”

He then chuckled to himself and offered his wife gravy for her dinner: “Tuck in, it’ll go cold! How is it? Not too dry? ”

“Perfect,” Yasmeen replied. “It’s not at all, not at all [dry]. Perfect. So tender,” she added as she ravenously shovelled the meat into her mouth. 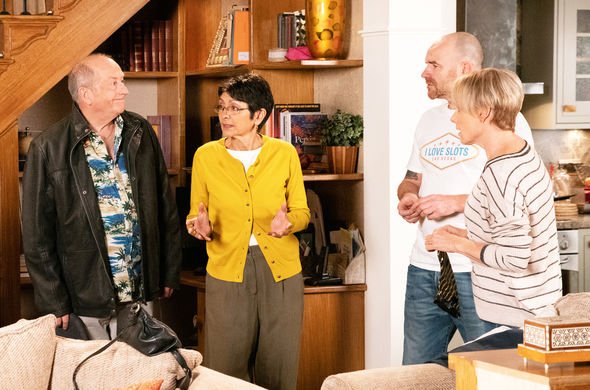 “Good, I thought she might be a bit dry being an older bird,” Geoff darkly remarked watching Yasmeen slowly realise she was eating her own pet. “One last time, I’d like to raise a toast, to Charlotte.”

Unable to comprehend what had happened, Yasmeen panicked and spat out the meat, she then ran outside coughing and spluttering.

“Feel better now you’ve thrown up? I genuinely thought you’d be pleased,” he said. “I saved us money, I used our own chicken for food instead of buying one pumped full of water and chemicals.”

When Yasmeen argued Geoff should’ve asked her permission first, he defended: “I wanted it to be a surprise! It wasn’t fun you know, killing and plucking, it was ruddy hard work, she put up a right fight.”

He then flipped and blamed the entire thing on Yasmeen: “If you hadn’t of made such a hash of dinner in the first place, none of this would’ve happened,” and ordered her to do the washing up while he left for the pub.

With Geoff capable of killing a chicken in order to prove a point to Yasmeen, how far will he go to teach his wife a lesson?

Sarah spoke about how long it could take Yasmeen, or someone in her position to realise what is happening to her and seek help.

“It is difficult to tell as everyone is different,” she told Express.co.uk. “I have had clients who have phoned the police after the first incident and take legal advice and exit the relationship. On the other hand, I have had others that have endured the behaviour for many years; in one case as long as 50 years before finding the strength to leave.

“The latest statistics from ONS taking an average of the last 10 years conclude that two women a week are killed by a current or former partner in England and Wales!”

Does this mean there is a strong possibility Geoff could kill Yasmeen, or perhaps frame it as an accident or suicide?

If you or anyone you know has been affected by Yasmeen’s storyline, please see Women’s Aid website here.