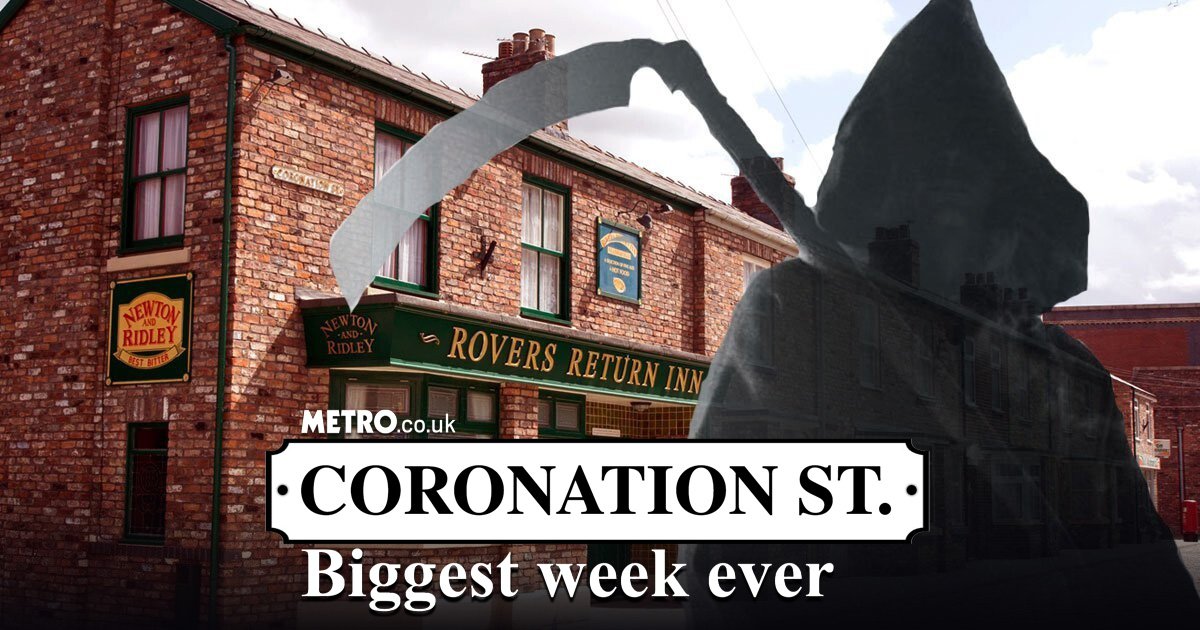 Death is coming knocking in the least subtle way on the doors – and underground Victorian sewers – of Coronation Street and the question on everyone’s lips is who dies?

And also, why has no-one filled that bloody sinkhole yet?

Manchester weather is typically torrential and a downpour results in that blasted hole collapsing further, plunging four confirmed residents into the depths below – a flooding sewer system.

Characters most at risk in this particular disaster include landlady Jenny Connor (Sally Ann Matthews), who finds herself trapped, in the hope that someone will come and save her.

Johnny (Richard Hawley) comes to the rescue but he’s hardly James Bond so he ends up trapped too, with both parties struggling to keep their heads above water.

They aren’t alone down there either. Abi Franklin (Sally Carman) has been on a mission to kill Corey Brent (Maximus Evans) but they both plunge down too.

Luckily – or unluckily – Abi manages to hold onto the gun and a tense stand off ensues with both of them grabbing the firearm at one point.

But as waves of water crash through the labyrinth of tunnels, it isn’t just each other that they should be scared of.

The elements are just as likely to finish them off.

These four characters are the only ones confirmed to fall through so are understandably top of the list to meet their maker – but there’s nothing to say that others won’t end up down there as part of a rescue mission.

Meanwhile, Harvey Gaskell (Will Mellor) is back and determined to kill, with Leanne Battersby (Jane Danson) firmly in his sights.

Back on the Street amid a stormy backdrop, he plans not just to finish her off but as many of her loved ones as possible.

If prison can’t stop him, then surely only one thing can – death.

Fans would be gutted if Harvey killed off such a show favourite then escaped once more – so we reckon we could see a target on his back too. A well deserved one at that.

But will he take anyone with him?

Finally, we don’t much fancy poor Aadi Alahan’s (Adam Hussain) chances either after their car is smashed into by Harvey’s prison van.

Dev (Jimmi Harkishin) has a snap decision to make as the car has caught fire and is about to explode – which of his children does he save?

Grabbing an unconscious Asha (Tanisha Gorey) from the vehicle, he gets out of the way just as the blast erupts with Aadi seemingly still inside.

Has Dev left his son to die?

Of course, there are a number of characters involved in the dramatic events and as the whole Street is pulled to the brink of disaster, these might just be the top characters in danger at the moment.

But as fast as a sinkhole can collapse, things can change.