Another film, another beautiful leading lady to lead The King into temptation – or the other way around. Suzanna hit Hollywood as a teenager and soon found herself living out her wildest dreams when she shared the screen with her idol, and romped with him on a tropical beach. It was a meteoric rise for convent school girl Sandra Eileen Anne Smith from Berkshire, who blagged her way into a meeting with Elvis’ agent and never looked back.

Young Sandra lost her father when she was just six. A notorious gambler, he’d told his daughter that her godmother was famous film star Vivienne Leigh.

Showing the spirit that would characterize her whole life, Sandra took herself to Leigh’s house aged eleven and introduced herself. The actress remembered her father but had no recollection of being her godmother. Even so, she agreed to give the aspiring young actress some guidance and a few lessons.

Suzanna later said: “‘It was really exciting. She was so fantastic to me. She said that so many of my dreams seemed like hers.”

A few years later, Leigh also agreed to let the teenager take her name professionally and soon the reborn Suzanna Leigh already had small roles in TV series The Saint and then her own show in France. And little over a year later, she would be starring with Elvis. 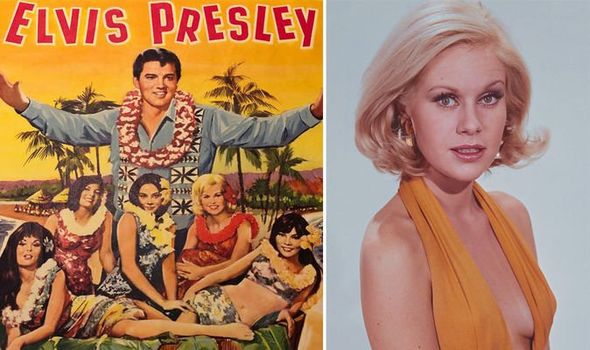 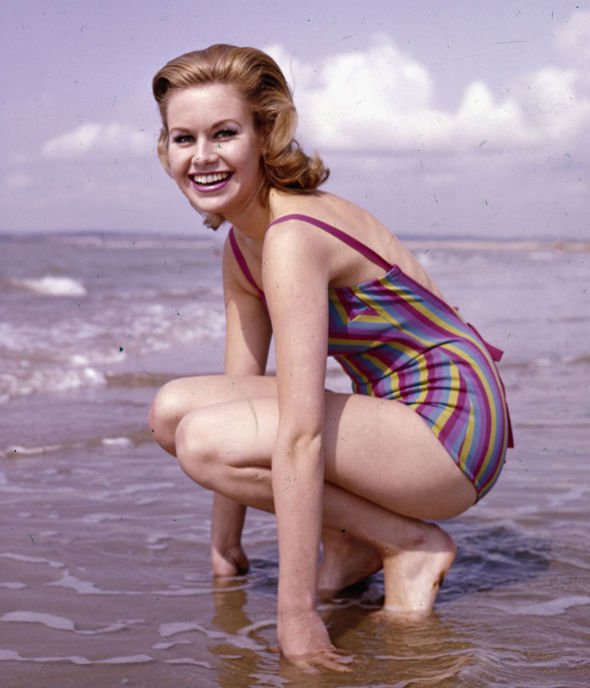 While she was in France, Suzanna heard that Hollywood agent Hal Wallis was in London scouting for talent. She promptly called in sick and dashed to the airport. In London. She discovered which room he was staying in at the Dorchester and apparently banged on the door shouting “I’m the one you’re looking for.”

Suzanna later told the website Elvis Australia: “There’d be an army of secretaries to stop you doing that today. It just wouldn’t happen.”

At just 19 she found herself flown to Hollywood and soon landed her first job with Paramount Pictures to star in the Tony Curtis and Jerry Lewis bedroom farce Boeing Boeing.

She said: “My first day in the studio this big Caddy came along with the chauffeur. It happened exactly the way it did in Sunset Boulevard. I thought ‘That’s it, I need no more’. It’s the most amazing feeling when all your dreams come true.”

DON’T MISS
Elvis: Heroic star jumped out of car to stop fight weeks before death
Elvis proposed to first co-star Debra Paget and ‘never got over her’
Did Elvis have kids with girlfriend Linda? Who are her famous sons? 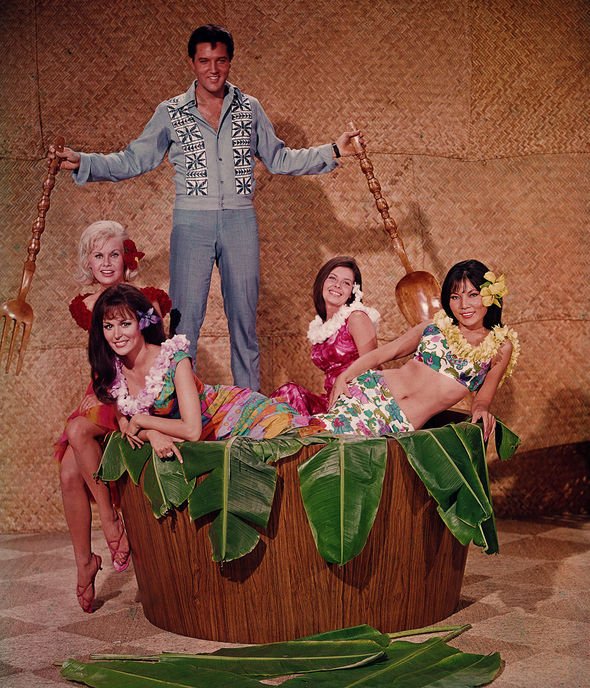 Her next film would be even more exciting.

Suzanna told the Hollywood Reporter: “Elvis and I were both under contract to Hal Wallis, who was known as the ‘star maker.’

“I remember the day that Hal said that I would be making my next movie with Elvis. I was an incredible fan of his, and then he said ‘You’ll be filming it in Hawaii.’ Wow.

“Elvis was a fabulous actor, very underrated by a lot of the conventional theatre people.”

Elvis played Rick Richards, a playboy helicopter pilot whose reckless flying and womanising jeopardise both his career and his romance with Judy.

The film gives The King the chance to deploy the cheesy pick-up line on Judy: “We met before, on a surfboard, in Waikiki. You were wiped out.”

It got him the girl on-screen and off-screen Suzanna recalled by swept away by Elvis’ kissing. She waxed lyrical about their passionate clinches in her 2003 autobiography, Paradise, Suzanna Style.

She wrote: “His kisses held an intensity that melted my very being. I slipped my arms around his neck and our bodies entwined. This was all madness, but we didn’t stop. A person could go to the gallows with such a kiss lingering on their lips, knowing life had been good.” 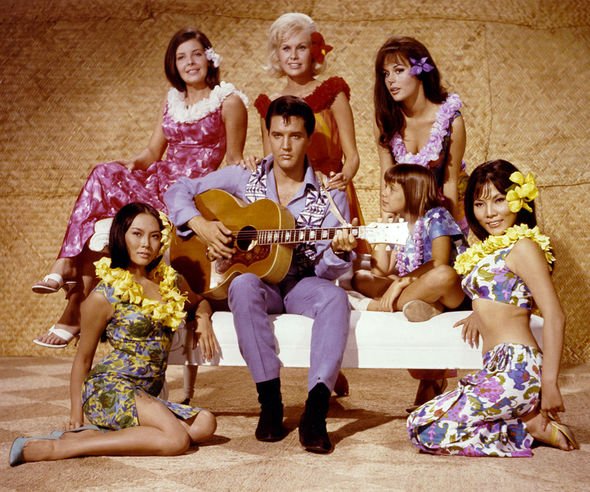 The couple also bonded over their shared religious interests and spirituality, and their belief in guardian angels.

Suzanna said: “We only kissed twice but there was the promise of many more intimacies to come. We remained friends throughout my passionate affair with Richard Harris, and wanted to make another movie together — but it was never to be.”

The actress also later took credit for a notorious addition to Gracelands’ menagerie.

She said: “Elvis had never met anyone quite like me and he loved to hear me tell stories. He was very hot on security, and I told him about keeping a pair of peacocks to make a noise if any intruders approach. Years later I went to Graceland and found he had got his own peacocks. Of course, being Elvis, he didn’t have a pair of peacocks, he had a flock of them. Apparently, the noise was mind-blowing.” 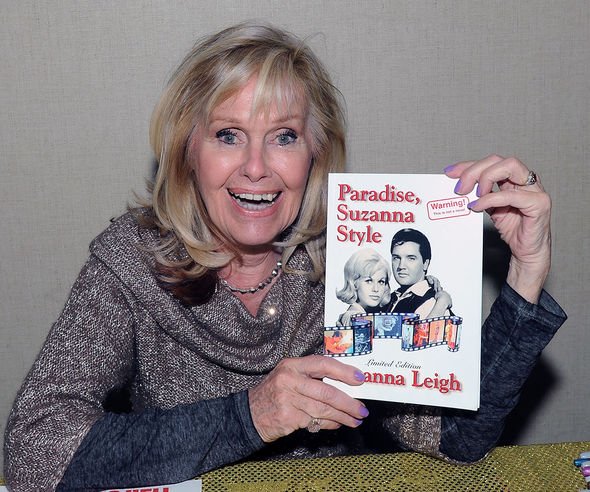 Suzanna didn’t just visit Graceland, she said she ended up getting a job there.

After Paradise Hawaiian Style her career abruptly ended in Hollywood. She later said she had been lined up for another film with Elvis but a war between British actors’ union Equity and the American counterpart, the Screen Actors Guild had put a temporary halt on Hollywood roles going to Brits.

At just 20 she had film offers back home and quit LA in 1966, not realising at the time she would never go back. A series of horror and cheesy spy movies followed. Her career wrapped up in 1973 with the bonkers horror musical Son of Dracula, produced by Ringo Starr and starring the former Beatle alongside pop star Harry Nilsson.

An ill-fated marriage and thieving manager left Suzanna broke by the late 1980s. She took a variety of jobs, including selling the Encyclopedia Britannica before “in 2003, I put my connection with Elvis to use by going to work as a VIP tour guide at Graceland.”

It was there that she became deeply involved in conspiracy theories surrounding The King’s death that she share and investigated until her death in December 2017 from liver cancer.

Related posts:
June 26, 2021 TV and Movies Comments Off on Elvis co-star Suzanna Leigh I melted when we kissed, it was madness but we couldnt stop
Celebrity News:
Oh no, Prince William wont be able to grouse-hunt at Balmoral this year
Selena Gomez Claps Back After The Good Fight Jokes About Her Kidney Transplant: It’s ‘Tasteless’
Kathy Griffin Reveals She's Battling Stage One Lung Cancer & Is Having Surgery To Get Half Of Her Left Lung Removed
Taylor Swift Narrates Inspirational Promo For USA Womens Gymnastics
Pregnant Louisa Lytton gives baby touching hand-me-down as she packs hospital bag
Recent Posts