Enola Holmes (played by Millie Bobby Brown) has arrived in full force as the full trailer for the latest Netflix film has now been released. Showing off the new and unexplored story of the brand new member of the Holmes family – Enola.

In the trailer – which can be seen at the top of this article – Enola narrates her actions, as well as the plot that is evolving around her.

What’s more, the youngster is seen to be getting up to a lot of mischief as fans have been given their first glimpse into what is actually going on in the film.

Enola lived alone at home with her mother (Helena Bonham Carter) for her entire life.

But Enola was left stunned when she one day awoke to find her mother had disappeared, prompting a journey of discovery and adventure. 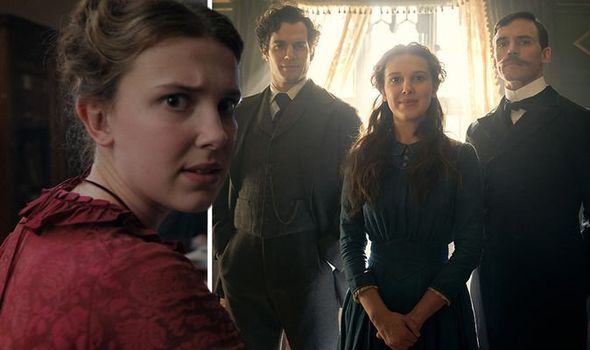 The film gives off some Guy Ritchie vibes, with a heaping dose of classic Sherlock Holmes banter.

However things seem to get a little fishy when Enola finds herself being chased by her two brothers, Sherlock and Mycroft (Sam Claflin).

Now, in a race against time, the youngster is forced to take on her brothers, as well as the forces who are working against her, to find her mother.

Throughout the trailer Enola finds some allies to work closely with.

One of these allies is a young lord, played by Louis Partridge.

While not a lot is known about this young man just yet, fans will of course expect a lot.

As he is on the run, it makes sense that he is involved in some sort of life-threatening debacle.

With Enola on his side, it looks like he has no choice but to help her outsmart their enemies, and indeed the Holmes brothers, to finish their quest.

In the original Arthur Conan Doyle books Sherlock Holmes did not have a sister.

In the BBC version of the stories involving Holmes, he was given a sister, Eurus Holmes.

However Enola Holmes is based on the series of books written by Nancy Springer.

So far, the author has penned six books involving Enola and her battle against the forces of injustice.

These stories see her taking on a number of missing persons cases, as well as continuing to look for her mother.

Above all, however, Enola is tasked with avoiding her detective brothers, Sherlock and Mycroft, and comically one-upping them at every turn.

Enola Holmes will be released on 23 September, 2020, on Netflix.

Related posts:
August 25, 2020 TV and Movies Comments Off on Enola Holmes trailer: Millie Bobby Brown BATTLES Henry Cavill as Sherlock Holmes’ sister
Celebrity News:
‘Avengers’ Male Cast Defends Chris Pratt Over ‘Worst Hollywood Chris’ Label, but It Backfires
Dax Shepard Covers His Face With His Shirt While Getting Food Delivered
Scott Disick Hilariously Pokes Fun At Kourtney Kardashian's Use Of WAP Lyrics On Instagram!
Ina Garten Reveals What's 'Really Impressive' To Her at Dinner Parties
Jacqueline Jossa has a secret tattoo that was inked by husband Dan Osborne
Recent Posts
This website uses cookies to improve your user experience and to provide you with advertisements that are relevant to your interests. By continuing to browse the site you are agreeing to our use of cookies.Ok