With the Jedi Order’s downfall at the end of the Clone Wars in Revenge of the Sith, and its struggle to really gain footing afterward, there’s been this concept of “Gray Jedi.” It doesn’t actually exist in canon, but there’s much debate on whether it will or if it exists behind the scenes. Could someone like Ahsoka Tano be considered a Gray Jedi?

With Ahsoka Tano showing up yet again in this new timeline on Friday’s The Mandalorian, she’s still not a part of the Jedi Order or creating a new one. Or so it seems; she doesn’t offer up information that she is. But this idea of Gray Jedi will surely still follow her around and will stick around in Star Wars for a bit. What is it? For now, it doesn’t really work in Star Wars canon. At least, not until stated otherwise, and here’s why. [Spoiler alert: Some spoilers for the most recent The Mandalorian episodes ahead].

There is Light and Dark, and there is sort of a ‘gray’ area in ‘Legends’

If the term “gray area” rings a bell, then “Gray Jedi” is a similar concept. Just like Light side is the good side and Dark side is the bad side, then a Gray Jedi is a Force wielder who is capable of using the power of both Light and Dark sides. Like how Palpatine told Anakin that Jedi don’t have the Sith’s knowledge to bring people back from the dead or stop them from dying, which was a major part of his seduction tactic.

Palpatine knew both Jedi and Sith ways, but really only used the Sith ways as a Sith Lord; that’s way more powerful to him but it’s cultivated by hate and anger so it’s not long-lasting and way more parasitic. This is why Jedi can use healing powers like in The Rise of Skywalker but Darth Vader and Maul could only use a fraction of that practice on their wounds. Because their hate and anger couldn’t fully heal.

All this is to say that Gray Jedi, or the concept of them in Legends, use both. They’re neutral and aren’t pulled either way. The reason someone was called this and not a Sith was that in most cases this was someone who just dissented from the Jedi Order, or left. But never became a Sith.

The Jedi, as much as they are “sorcerers” and have powers, are part of an ideology. They’ve been compared to a religion; they have rules and a code, and that’s not for everyone. But that doesn’t mean that the Force is only reserved for Jedi. There are so many more Force wielders out there, and that’s something Star Wars, in the past, hasn’t delved into a ton.

The Jedi aren’t the only ones who can use the Force, and they’ve become misguided

Outside of the Skywalker saga, there are references to other Force wielders out there. The movies make it a big deal that it’s very much a Jedi vs. Sith world, but that’s not the case and The Mandalorian is doing a fantastic job of fleshing that out. In Star Wars: The Clone Wars, there are the Night Sisters, who Asajj Ventress was a part of, who use the Force in their magic. Then in Jedi: Fallen Order, there were the people on Zeffo who used the Force as well.

And, of course, there are other kids who have the Force who never got picked up by the Jedi for whatever reason, especially after the fall of the Republic and the Order. So you can be Force-sensitive or know how to manipulate and use the Force and just not be on the Light or Dark side.

Plus, the Jedi Order lost their way. The original point of the Order was to be like sheriffs in the galaxy. They were neutral and were supposed to protect those that needed help. But it’s when they became political in the Clone Wars and chose the side of the Republic where they went wrong. When they went on to become Generals and have their young Padawans become Commanders in wars that they truly lost the point of their order.

This is part of the reason why Ahsoka Tano left. She was framed for bombing the Jedi Temple, then was expelled from the Order so that she would be put on trial as a citizen, not a Jedi. It showed her their true colors; it made her doubt herself and the Order. Plus, when she did return to the war to help with the Siege of Mandalore, she was still fed up with the way the Jedi chose the side of politics as opposed to helping people. 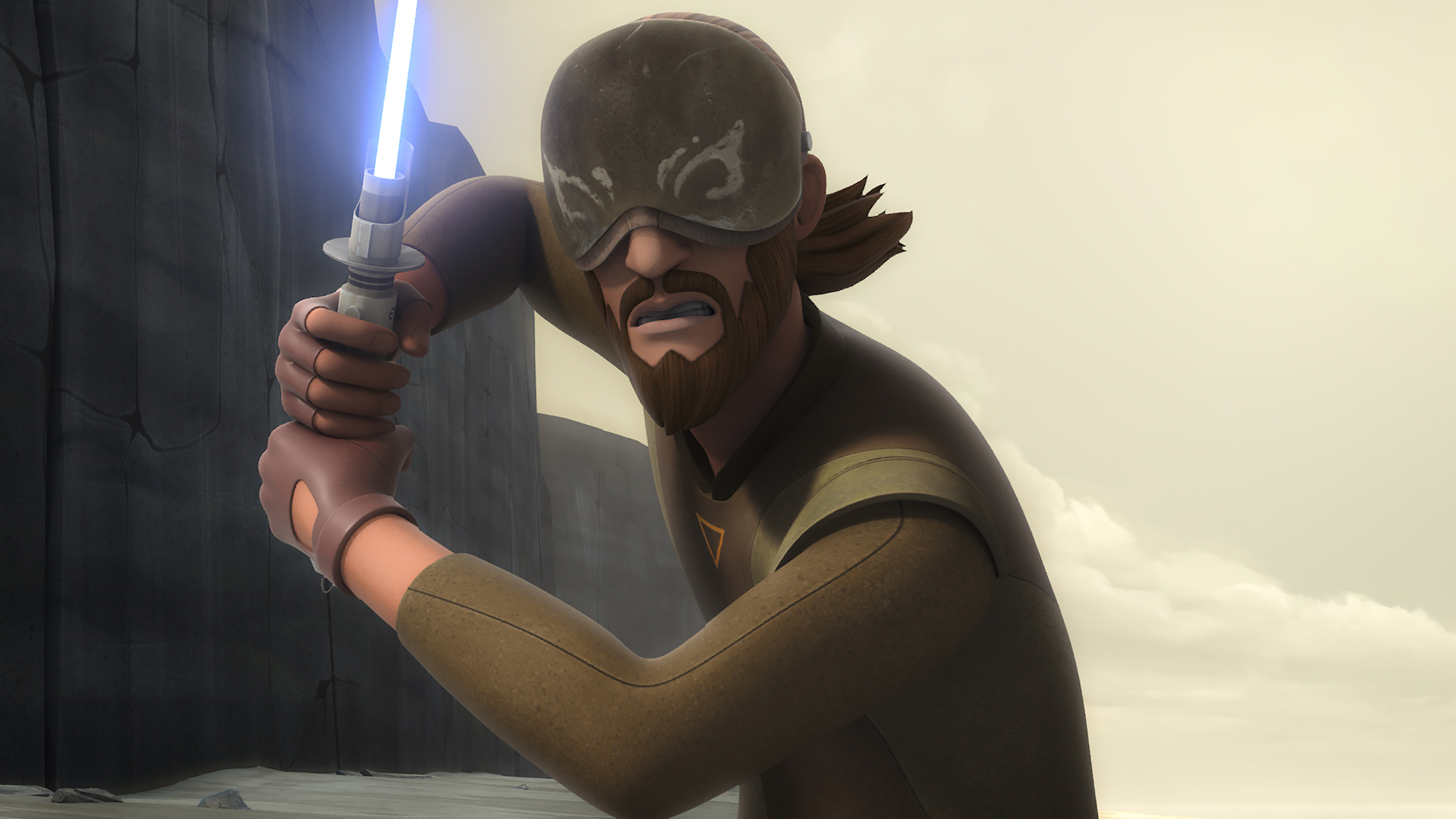 But still, fans have debated on Gray Jedi being a nice balance for the issues someone like Ahsoka had with the Jedi. However, the point of being a Jedi is already about balance. And, again just because you’re not on the side of the Jedi doesn’t mean you have to be “Gray.”

It’s something that we see heroes struggle with often. Some get way closer to the Dark side without going full Sith, like Kylo Ren. And then we see others like Anakin Skywalker completely fall and become Sith, aka Darth Vader. Qui-Gon Jinn bent the rules of the Jedi a lot, but didn’t leave the Order; he just saw the fault of the Jedi and chose to kind of do his own thing at times. But was still committed to the Light Side.

Last year, Freddie Prinze Jr. who voiced Kanan Jarrus on Star Wars Rebels, went on a rant about how this concept not only doesn’t exist, but that their absence comes from the mouth of George Lucas himself. He said it wasn’t his opinion that Gray Jedi don’t exist in canon, but rather Lucas.’

You don’t get to level up in the Star Wars world. That’s a f*cking video game. There’s no such thing as a Gray Jedi! Qui-Gon even says, ‘I turn toward the light because it’s there.’ There’s no gray! That’s pretend fanfiction sh*t, which is cool but don’t try to canonize it because it doesn’t work, and I’m never going to buy it, ever.

Ahsoka Tano is the closest thing to an indifferent Jedi, but she’s also not a Jedi

Basically, if you want to get down to it, the concept of “Jedi” is just a title. Yes, it’s a lifestyle, and a coveted, respected one at that. However, Ahsoka Tano is a perfect example of someone who embodies a Jedi throughout their life but isn’t one for most of it.

After she leaves the Order around the age of 17 or so, she never returns. Or so we know from her story so far. Again, she’s one of those characters that have had a tremendously long life throughout Star Wars canon, as we’re seeing now in The Mandalorian. Even though she came back in the Epilogue of Star Wars Rebels in a white robe, making some think she was Ahsoka the White, in a new life as a Jedi, that doesn’t seem to be the case.

She’s not a Gray Jedi, not now and probably not ever if Star Wars sticks to Lucas’ vision of Star Wars. But, who knows. The franchise has been known to change and evolve. One thing is certain though; Ahsoka has never used the Dark side of the Force. And, as shown in The Mandalorian’s “Chapter 13: The Jedi,” she is still very much aware of what the Dark side can do to someone. So the whole part of a Gray Jedi using both Light and Dark won’t ever really apply to her.

She doesn’t have to be a Jedi, Gray or otherwise; Ahsoka left the Jedi Order, not the Light side.

Related posts:
November 29, 2020 TV and Movies Comments Off on Gray Jedi Don't Exist (Yet) in 'Star Wars;' It' a Tricky Concept That Some Want Ahsoka Tano To Take Up
Celebrity News:
Alexis Sharkey WAS Murdered – Cause Of Influencer's Mysterious Death Finally Revealed
Emmerdale’s Katherine Dow Blyton fears axe over Harriet Finch and Malone murder storyline
Josh Duhamel in Talks to Replace Armie Hammer in ‘Shotgun Wedding’ Opposite Jennifer Lopez
Love Island’s Callum Jones details living with girlfriend Molly Smith and their new family addition – EXCLUSIVE
Dolly Parton Turns 75: Reese Witherspoon and More Celebs Pay Tribute
Recent Posts
This website uses cookies to improve your user experience and to provide you with advertisements that are relevant to your interests. By continuing to browse the site you are agreeing to our use of cookies.Ok