Warning: This post contains spoilers for House of the Dragon Episode 2.

They don’t call House of the Dragon‘s Lord Corlys Velaryon the Sea Snake for nothing.

Sunday’s episode of the Game of Thrones prequel ended with King Viserys announcing that he would wed Alicent Hightower, which swiftly put an end to Corlys and Rhaenys’ plan to marry their daughter, Laena, to the widowed monarch. An incensed Lord Corlys stalked out of the small council meeting upon hearing the news; soon after, we saw him pitching an alliance to… Daemon Targaryen, Viserys’ recalcitrant and revenge-seeking brother. (Read a full recap.)

Corlys is hardly the only character to reveal himself as conniving and power-hungry, but he’s one of the few (so far) to be so overt about it. And if he’s looking for new allies, he’s probably smart to pick someone like Daemon, who shares a similar sentiment of being cheated out of riches, power and/or position. When TVLine’s Dave Nemetz spoke with Steve Toussaint, who plays Corlys, he emphasized how much stock his character places in the (very) long game.

“He is trying to secure his family’s name in history. He’s trying to get his family as close to the throne, and to influence, as he possibly can,” he said. “He’s all about the pursuit of legacy. That is his overriding motivation for everything that he does in the season, to almost the detriment of his relationship and family, generally.” 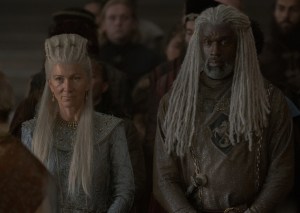 As for Lady Rhaenys, who spent half of Episode 2 skulking about court (did you see her on the periphery of that kingsguard job interview?) and the other half reminding a headstrong Rhaenyra that “men would rather put the torch to the realm than see a woman ascend the Iron Throne”: Is anyone else getting a very strong feeling that the Queen Who Never Was is a shrewd, potentially dangerous player? (And if you’re very well-versed in Westerosi lore and already know the outcome of everything, amazing! But let the rest of us have our fun.)

We asked Eve Best for her thoughts on her character’s simmering resentment about being kept from her rightful place on the throne. “It’s kind of annoying,” she said dryly. “I mean, what can I say? She’s clearly the best candidate for the job. I think everyone on the court knows that, really, simply by virtue of the part that she is passed over, and that is a bummer.”

Toussaint observed, “But the thing about it is, she affects to be OK about it.”

Best nodded. “Inside, there’s stuff going on, but on the surface, she’s an incredibly smooth operator,” she said. “Very politically astute, and plays the game incredibly well. So she’s very hard to know, a lot of the time, what is going on with her. She’s just keeping all of her plates spinning very, very fast and appearing to be completely effortless and cool at all times, with everything.”

While I’m at it, a few more Episode 2 thoughts:

* Who else felt relief, and then sick shame at that relief, when full adult male King Viserys chose teen Alicent — and not small, tiny, barely not a baby Laena — as his bride?

* At least two of my queries about the king’s sculpture — it’s of Old Valyria, and he helps with the plans but doesn’t chisel it himself — were answered in this week’s episode. But then… why was he chipping away at it in the premiere? Royal privilege to futz with stuff?

* So wait: The heavy-ass dragon’s eggs are just placed in the cradle with the newborns, who can’t even lift their heads without assistance? Has no Targaryen considered the potential infant safety issues?

* Who do you think came out on top in that little verbal sparring between Rhaenyra and Rhaenys? (My pick: The Queen Who Never Was.)

What thoughts/questions/predictions do you have after this week’s House of the Dragon?