When looking at all reports surrounding the Marvel Cinematic Universe’s (MCU) upcoming Phase 4 installment, The Eternals, it looks like the movie is on a mission to break the filmic landscape’s mold — on both a narrative and cinematographic front. First off, fans already know that the film will feature the first openly gay superhero who will receive an on-screen kiss from his husband! However, the film has a lot more tricks up its sleeve when it comes to defying Marvel orthodoxy. 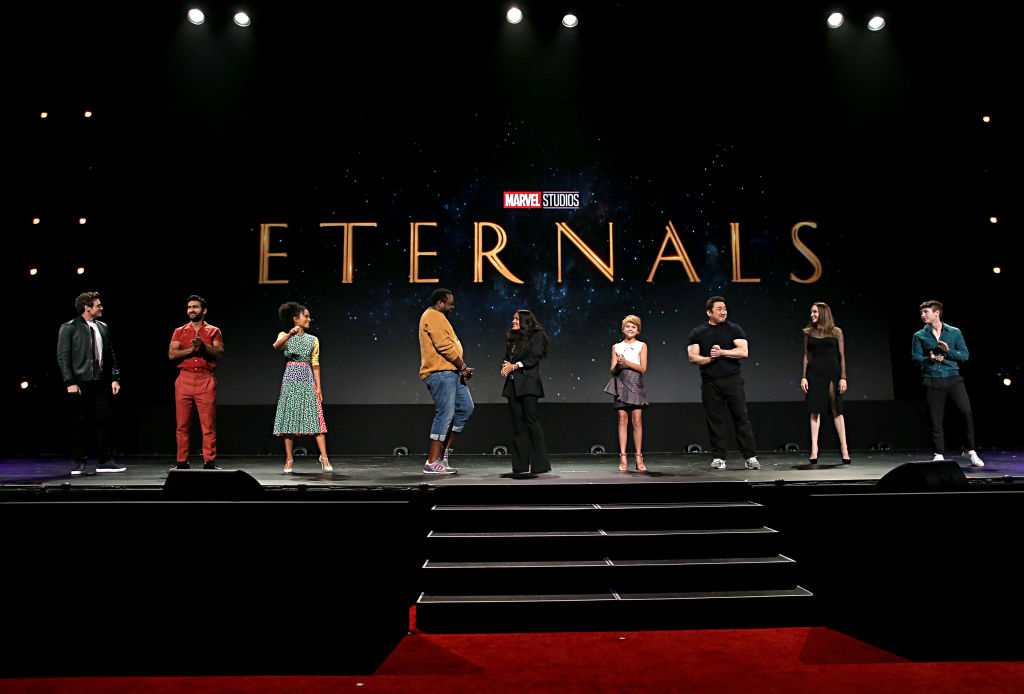 While many MCU films rely heavily on green screen magic — and all the wonder it can supply — it looks like the director behind The Eternals has a different plan. Chloé Zhao — known for The Rider, Songs My Brother Taught Me, and Daughters — will be taking a big-budget MCU film, yet reportedly is using the said budget to ensure that practical effects trump green screen magic. While many MCU movies must rely on green screen for successful fight sequences and intergalactic scenes, it looks like The Eternals will shy away from overutilizing its potential.

Kumail Nanjiani — who has been seen bulking up for his turn in The Eternals all over social media — recently spoke out about the movie, and he highlighted the director’s unique mission. According to SyFy Wire, when speaking about working with Zhao, the comedian explained:

We shot a lot of stuff at magic hour…” — a common reference to the time shortly before sunrise and sunset — ” …it looks beautiful, and it’s all mostly practical [effects], we didn’t do very much green screen at all.”

Shooting at the “magical hour” allows for natural lighting to speak for itself while shooting outside this frame often requires more editing after-the-fact. If the entire film uses mostly practical effects, it will be interesting to watch the action sequences with that knowledge in mind; imagining how intergalactic fight sequences come to fruition with minimal green screen usage will be an enjoyable exercise.

Maybe, after the movie premieres, some behind the scenes footage will make its way to the public, so fans can see how Zhao pulled off such a challenging mission. Yet, as SyFy Wire notes, Nanjiani may be explaining that the footage from the “magical hour” is low on green screen, meaning that it comes in more heavy-handed during other scenes; however, here’s to hoping this is another MCU standard that The Eternals is set to defy.

Based on the reported information surrounding this film, The Eternals is already shaping up to be another Guardians of the Galaxy — a superhero soiree with little recognition and minimal hype prior to release that came to define the landscape moving forward. From the first openly gay lead to the usage of practical effects, The Eternals is on a mission to become an eternal emblem of what a Marvel movie should be.

Related posts:
March 7, 2020 TV and Movies Comments Off on How 'The Eternals' Director Is Breaking the MCU Mold: Inside the Unorthodox Approach to Filming the Superhero Movie
Celebrity News:
Birds of a Feathers Lesley Joseph on Pauline Quirke not being on TV
Elon Musk got booed on stage at Dave Chappelles show in San Francisco
Gayle King Defends Prince Harry & Meghan Markle’s Netflix Docuseries!
Taylor Swift vs Olivia Rodrigo! | Perez Hilton
Scott Disick 'Regrets' How He 'Handled' Ill-Fated Relationship With Kourtney Kardashian As He Tries To Move Forward
Recent Posts