The cool nun on “Hunters” has split loyalty, but to whom? 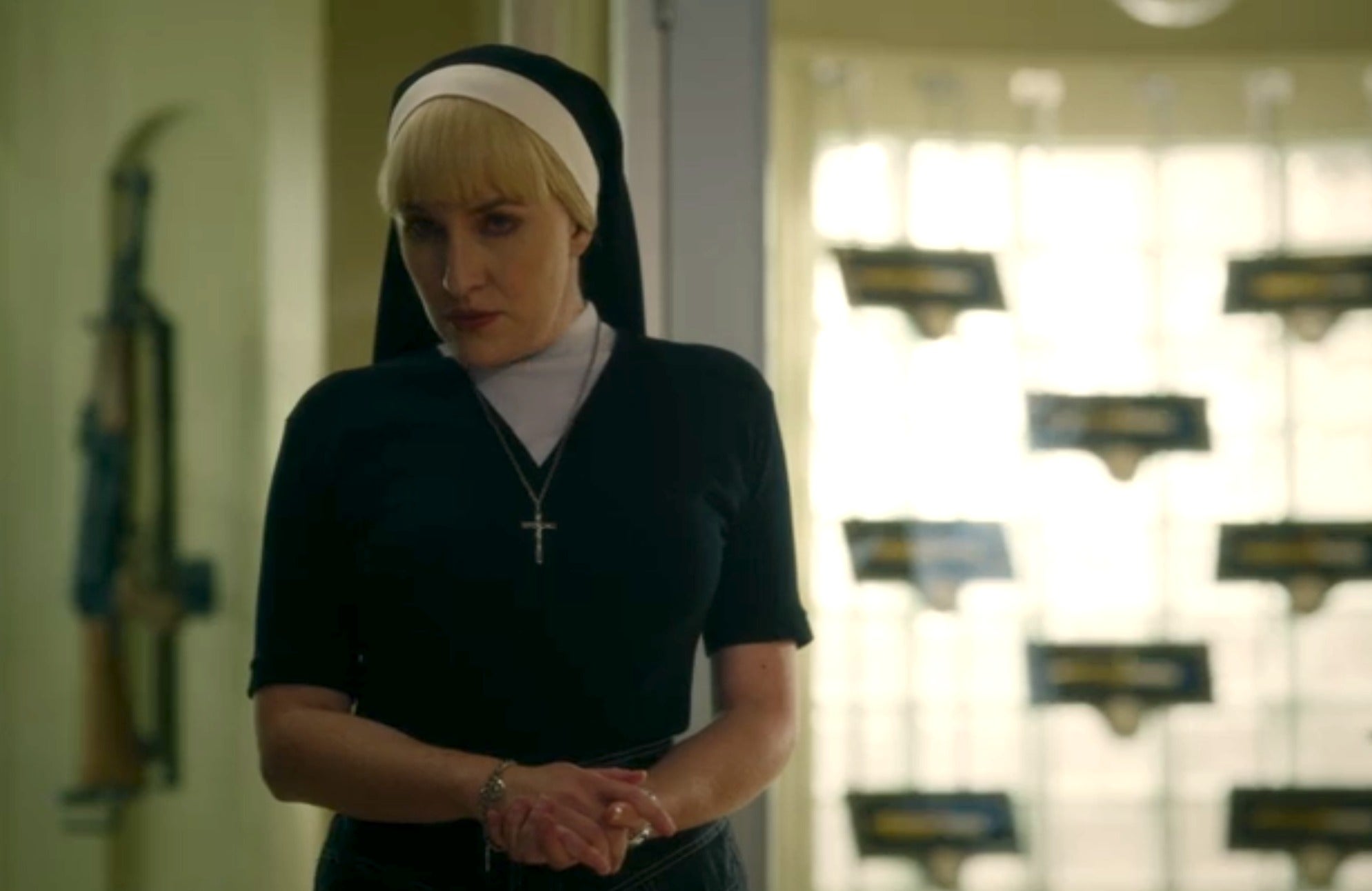 The best character on the Amazon Prime Video show “Hunters,” in my opinion, is Sister Harriet (Kate Mulvaney). Because while most of the titular hunters are pretty transparent and wear their emotions on their sleeves, Harriet hides her true feelings behind that stern nun exterior. Plus, she has a pretty intriguing personal plotline.

Season 1 of “Hunters” sorta very gradually builds up a mystery around Harriet, showing that she is also working for somebody other than Meyer Offerman (Al Pacino). Who that person or group is remains unknown, though we can make a pretty solid guess about it. So let’s dig in.

Sister Harriet is introduced as a nun who used to work for MI6 before joining this band of Nazi hunters, though we’re not given much background beyond that in the early going. The first sign that something is off about her comes in the third episode, when we very briefly see her make a call from a phone booth — in German. “They’re getting closer,” she says to whoever is on the line.

This was a weird thing for her to do, especially with the German, but it’s an obvious red herring. The Nazis very clearly have no idea what the hunters are doing, and there would be no advantage in stringing them along with a spy instead of just having Harriet wipe out the group. So if she’s a traitor, it’s certainly not for the main group of Nazis.

Then we get some more big confusion in the fifth episode, when part of the group heads to Huntsville, Ala. to hunt some Nazis who had joined NASA back in the day.

They find a whole pile of them, celebrating the Fourth of July with a giant Confederate flag and some fireworks. Once they establish that one specific Nazi is present at this gathering, Harriet finds the guy, tells him the Jews are trying to kill him, and then runs off with the guy without telling anybody else on the team what’s going on.

It looks an awful lot at that point like she’s a traitor, and a secret Nazi. But after a while it seems like she’s actually doing some kind of ruse to pump this guy for information about the Nazi’s plans. Though it’s not at all clear why she would take this approach and not tell anyone she’s doing it — her fellow hunters think she’s betrayed them.

Shortly after this, we learn Harriet’s backstory. She was from Germany originally, and her real name was Rebekah, and she’s Jewish. And when she was a kid living under the Nazis, her parents shipped her off to, apparently, a monastery in Britain, where she was given the name Harriet by her new caretaker, Sister Colin (Anna Holbrook), and presumably became a nun.

The next big scene in this arc comes when the hunters are trying to figure out what the Nazis are up to with their “solution.” So Sister Harriet takes a sample to someone she knows in the Center for Disease Control for testing. This person, very interestingly, was someone Harriet grew up with in the monastery, and she makes a crack about how surprising it is that the other hunters haven’t figured out yet that Harriet has her own secret and separate agenda.

But since this CDC woman is actually helping the hunters foil the big Nazi plot, this conversation is certainly not evidence that Harriet the nun is a traitor.

The mystery continues in one of the final scenes of the season 1 finale. We see Harriet once again in a phone booth, this time waiting for a call. She picks up when it rings, and says, “It’s important to draw open the curtains now and then. See that light still shines in the world.” She then says this was something the woman on the other end of the line always used to tell her.

After Harriet gets the woman up to date on recent events, this unknown woman says something curious. “How will you foll Offerman’s bandits to carry out our plan?” And the woman calls her Rebekah, her real name.

In the next scene, Harriet is back with the other hunters, and she proposes a new plan based on a dossier she had just received: head to Europe and hunt down some Nazis who are up to no good there. The implication being that this is the plan that the woman on the phone mentioned, or it’s closely enough related.

There’s really only one logical guess as to who Harriet is really working for: Sister Colin. It’s tough to compare voices with the telephone distortion, but there are three big clues. 1. That the woman on the phone called her Rebekah, a name that no one other than the sisters at the monastery would know. 2. Harriet spoke to her as if she was a mentor, and Sister Colin is the only mentor we know of that she ever had. 3. Harriet is actively working with at least one other sister from the monastery.

There’s no other conclusion to draw because there are no clues that point in any other direction. So either Sister Harriet is working for Sister Colin, who is in charge of some kind of spy group, or Harriet is working for some entity that hasn’t yet been introduced. But if it’s the latter, then Harriet’s childhood flashbacks would serve no real purpose.

So I feel safe concluding that Sister Colin is the boss here, though I have no clue what that situation is. Are the sisters another clandestine vigilante group of Nazi hunters? Are they a secret division of MI6? Since the hunters are apparently going to Europe next, presumably this will be explored in season 2 if the show gets renewed.

Related posts:
March 18, 2020 TV and Movies Comments Off on 'Hunters': What's Going on With Sister Harriet the Nun?
Celebrity News:
Olivia Jade on YouTube Return After College Bribery Scandal: I Just Want to Do What I Love
Jessica Mulroney Shares Text Messages with Sasha Exeter to Exonerate Herself After Last Year’s Controversy
Dolly Parton Mourns Passing of Brother Randy Two Days After Her Birthday
'RHOC’ Star Shannon Beador Says She Got Bad Cosmetic Work
Bridgerton's diverse cast was found using an 'inclusion lens'
Recent Posts
This website uses cookies to improve your user experience and to provide you with advertisements that are relevant to your interests. By continuing to browse the site you are agreeing to our use of cookies.Ok