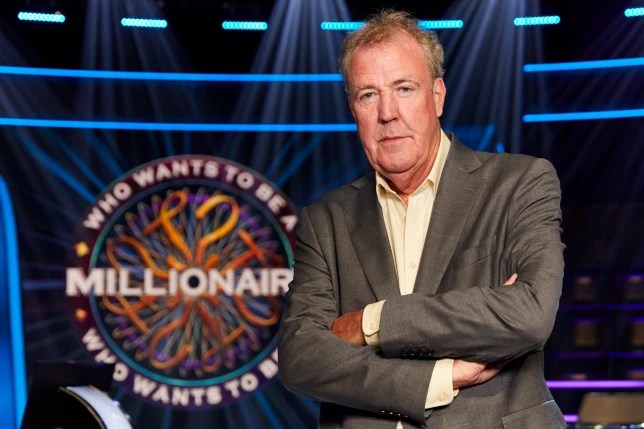 Jeremy Clarkson refuses to hug Who Wants To Be A Millionaire? contestants… because he’s actually scared they’ll end up snogging.

The 62-year-old host has revealed he doesn’t like hugging the contestants in any circumstances, including if they win the jackpot, because it is ‘too intimate’ and his ‘genitals are perilously close to theirs’.

He even stays away from kissing people as a greeting, saying it’s a ‘nightmare’ to do so just in case he ends up kissing the wrong part of someone’s face.

The Clarkson’s Farm presenter confessed: ‘I don’t really like hugging other men.

‘There’s always a sense that my genitals are perilously close to theirs, and I really, really don’t like it when they move in for a kiss, which sometimes happens as well.’

He added to The Daily Star that he ‘especially’ doesn’t like hugging women.

‘It’s too intimate and there’s always a danger that they’re going to report you to the police. Especially if you’ve only just met them in a park.’

Jeremy added that the ‘nightmare of the kiss on each cheek’ is something he ‘often’ manages to get wrong.

‘Some women think this should be an air kiss and tilt their heads way over to the side, but I always take this to mean they didn’t even want the gesture of a kiss, which makes me all stammery and nervous when we start talking.

‘Then you have those who swivel their heads too far round, so you end up kissing an ear, which is so unnerving I usually raise my head too quickly and knock their hat off,’ he continued, next recalling ‘the ones who turn their heads too slowly,’ which means the second kiss lands on their lips and not their other cheek.

The host added that he ‘always’ tells the Who Wants To Be A Millionaire contestants beforehand that he ‘will not be embracing or kissing them.’

‘They’re going to get a handshake and that’ll be that.’

Who Wants To Be A Millionaire? is available to stream on the ITV Hub.